Today’s post concludes a week of publicly available intra-day posts, my little gift to those considering a pebblewriter membership.  Sorry, but the forecast is for members only.

As announced on Monday, subscription prices will increase on January 1.  In keeping with the concept of paying for performance, the annual rate will be about $10 for each percentage point of return since the new site’s inception on Mar 22, 2012.

We’re up about 95% over those first nine months [SEE DETAILS HERE] so the new rates will be as follows:

The first fifteen to sign up for an annual membership at the current rate of $800, however, will be granted Charter Member status.  Charter Member rates are locked in for the life of the site, so you’ll never pay more — no matter where annual rates end up.

If we are fortunate enough to continue averaging a little over 10% per month, annual memberships would be $1,200+ in March.  So, locking in current prices is a no-brainer.

I remain short from 1447 on Dec 18.  Time is running out for our heroes on The Hill.  Market corrections don’t require that everyone turn bearish — just the handful in the middle whose selling turns the tide.   Those investors who have been wondering, waiting hopefully for a fiscal cliff deal to emerge from Washington… might at least a few of them decide to rein in their equity exposure today?

Watch this morning for the Chicago PMI — due out at 9:45 EST.  Last month, it turned up slightly, but was considered bearish due to the decline in new orders.  From Briefing.com:

Briefing.com puts out great graphs, such as this one on the relationship between pricing and the PMI itself.  Not a terribly bullish looking chart. 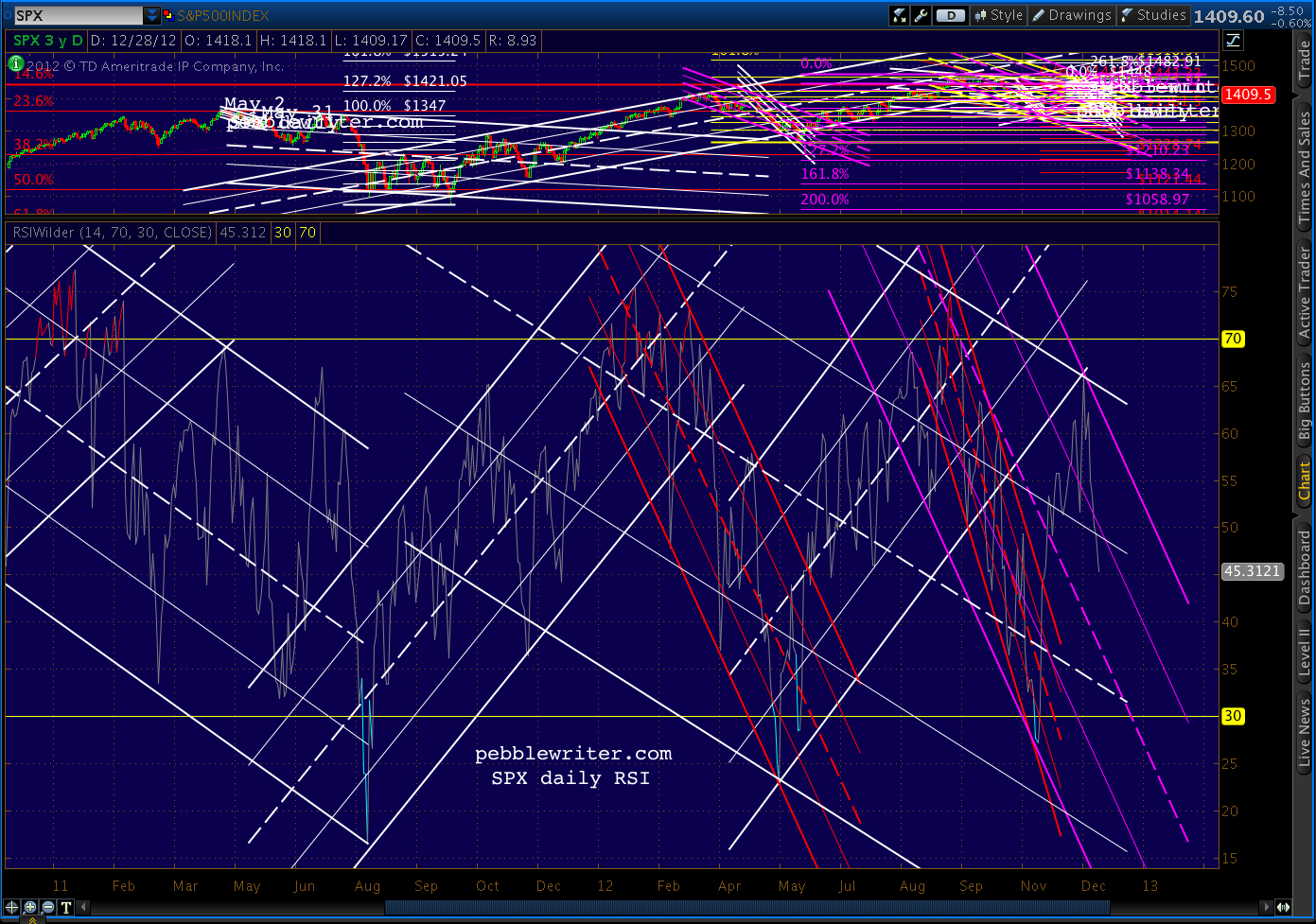 Why am I always talking about RSI? It might be the fact that it’s helped me call almost every major turn the past couple of years.  As regular readers know, I employ a deceptively simple-looking practice of channeling RSI values in different time frames.

Combined with Harmonics and other chart patterns, it has been very effective in forecasting.  Consider the past six months alone…

April 2 — Shorted:  SPX completed a Butterfly Pattern at a channel top at 1421.05.  It was also the third lower RSI value in a row on higher prices (negative divergence) after RSI tagged a channel midline.  See: All the Pretty Butterflies.

June 1 — Went Long:  SPX reached the bottom of an RSI channel, back-tested a falling wedge and found harmonic support — all at the price levels forecast by an analog that had been going gangbusters since April 9.  See: Why I’m Buying.

December 18 — Shorted:  Prices overshot our forecast target by 6 days and 10 points, completing a Gartley Pattern set up by the 1474 – 1343 drop. But, in the process, daily RSI completed a perfect back-test of the recently broken channel that had governed the rally since June.  See: CIW Dec 18.

Together, these major moves accounted for returns of about 40% since the new site’s inception on March 22.  The other 55% came from interim swings ranging from an hour to a few weeks.  But, all of them were influenced by RSI channels, which frequently provided a signal quite contrary to popular thinking. 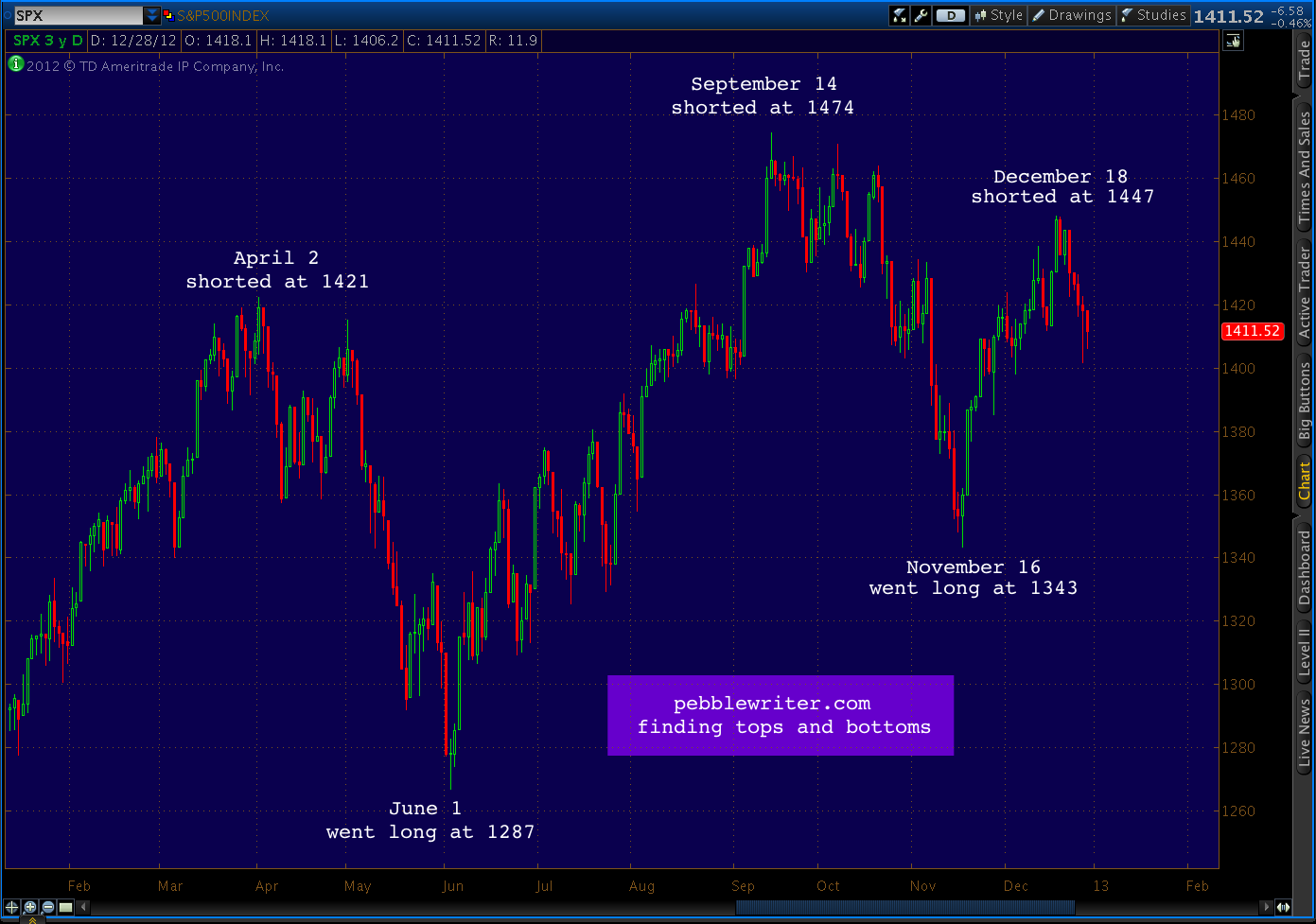 I don’t know of any analysts who use RSI channels.  In fact, a Google search for the term “RSI channel” shows a whopping 3 hits in the past month — two of them from this site.  Have folks tried them and failed, or are they just too complicated?

Though they’re almost always obvious in the rear-view mirror, RSI channels can be very difficult to use in forecasting.  Charts drawn in different time frames can suggest very different results.  They’re tough to use in choppy, directionless markets.  And, divergence is always a challenge.

In short, RSI channels aren’t for everybody.  It helps if you enjoy staring at charts for hours at a time, and can pick out patterns in a jumble of seemingly random lines.  It also helps to understand higher math, as RSI is essentially a derivative of price movements (magnitude and velocity of price changes.)

If you’re thinking about using RSI channels, you might want to start with an aptitude test — available here.  Or, just tune in each day and I’ll let you know what I think.  After a year of practice and a few thousand charts, I view them as an indispensable secret weapon.

Chicago PMI [download here] actually increased from 50.4 to 51.6 this month — though it would still have been below 50 if not for the always handy “seasonal adjustment.”

The increase again conceals a troubling development: employment and capital spending are both sliding.  New orders rebounded almost to October levels, but CapEx hit a new 28-month low, while employment plunged from 55.2 to 45.9 — the lowest level in three years.

Lest my bearish leanings sway you, here’s how ISM itself assessed the report:

The Business Barometer was guided higher almost exclusively by a sizable advance in New Orders.  In spite of the rise in the Chicago Business Barometer, five of the seven business activity indexes declined in December, most significantly the Employment Index.

In other words, any decline in New Orders — the big “winner” this month — and the whole index will head south for the winter.

The market continues the kind of slow-motion shuffle to the exits you might see in a crowded movie theater when that first whiff of smoke is noticed.

But, of course, this refers to the next leg down — not the entire move.

I don’t know whether the fiscal cliff will be deemed “solved” in the next hour or not.  I think we can all agree that whatever deal the combatants strike (if any!) the MSM will herald it as the greatest thing since tranched bread.

If so, and if it gets the right spin, the market is bound to jump.  That’s why we always, always use stops.  Always.  Stuff happens.

As regular readers know, however, I don’t think it’s going to happen.  IMO, nothing has changed in the past two weeks since I posted:

…clearly we are slipping closer to the point where a budget deal can’t/won’t be done — assuming the dem’s were ever willing in the first place.

Given the current political climate, going over the cliff might be the only way possible to reduce spending and raise taxes.  There are many in both parties who openly support the idea, and probably many more who secretly support it.

It makes sense.  Politicians know we need to balance the budget.  But, they also know their careers will be damaged if they vote for tax increases or spending cuts.  Could be that all the negotiating back and forth is for show, so neither party can be blamed for the hit to the economy that a balanced budget will necessitate (or both will be blamed, depending on your POV.)

As I’ve posted ad nauseam, any deal means higher taxes, lower government spending, or (almost certainly) both.  We can debate whether this might be good for the country’s economy in the long run.  But, there’s no question that it will stymie growth in the here and now — at the very least.

Bottom line, I don’t believe there is a “good” outcome to this mess — regardless of what the talking heads report.

How about a close right at the neckline?  Don’t be surprised.  VIX is getting so very close to tagging that important 22.23 level.  Five minutes left…  where’s the Plunge Protection Team?

Sometimes — not often enough — Mr Market can be a little predictable… 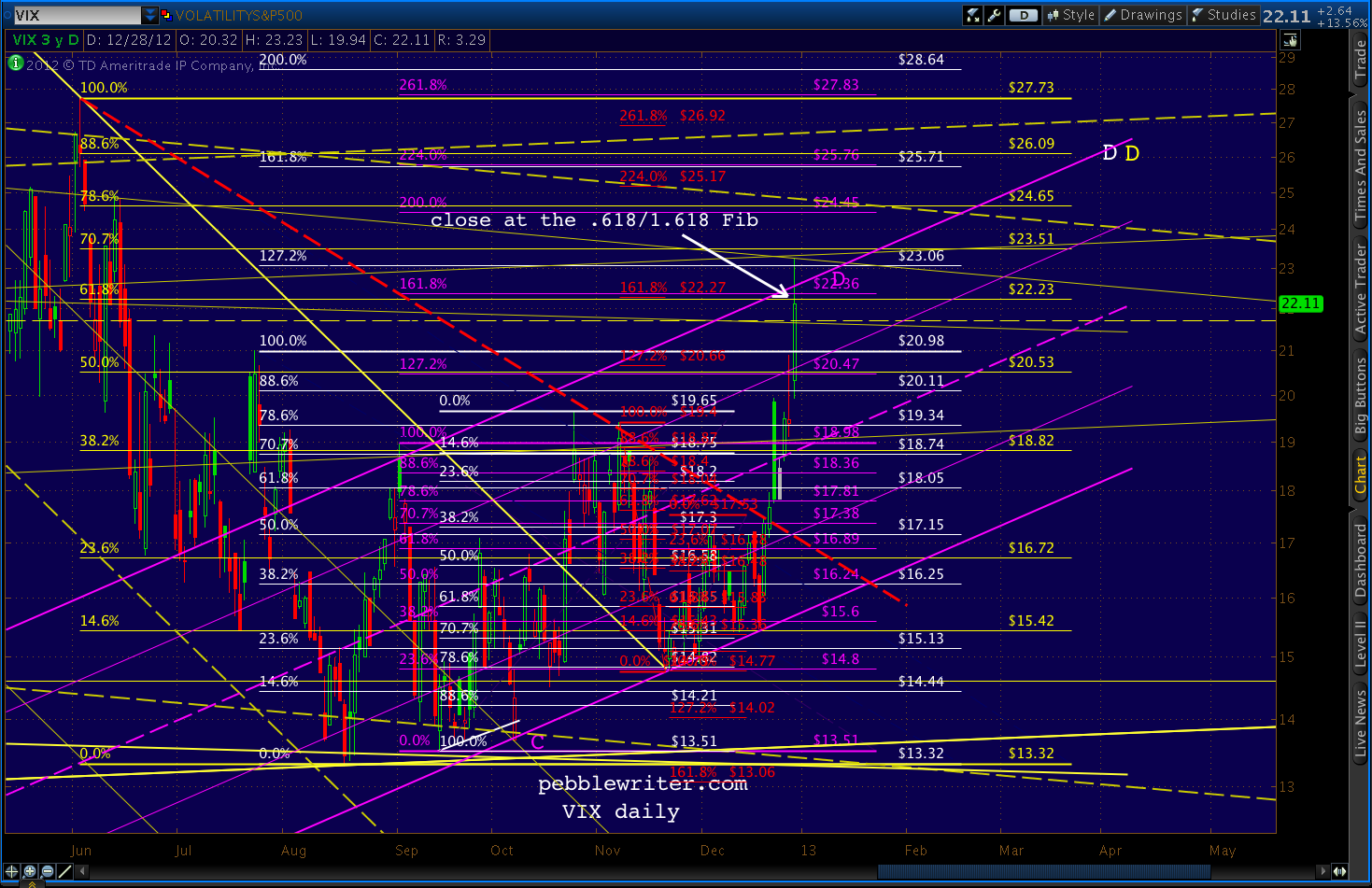 Another 3.1% for the week since our 1447 short on the 18th.  Not too shabby.  If anyone’s interested, there are still a few of those Charter Memberships left.  Click HERE.

I’ll post more later tonight.  Have a great weekend everyone!