The analog we’ve been watching since April 9 is playing out nicely so far.  We got the original bounce at 1357 as forecast, followed by a rise to the middle of our 1380-1400 target range.  The H&S pattern we expected did, in fact, set up and complete yesterday. 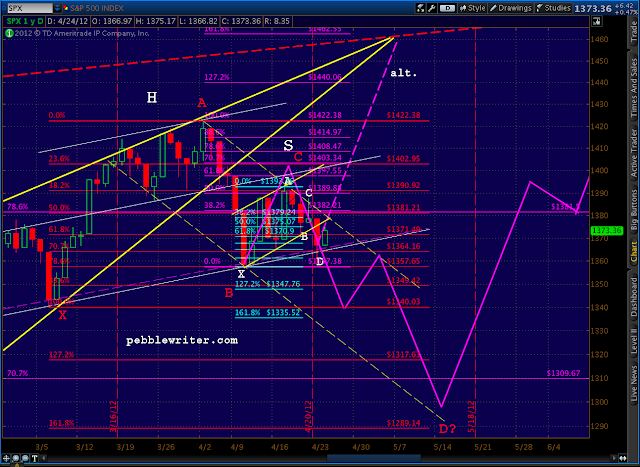 Now, we’re back testing the little channel (solid yellow) formed by the right shoulder.  It was broken during yesterday’s plunge.

As we discussed yesterday, if the wheels fall off the analog, it’s going to happen here — at the H&S neckline.  A hard bounce would likely send SPX up to tag the initial rising wedge apex at 1462-1472 (the purple dashed line.)  It can be viewed as a Crab pattern with the 1.618 at 1462 (in purple, points not marked.)

But, I think we’re more likely to see the analog continue to work.  The key will be a failure of this morning’s rally/back test and a close below 1363.  Note that we’ve also established a channel to the downside (red, dashed) that coincides nicely with the harmonic picture.