Our resolve was severely tested with two huge “pop and drops” in a row, but we were rewarded by reaching the upper end of our target range (SPX 1405.45) yesterday, closing our shorts from last week and opening a long position.

For those not incorporating harmonics into their trading strategy, I can only imagine how utterly confusing this latest move was.  In fact, the entire past six weeks have been a market maker’s dream — constant whipsawing that would have been ridiculously difficult to anticipate based on earnings, economic data or Cramer’s ranting. 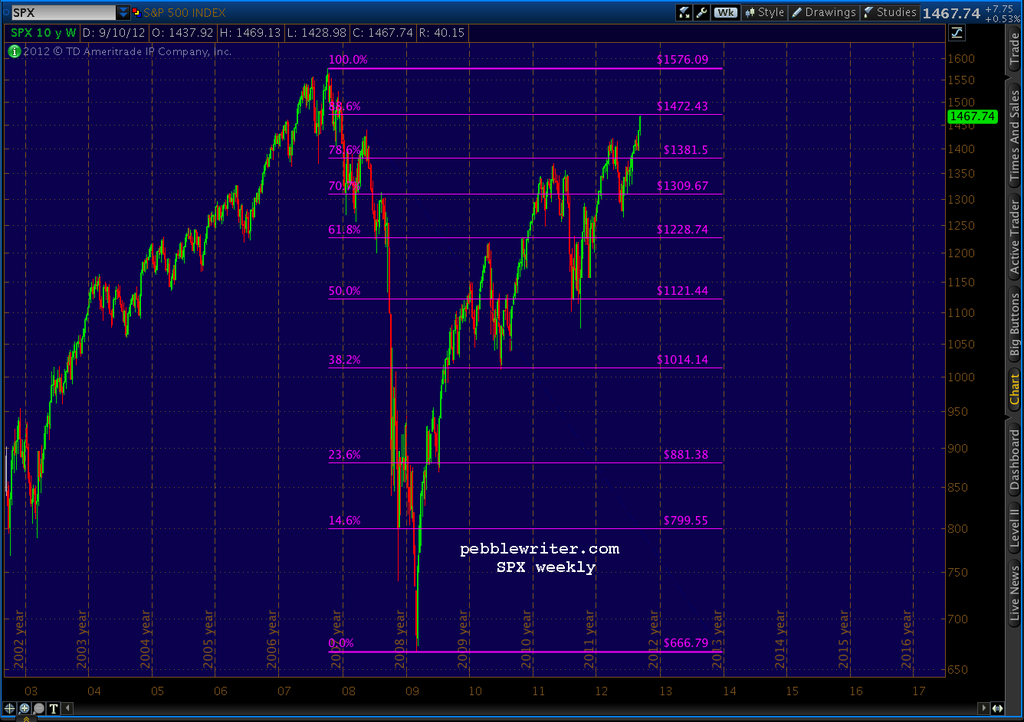 And, every reversal since then has followed the rules of ordinary harmonic patterns — with occasional assists from chart patterns (mostly channels.)  The initial drop from 1474 to 1430 was a Bat Pattern retracement and channel line tag.  It set up a Bat Pattern (in purple) that signaled a reversal at 1469.50 (came at 1470.96) and established a declining channel (in white.) 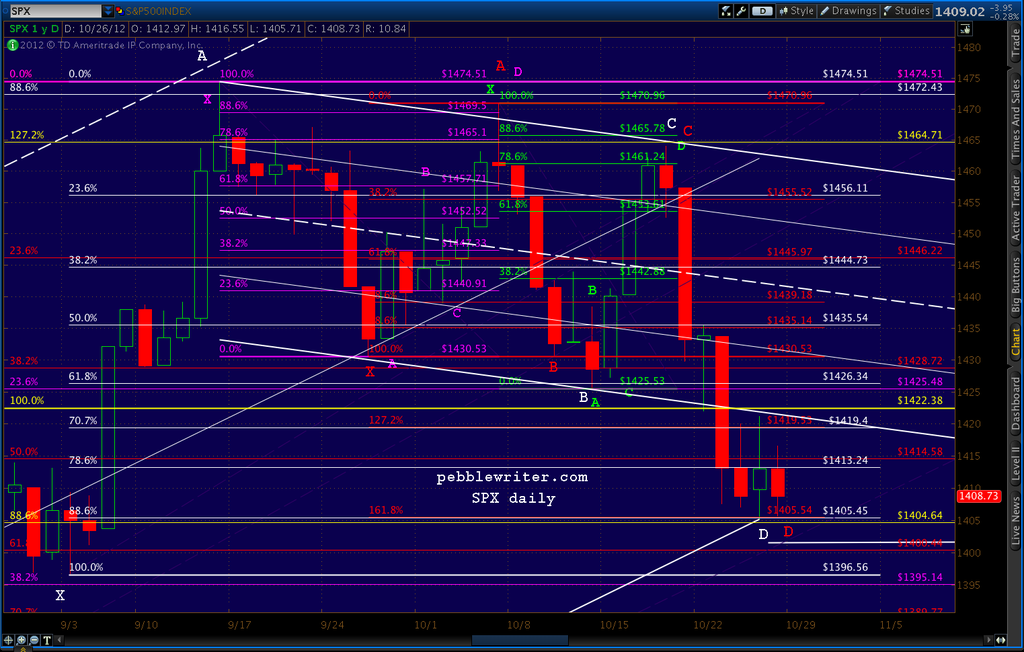 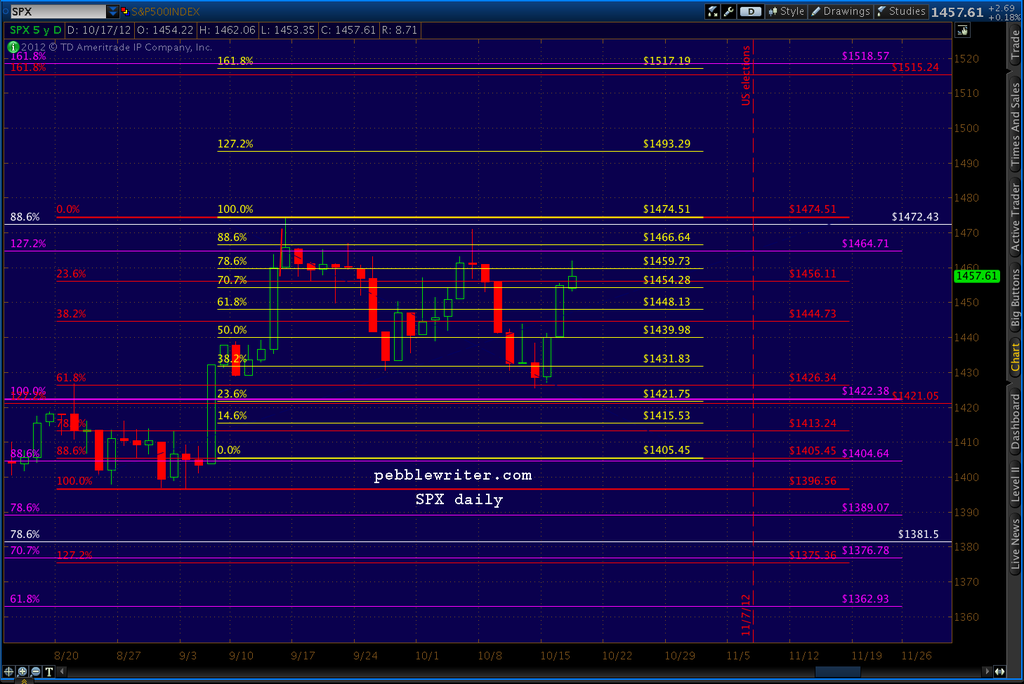 In hindsight, the harmonics and chart patterns have done an outstanding job of showing us the way — even though there were times when the direction suggested made no sense at all.  If fact, I’m pretty sure that any bad trade I’ve made over the past six weeks was the result of “knowing better.”

The question now is whether reaching our 1405 target really suggests a move to 1500+, or is it merely setting the stage for a massive bull trap?

This new analog is important not just for its capacity to protect investors from losses, but its potential for nice gains for those who don’t mind speculating a bit.

Here’s the chart I posted yesterday.  I’ll spend the next hour or so refining it and trying to better pinpoint some targets. 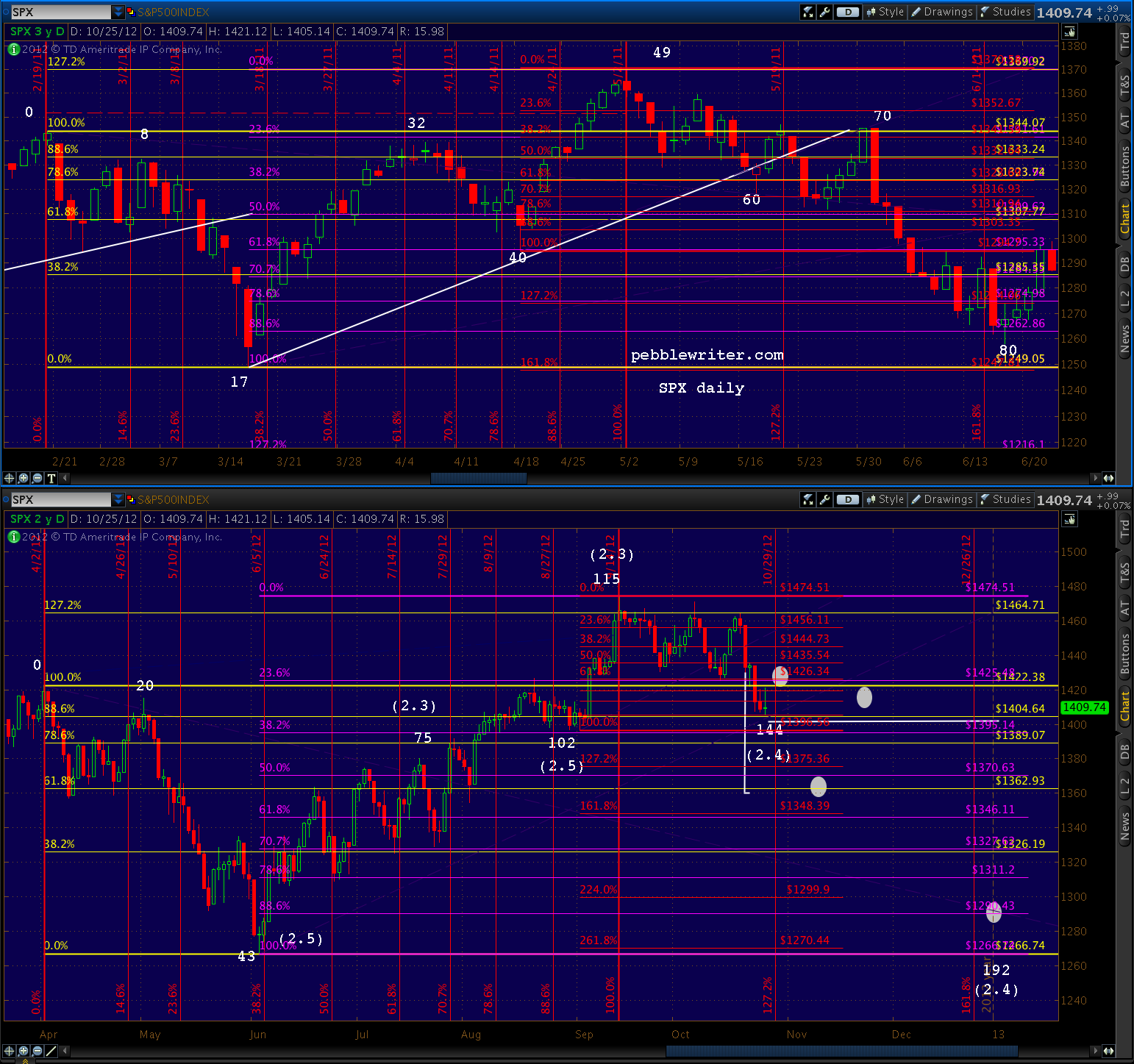 I call this a new old analog because it’s essentially a continuation of analog first posted on April 9th [see: New Analog I’m Watching.]   I noted the form of the latest move up from 1074 was essentially the same as that of the 2010-2011 bull market.

Here are the two charts, the first from last year… 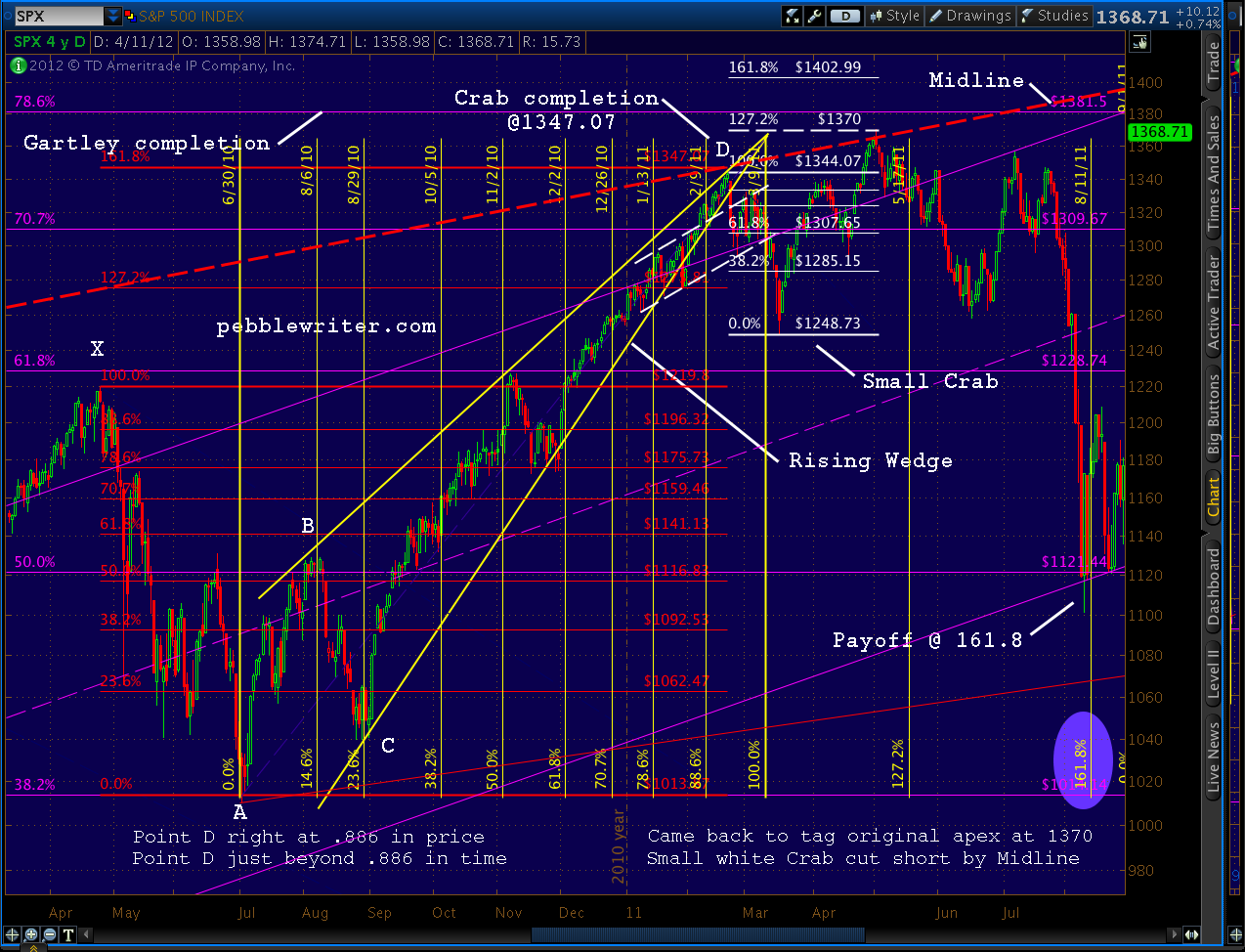 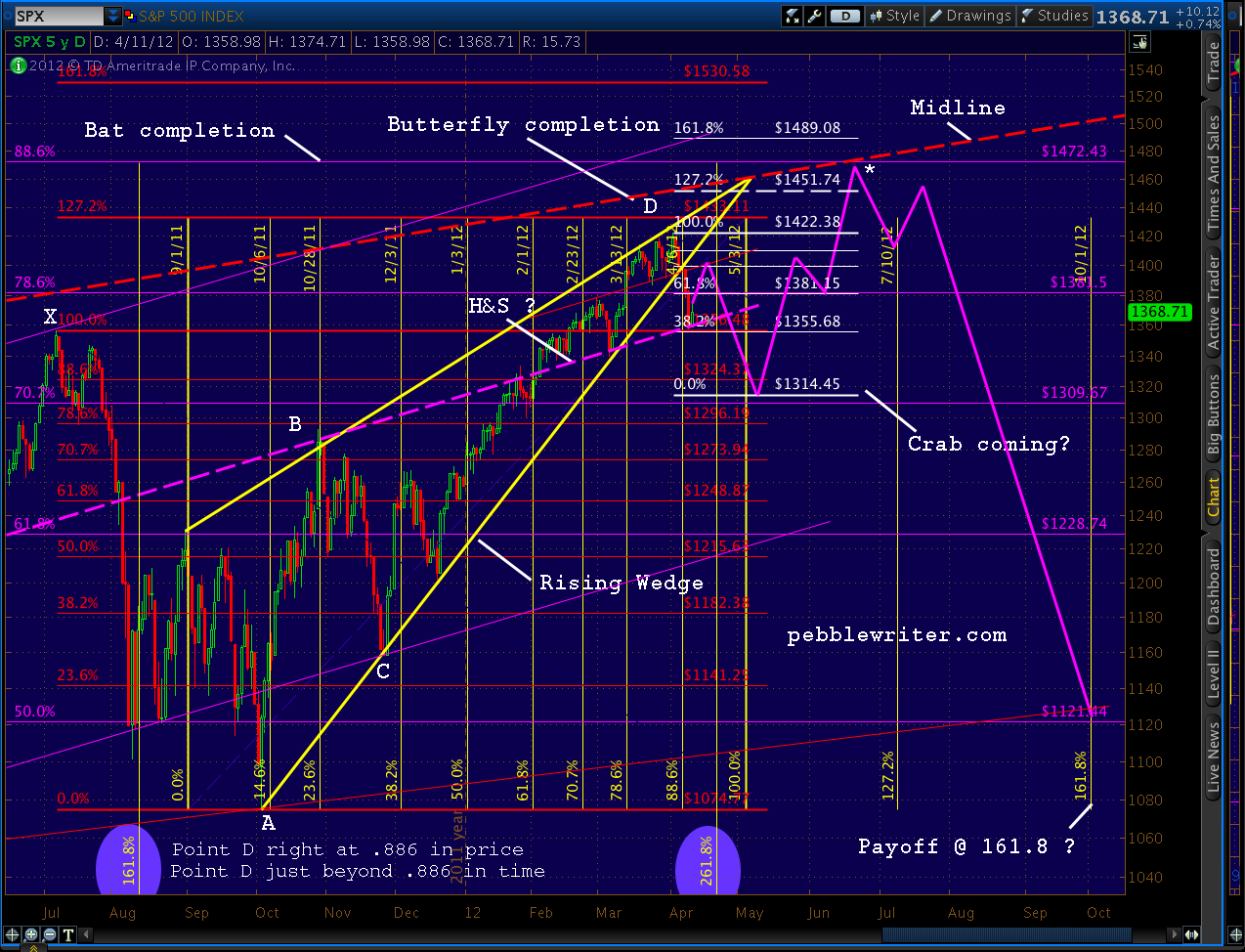 Looking back, two things really jump out.  First, the forecast for a high of 1472 and low of 1314 (later adjusted to 1292) was incredibly accurate considering it was made 5 months in advance of the pattern playing out.  Second, the forecast for the entire move to be completed by the middle of June was ridiculously inaccurate!

What I failed to consider at the time was the relative size of the two patterns.

Looks like SPX is trying to break out.  As often happens, RSI is leading the way with a break out of the red channel via the 3rd white channel in a row to sport the exact same slope on the 60-min chart.

Ordinarily, we’d expect a back test of the red channel after a break out like this — so watch for that.  Once RSI is clear, however, it runs into the top of the purple channel rather quickly.  So, I expect this move up to complete rather quickly unless than channel can be broken.  My best guess at this point is 1435 on Monday or Tuesday.

1413.50 would be a very good number to break above… followed by the little channel SPX has bounced around in for the past couple of days — that shares a TL with the falling wedge (in yellow.) 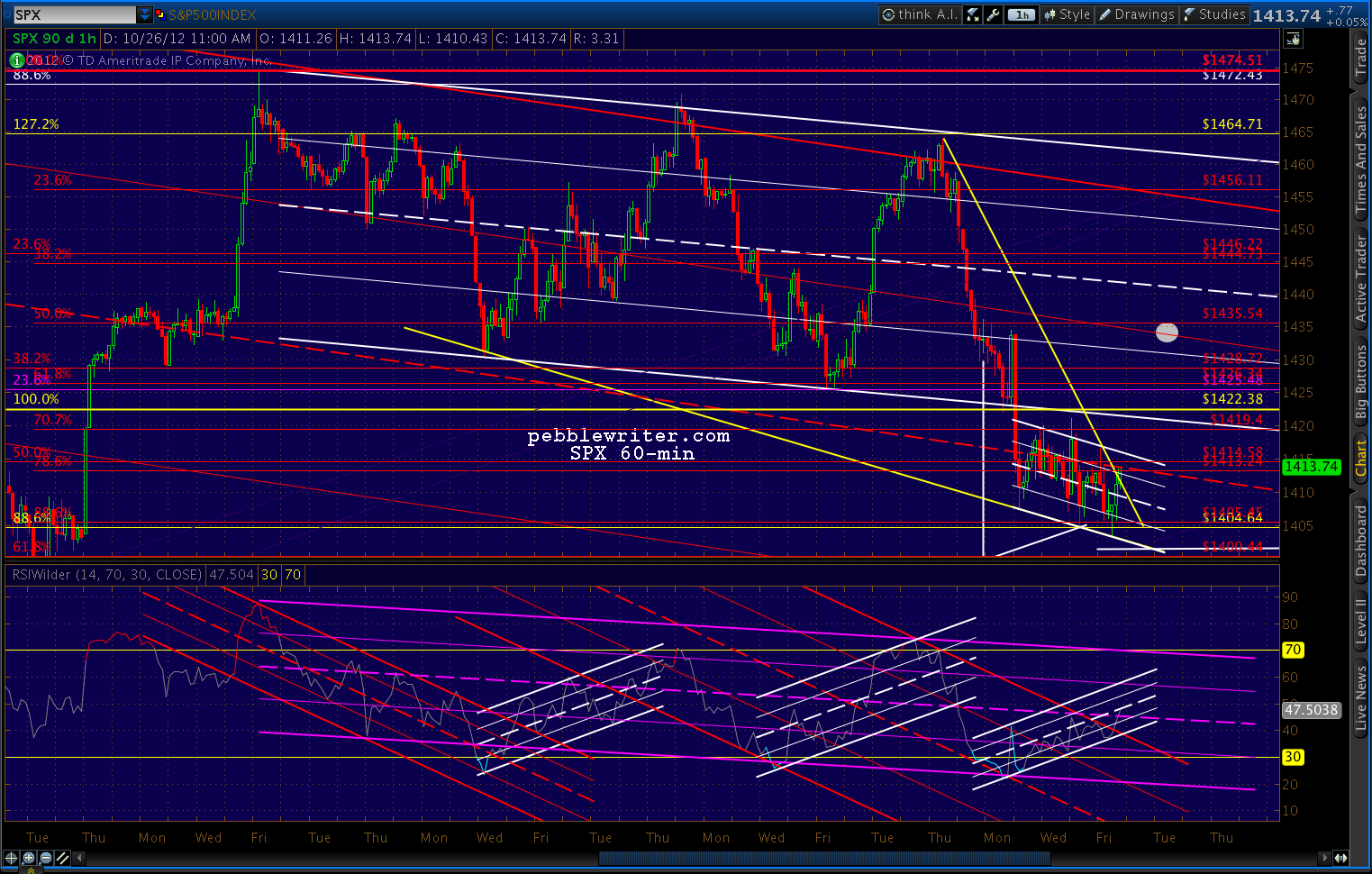 Ran out of time to get the LT charts up before the close, but better not to rush them anyway.  Look for this post to be extended over the weekend. 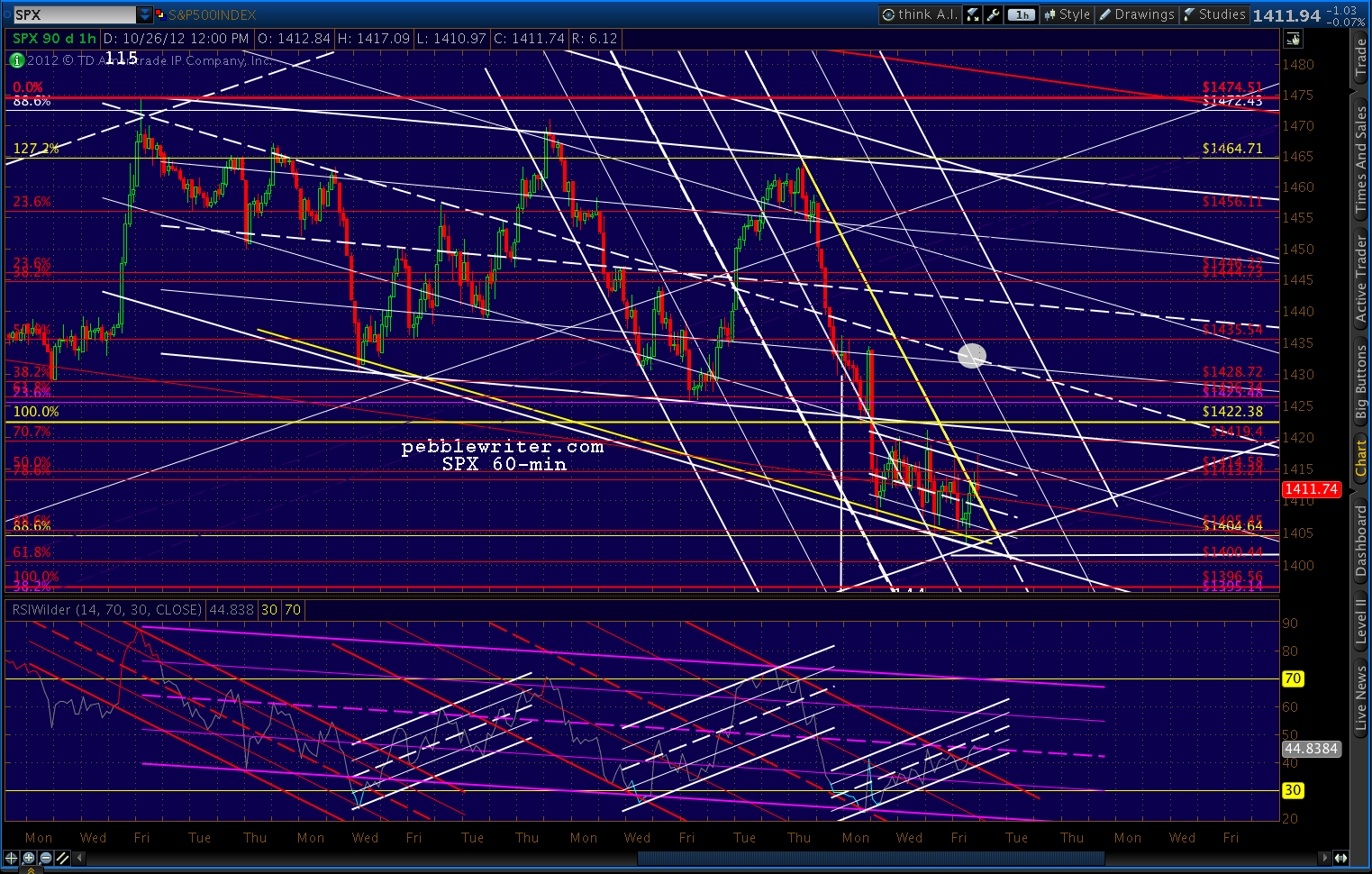 To our friends on the East Coast, stay safe.  Better yet, come visit for a few days.  Huge bonus — zero political ads in California!

I appreciate everyone’s patience regarding these charts.  I’ve worked the past four days putting them together, and was going to post it last night.  But, a family emergency interfered.

Let’s start with the big picture. SPX is testing a trend line /channel mid-line that dates back to the 1937 top — the period, BTW, that I most closely associate with the current economy. 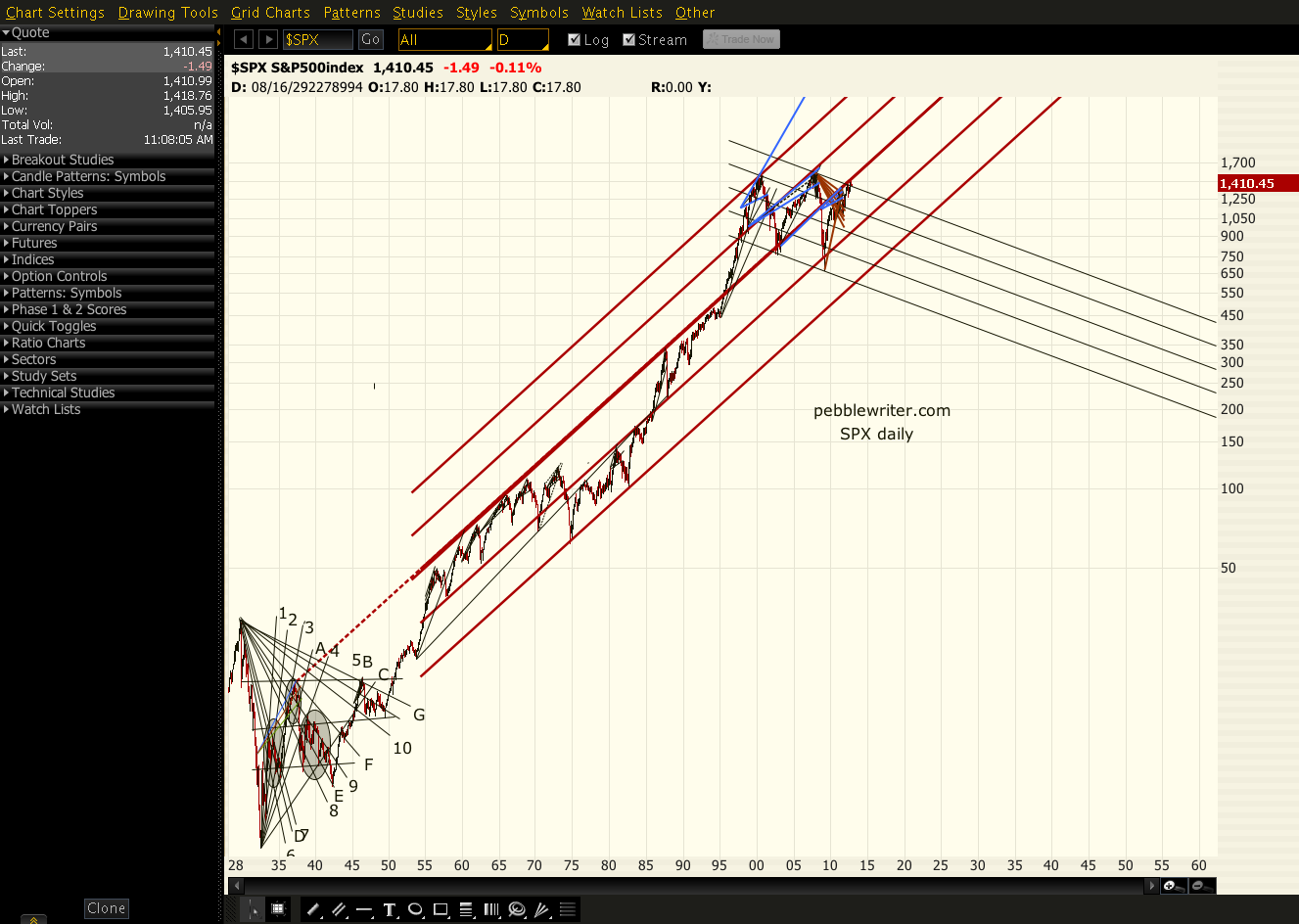 The past 20 years can be viewed as a series of parallel channels.   As we’ve discussed many times in the past, there are steeper channels within these channels, but eventually SPX falls back town to the lower bound, tests it, and breaks. 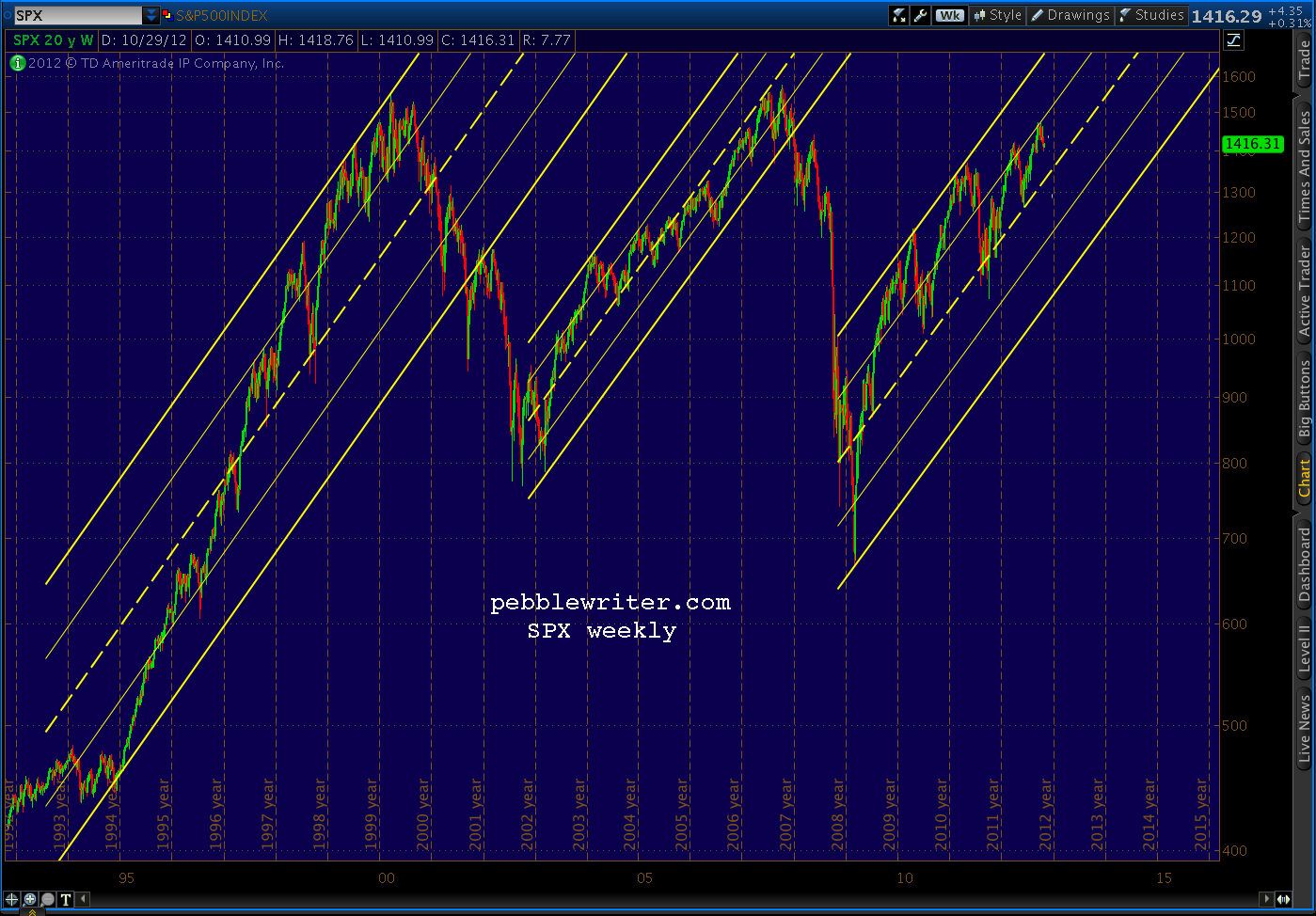 Another angle, including the corrective waves… 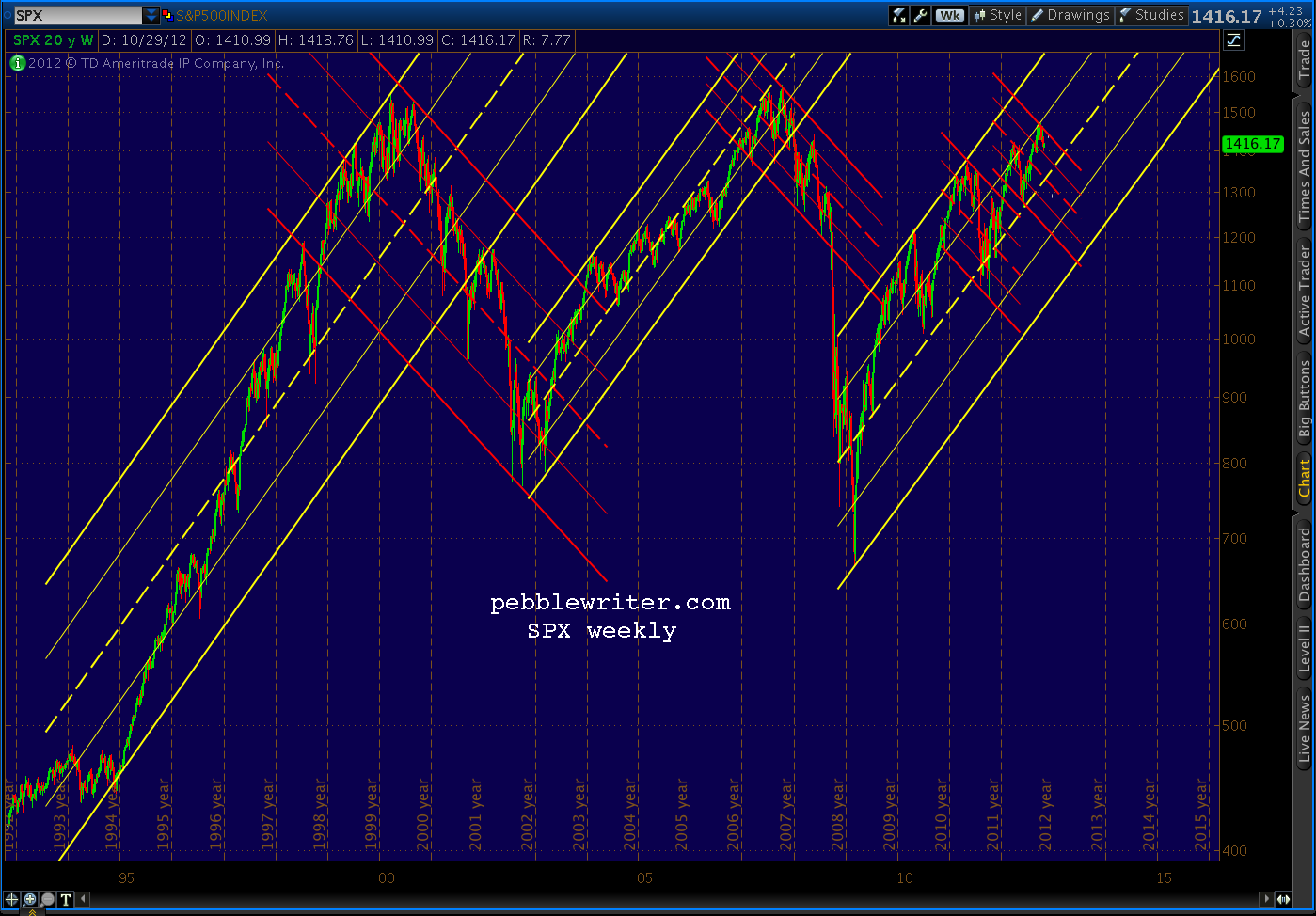 Which, like the channels up, can also be looked at as one big falling channel.  Time will tell whether or not we reached an important turning point in 2007.  But, if so, this big falling red channel takes on added significance.

For now, it’s enough to say that it’s a series of meaningful channels.  We’ll focus on the last two for purposes of the analog. 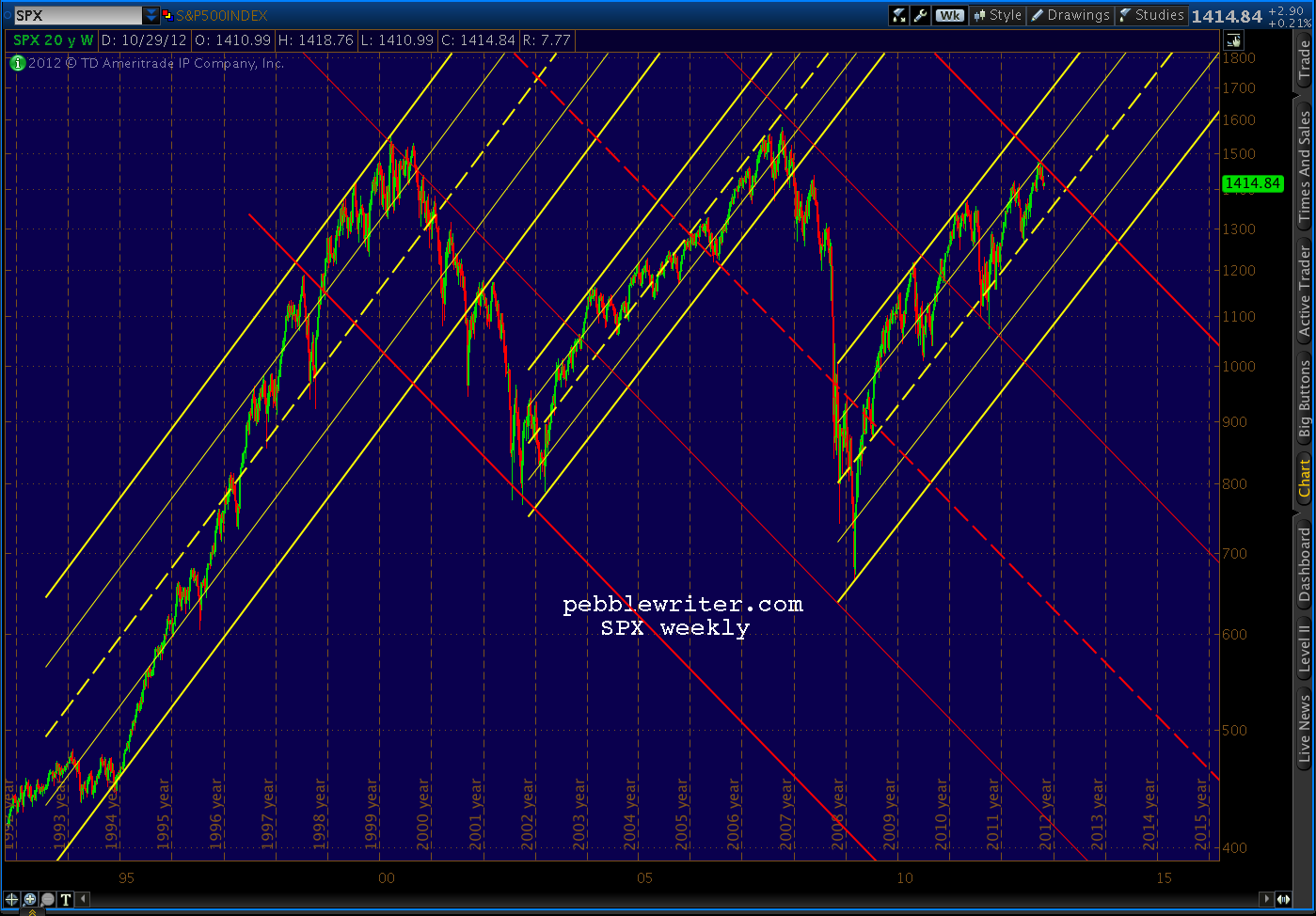 Here are the two periods we’ll concern ourselves with for the moment.  They take place within the upper half of the latest yellow channel.  If the analog continues to hold, the larger period highlighted on the right will perform as the one on the left.

A quick note: some prefer the term “fractal.”  They are, for all intents and purposes interchangeable, though fractal is somewhat more correct as it implies a change in scale — which is the case here.  I’ll stick with “analog” for now, just to avoid confusion with respect to previous posts.

If the analog holds, the current pattern will form a pattern something like this: 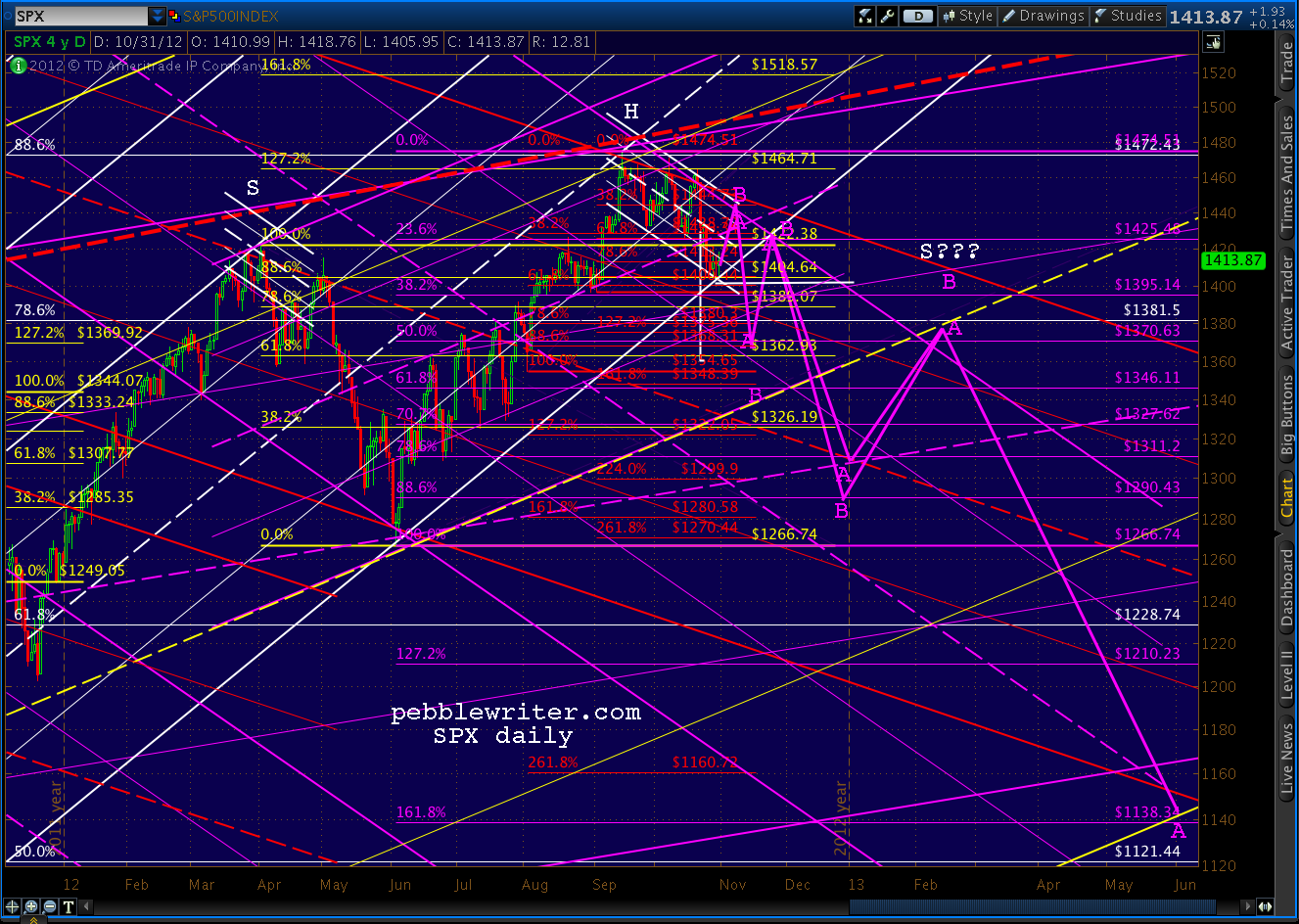 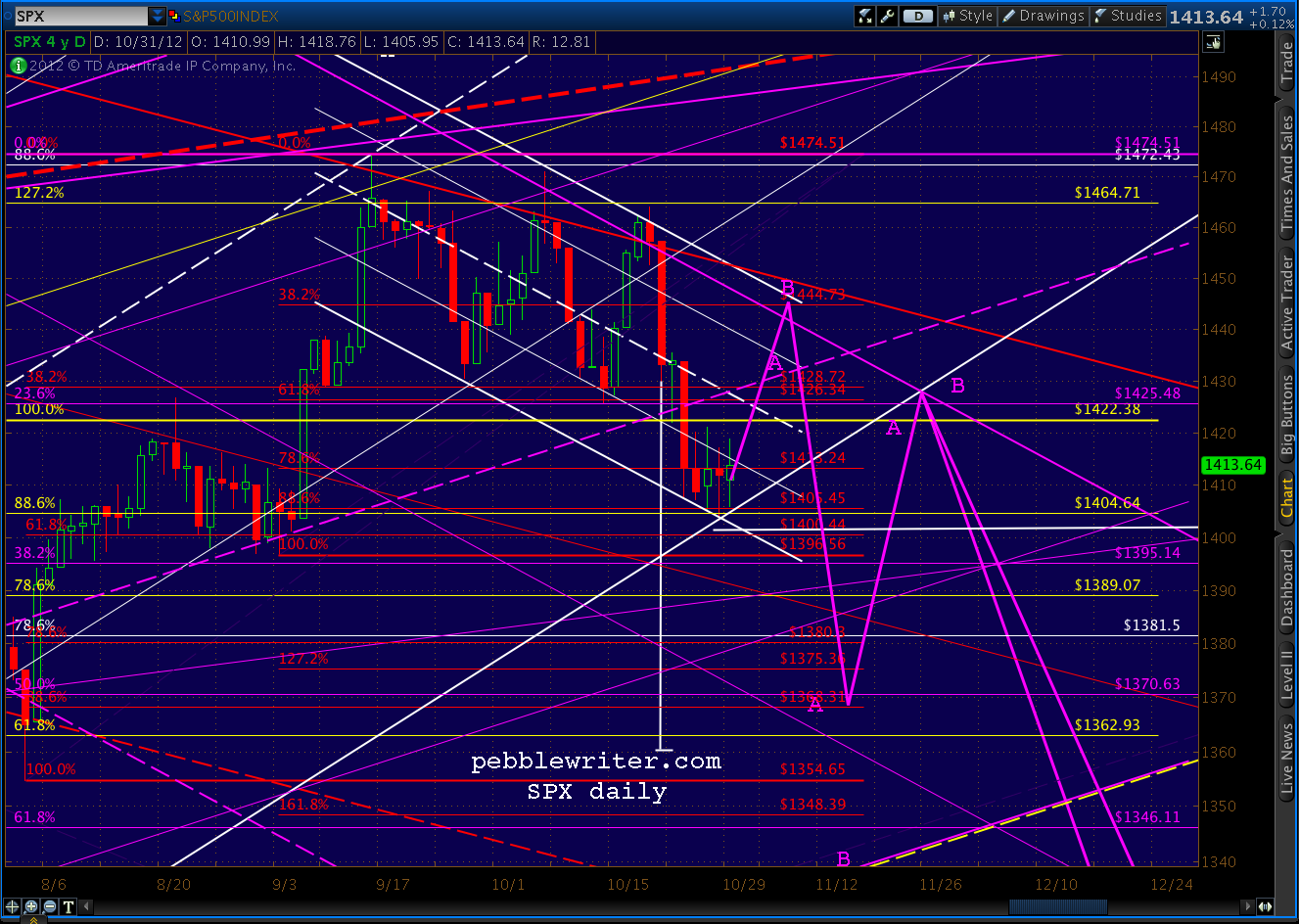