I received an excellent question from a reader this morning and found myself pouring a little more into the answer than usual.  Maybe the answer — which swerves headlong into the issue of whether chart patterns work — deserves its own post.

The reader suggested that the Fukushima earthquake in Mar 2011 was the cause of the market’s decline and, since such a huge event was unlikely to repeat in our timeline, the current analog we’re following is unlikely to play out.

While the earthquake obviously helped the market along, SPX started down in February 2011 because: (1) it was very deep into a rising wedge; and, (2) it had completed a huge Crab pattern that started with the April 2010 sell-off; and, (3) it had just completed a H&S pattern.  The following chart clearly shows all three patterns. 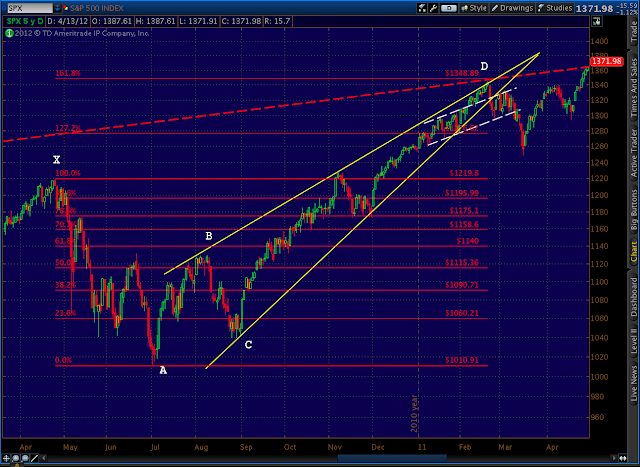 Before Fukushima came along…

From months earlier, the Crab pattern (red, with key points in white) had forecast 1348.89.  We had reached 1344.07 and were already reversing as typically happens.

And, the Head & Shoulders pattern (dashed, white) had already completed.  It targeted 1250, which is exactly where we were 8 sessions later.

But, perhaps the strongest reason had SPX turned tail at 1344 was because it had just tagged a trendline (bold, red dashed) that dates all the way back to 1935.  This TL is actually the midline of a channel that, with very few exceptions (mostly from 1997-2002) , has contained all the major market moves back to the Great Depression. 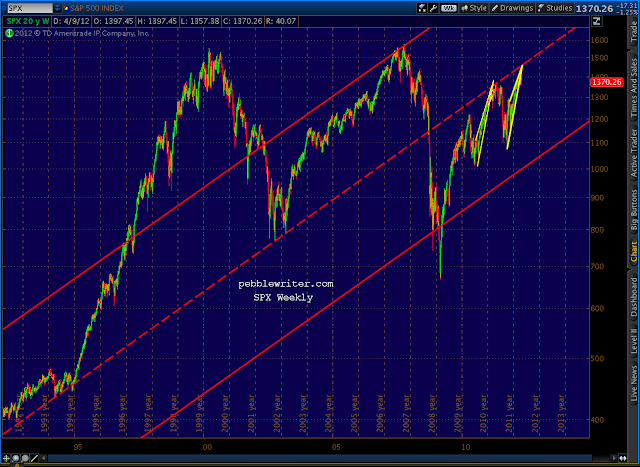 This midline had been support for SPX since 1991, but became resistance when SPX fell back through in September 2008.

The market continued to do what these chart patterns had already predicted.  In fact, six sessions after Fukushima, the market had completely recovered — reaching the May 1370 high only 29 sessions later. Stay with me, now, because this is where it gets interesting.

On May 2, SPX was on its way to completing that big Gartley pattern.  After 910 points down, and 704 points back up, SPX was a mere 11 points from completing a very well-formed Gartley at 1381.50.  Nothing could stand in its way — except that annoying midline, again. 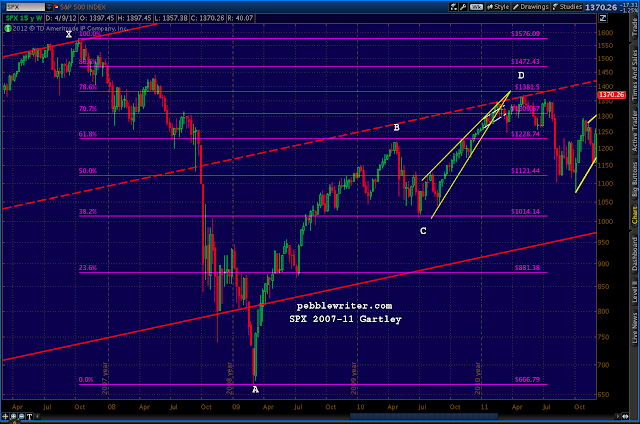 Nine weeks and a Bat pattern later, SPX began its 255-pt swan dive — just as the analog said it would.

With the backstory out of the way, stay tuned for Part 2 in which we discuss how the analog predicted last July’s crash (and what lies ahead.)

I was moved to start the pebblewriter blog on May 2, 2011 because I was convinced we were nearing a top.  I knew nothing about analogs, but I knew chart patterns and was starting to learn about harmonics.  So, I posted:

And followed up a few hours later, adding:

Of course, I had no idea when I wrote those words that the top had just occurred an hour earlier.  And, I was dead wrong about the minimum loss coming.  Instead of 320 points, SPX fell only 269 points (oh, well.)

The analog came to me as the result of my obsession with patterns.  The basic chronology of my observations (with links to earlier posts) was as follows:

On June 3 [Here We Go] compared the market action between the patterns as related to breaking and backtesting the long term support trendline.

“…once it drops below its long-term support, looks like it’s in for a free fall.  But, it eventually finds new support in a parallel channel as I theorized a few days ago.  The bottom of the channel is drawn off a recent major high and the top is drawn off the two most recent peaks.  It pencils in nicely for 2000 and 2007…”

On June 12 [Update: Channel Surfing] reported that almost every major top since 1928 exhibited the same pattern.  I suggested that the pattern was not only characteristic of tops, but a requirement.  I formalized the description as:

“…characterized by a multi-month pattern within a rising market that has at least two significant touches (of the index or its Bollinger Band) of at least 1.5 standard deviations on the upper and lower extremes of a regression channel commencing after a post-correction new high.  It’s capped off by a third touch on the lower boundary and subsequent return to at least the midline before a final plunge to new lows. “

On June 21 with SPX at 1294, [A Different Perspective] discussed how a return to the pattern midline around 1327 and subsequent fall would create a huge head and shoulders pattern that, by mid-August, would begin a decline to around 1200.

On June 23 [Deja Vu, All Over Again] showed how the 2000 and 2007 patterns corresponded, beat for beat, and charted the various trend lines that would govern the pattern’s completion.  With SPX at 1287, the pattern still indicated a 1320-1330 target.  I reiterated the pattern prediction the following day in the midst of the 25 point intra-day plunge triggered by the strategic petro reserve decision.

On June 26, [Cliff Diving] defined the decline from 1370 to 1258 as 1 of (1) of P[3], and the subsequent rise a corrective wave 2.  I suggested the pattern interim target might also follow Fibonacci guidelines.  The midline, at 1322, was virtually the same as the .786 Fibonacci retracement line.  With the market back to 1268 and bearish sentiment through the roof, I suggested the pattern would take us up 54 points in 5 days.  It took 4.  As I suggested on June 29, we would likely even overshoot (we did, hitting instead the .886 Fibonacci retracement at 1356.)

In June 29th’s post [Lunatic] I restated that contrary to popular opinion, the rally would not lead to new highs, but would merely complete a corrective wave 2, followed by wave [i] of 3 to around 1300.

On July 4, [Final Destination] suggested the next move down would stop north of 1298.61 in order to keep the bullish count alive.

On July 7, [Confidence Fairies] and [Then and Now] suggested we had reached the pattern high at 1356.87 right at the .886 Fibonacci level.   The next day began a 5-day, 46-point decline.  In [Friday the Bear Came Early], I suggested the peak was in — earlier than the 87-day cycle would indicate because that’s what happens in market tops.

When a big decline the next morning was quickly reversed and seemingly everyone turned bullish [She’s Come Undone]  explained this was simply a throw-over, and that the pattern 1-standard deviation line had stepped in for 2007’s channel midline in defining the top and preventing any further advances.  The McClellan Oscillator gave a warning.

On July 11 [The Deathly Hallows] with SPX off 24 points at 1319, I theorized that the -1 standard deviation channel line at 1299 would catch the fall — supported by the H&S target, a key Fibonacci retracement and fan lines.

On July 20, I posted about an inverse H&S pattern forming that would signal a huge updraft, but felt we would end up 10 points short — as happened in 2007 [Ten Lousy Points.]  In reality, we would end up 8 points shy.

The next several posts were simply warnings of the impending fall.  [Merry Christmas] warned that July 21 was the equivalent of December 24, 2007.  [Pulling the Trigger] on the 21st correctly advised that…

“1347 might be the last best chance at an excellent short.”

“Those who have been following this blog for any length of time know why I’m wishing you a Happy New Year in July.  Under the 2011 is 2007 theory, tomorrow is the equivalent of December 31, 2007.”

SPX was off 27 points the following day, and ten sessions later, bottomed at 1101.  It was  down 269 points from the day I felt moved to post that it looked like the market was topping in a way that was similar to 2007.

Did the analog play out precisely as did 2007?  I’m too lazy to tally all the data points and calculate it; but, just spitballing, I’d say it was about a 95% correlation.  We could point to the damage done by Fukushima, the US downgrade, the troubles in the Euro Zone, S&P’s GDP revision, etc., but how could we possibly explain those events falling on the necessary dates in order for the 2007 pattern to repeat so precisely?  Exactly.

When all is said and done, I believe the analog played out as scripted because the same conditions were in place as in 2007/8.  The rising wedge, the harmonic patterns, the various H&S patterns, etc. worked the way they were supposed to.  And, people being people, their reactions to rising/falling markets was the same each time.  Fear and greed will always be with us.

At any time, a black swan event might have come along and knock the analog off track.  As I watch some of the current analogs play out, I’m wary of the countless curveballs that might come our way: downgradings, upgradings, wars (trade and/or shooting), earnings surprises, elections and the ever-present threat of more QE.

Analogs are a process.   They take time, as my daughter whose basketball game I missed today could tell you (hopefully, she’ll forgive me when it comes time to write college tuition checks.)  Done correctly, we won’t discover nearly-complete analogs days from paying off.  We’ll find them weeks or months in advance — seeing similar patterns setting up, watching for divergence.

The ones I’m watching now look very good — including the one posted below.  In the days ahead, we’ll find out just how good.  Some will work, and others won’t.  But, in an investment environment where so many forces are working to manipulate the markets for their own financial and political gain, I think analogs represent an excellent way to make money.

I’ve been watching several analogs for the past several weeks, and this is one screaming the loudest just now.

As always, an analog makes a lot more sense when there’s a plausible case to be made for the expected path forward.  That was certainly the case last year, when I posted extensively about the 2007/8 as 2000 analog [see: OMG, WTF and Money Back Guarantees and Happy New Year.] I believe this one qualifies, though there are a few hoops to jump through first. 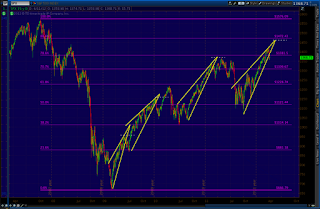 While completion of the Crab pattern which might set up by then would indicate potential to 1489, I believe the .886 Fib of the Oct 07 – Mar 09 decline (a Bat pattern) will step in to prevent a rise in excess of 1472.