Sometimes you just can’t catch a break.  TSLA shares rose from 22 in 2012 to 387 in 2017 — helping drive Musk’s net worth to well over $20 billion.  But, the shares have since formed a triple top, failing to top 390 and coming perilously close to breaking down. 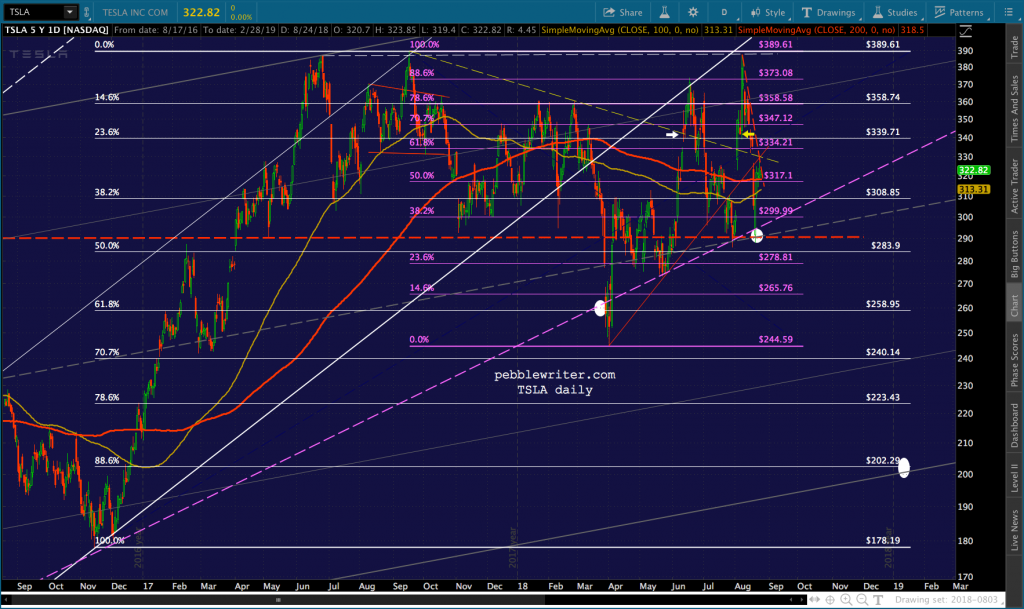 This isn’t the first time Musk has faced such a challenge.  The stock spent three years trying to crack 290 – the red trend line below. 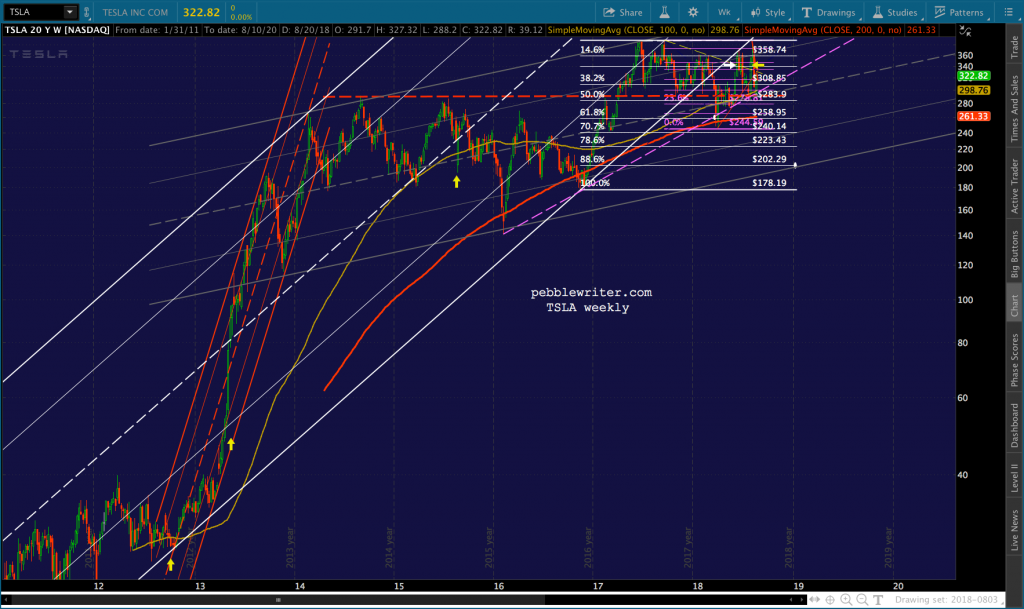 We’ve documented past interventions — which have, by and large, been successful.  Musk’s well-publicized $25 million open market purchase (the white arrow) on June 12-13, for instance, saw the stock gap past the .618 Fib level and a trend line connecting recent highs.

It was a nice gesture and helped divert attention from the mass layoffs announced the day before.  But, it didn’t take long for investors to realize that while $25 million is a lot of money to most people, it represented only 1% of Musk’s net worth.  And, it increased his holdings of the common stock by a pittance (0.2%.) 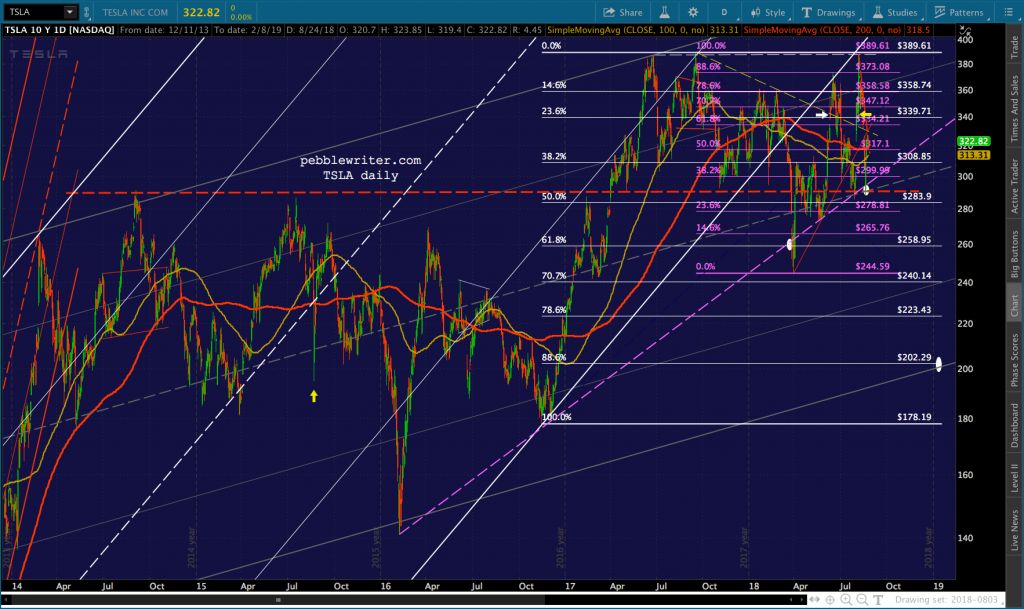 It’s pretty obvious why Musk did it.  After breaking above 290 in April 2017, the stock had fallen back below it in March 2018.  The 200-DMA, rising white channel, and purple trend line all broke down in the process.

After a miraculous, tweet-aided recovery, Musk got the stock back above the red trend line.  But, he needed it above 390.  It was not meant to be.  Too many missteps, too many worrisome headlines.  The best it could manage was a backtest of the broken white channel and the .886 retracement of its drop from 389 to 244.

The stock slipped back below the red TL and 200-DMA, eventually bouncing off 290 yet again in late-July on news of a major new factory to be built in Europe.  The company’s earnings call a few days later featured a well-behaved Musk, a revenue (obviously not income) beat, and a promise not to float additional additional shares.

Musk: We do not — we will not be raising any equity at any point, at least that’s — I have no expectation of doing so, do not plan to do so … And we certainly could raise money, but I think we don’t need to and we — yeah, I think, it’s better to — it is better discipline not to.

Again, the stock gapped higher — back above the 200-DMA and the yellow trend line.  But, the naysayers weren’t having any of it.

Despite having produced the promised number of Model 3’s, the company was dogged by reports of quality issues and was losing money on every sale — even though these were the higher end models with potentially larger profit margins. 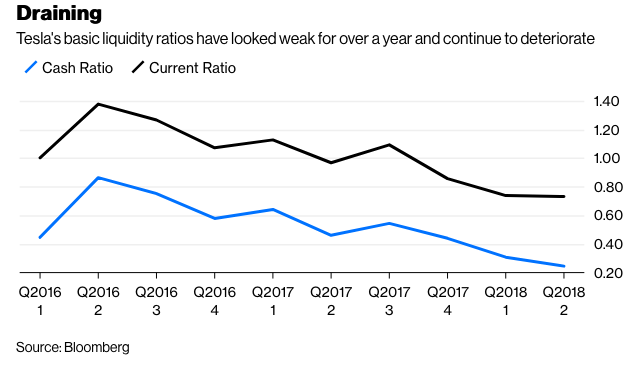 This was apparently the point when desperation set in.  As we discussed at the time [see: Is the Pressure Getting to Elon Musk?] it was fairly obvious to any competent chartist that Musk’s going-private tweet — like all the others — was designed to get the stock over the latest hump. 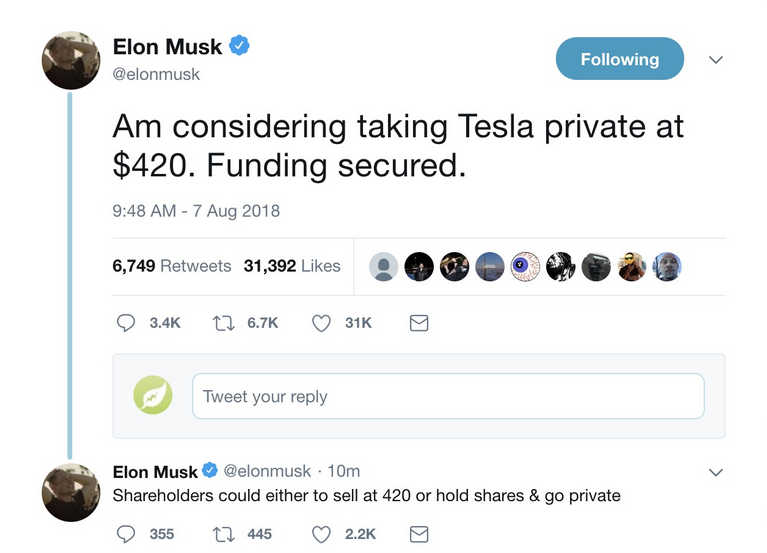 It didn’t take long for Tesla watchers to question the deal.  The financing was supposedly secured, but no one stepped forward.  The board seemed genuinely alarmed.  Shorts launched lawsuits.  And, the SEC announced an inquiry.

The latest rally ran out of steam at 387 – just shy of the September 2017 highs.  The stock tumbled back to the red trend line yet again.  It bounced, but that was before Friday night’s (11pm Friday night, following Thursday’s decision) admission that the going-private transaction was dead in the water.  As of this morning, the stock is heading back toward 290.

Despite my cynicism, I’m rooting for Elon and Tesla.  We obviously need alternatives to carbon-based transportation for many reasons.  But, the stock is at these lofty levels based on the (aging) premise that it’ll soon be self-funding and turn a profit.

The shorts are right to question this premise.  But, anyone who shorts at these levels, before the stock breaks down below the tangle of support at 290ish is ignoring the obvious — this is a CEO who will do whatever it takes to prop up his stock.

TSLA might ultimately come crashing down.  But, I would absolutely wait until the purple trend line and horizontal support break down before jumping on board.

Now, on to the rest of the market.