The market is parading around in yesterday’s Apple earnings report like a glamor queen in a mink stole.  An economy that can pump out eleventy zillion iPhones is very pretty, indeed.  Then, along comes the stink of a very disappointing durable goods report.  And, that mink stole is suddenly, jarringly out of place in this economic favela.

It was a nice overnight ramp.  It’s taken us past the channel line we identified as key for the bears in yesterday’s analog update.   But, is this the hard bounce at the neckline we’ve been discussing?  Is our alternative playing out (the purple, dashed line) or is this yet another in an endless series of head fakes? 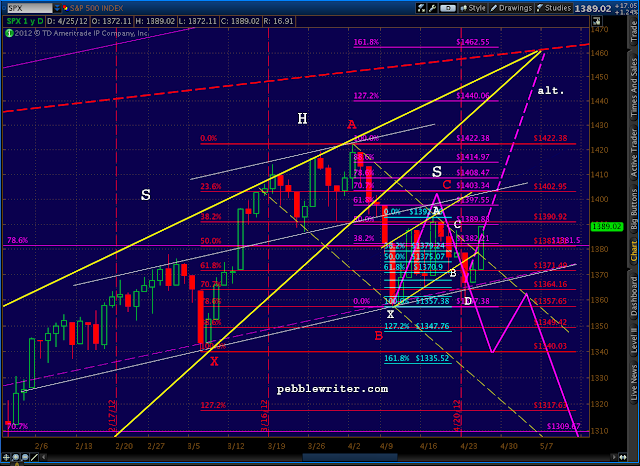 Looking at the daily RSI, we’re back testing a trend line (yellow, dashed) going all the way back to last August’s lows.  We broke it on the 9th — remember that 16-pt tumble out of the rising wedge?  I’m going to watch that TL like a hawk, as I believe it holds the key to which way this latest confusion resolves. 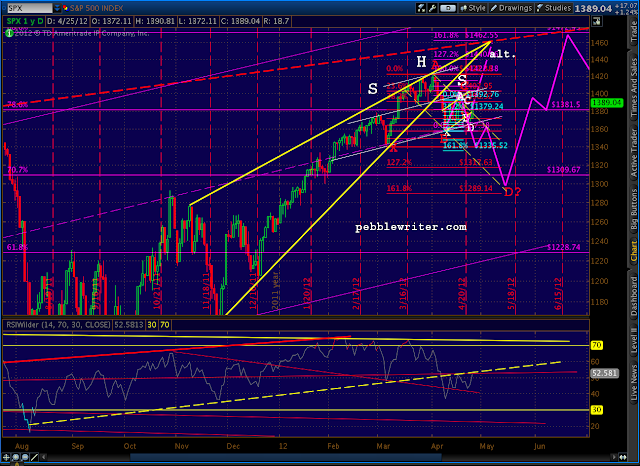 Bottom line, you can’t break down from an eight-month, 400-point rising wedge and not expect the bulls to put up a little fight.  That’s what back tests are all about.  It’s a case of the bulls not being ready to give up, and the bears not having enough conviction.

Just like confirmation of a H&S pattern has its levels of certainty, so does the bust of a H&S pattern.  One key indicator to watch is whether we exceed the previous shoulder — 1392.76 on the 17th.  So far we haven’t, reaching only 1390.81 this morning.

Remember, we had originally been looking for 1400 in order for the right shoulder to be proportional to the left.   We never did reach the parallel shoulder line, and so an A-B-C move to 1400-1408 would leave the pattern looking slightly better.

While no particular proportionality is required of H&S patterns, it is for analogs.  I’d be a little leery of the analog playing out if the right shoulder lasts too much longer.  By Tuesday of next week, the right shoulder — and the entire H&S pattern — will be roughly proportional to the 2011’s.  That means whatever bump this pattern has in store should run its course pretty quickly if the analog is going to hold.

Bernanke speaks at 2:15 EST.  I suspect most of the fireworks is done till at least then.