So far, SPX has obliged us by tagging every one of our targets.  The 1310 Fibonacci .707 retrace [see below] of the 2007-2009 collapse is our current intra-day low, and we’re presently sitting at the 1.272 target of the Butterfly incorporated into the analog I first posted on April 9 [see: New Analog I’m Watching.] 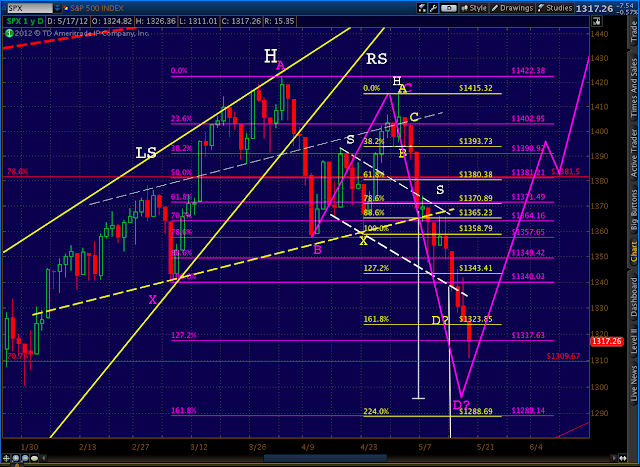 As I mentioned yesterday, I think there’s a very good chance we get down to 1289-1295 (depending on whether they can defend the very important 1292.)  As oversold as things are getting, I wouldn’t even think about going long except, perhaps, to play a bounce — unless we’re able to break out of the acceleration channel on the 60-min chart. 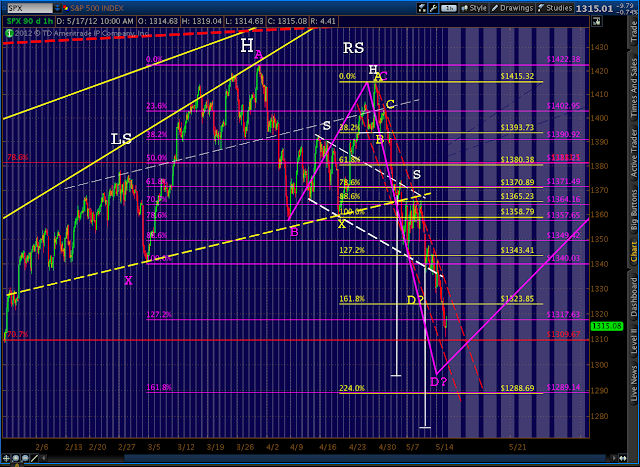 Philly Fed numbers aren’t pretty, with a 5.8% drop versus last month’s 8.5% increase.  Especially troublesome is the 6-month outlook, which has plunged from 33.8 to 15.0.

The Conference Board Leading Economic Index also missed, showing a 0.1% decline versus expectations of a 0.2% gain.  This is the first drop since last September.

If it looks like the leading economic indicator line hooked down over the past few months, that’s because it has.  Note the monthly rates of change — trending down from +0.7% in Feb to +0.3% in March and now -0.1% in April (not the sort of behavior you want to see in a recovering economy.)  Here’s the official explanation from the Conference Board:

I’m watching the RSI for clues as to which of our targets SPX will settle on.  Remember, the range is 1295-1323, though the number of unfolding events that could overwhelm our forecast is growing.

The daily chart shows several parallel trend lines that might provide the final stop.  But, of course, lower stock prices often occur on a higher low in RSI — a phenomenon known as positive divergence, and a sign of a potential bottom.

The purple dashed line (8) is associated with the declines in November of 2010 and a secondary dip in August 2011 and probably corresponds with either 1300 or 1317 on SPX.

The yellow dashed line (9) stopped the plunges in March and June in 2011, and provided the higher low for the actual August 2011 1101 bottom.  March 2011 is the analogous point in the analog we’re watching.

Surfing these RSI channel lines is an inexact science, because turns rarely occur exactly in line with previous highs/lows.  There’s a relatively high margin of error, say 5-8%.  So, it’s possible that yesterday’s RSI low could be considered to have tagged the white line.  If we get a strong rally off the Philly Fed survey or Conference Board numbers at 10am, we’ll call it that way.

Last, the 60-min RSI shows a pretty good possibility of a bounce in the 1317 range.  Between 1323 and 1317, 1317 belongs to the larger and more important pattern — the Butterfly.  So, unless the Philly Fed survey is atrocious, we should get some kind of bounce there.