We can’t call the corrective wave over just yet.  There’s still potential to one of those fibs or channels we discussed yesterday before the 3rd wave down gets going.

But, RSI is still showing no breakout potential on any time frame.

A 50 – 88.6% retracement is considered “normal” for 2nd waves.  This one had a little reversal at a little over .618 on the largest white scale, which opens up the possibility of a Gartley (which completes at the .786) or a Bat Pattern (completes at the .886.)

That would set up a Butterfly Pattern on the little red pattern which completes at its 1.272 at 1418.27 — intersecting nicely with the white pattern’s .786 at 1418.27.  Such a price point intersects with the channel lines (as drawn, but not yet firmly settled) at the end of the day or very early in tomorrow’s session.

If SPX can’t get past 1415.56, then the downside harmonics (represented by the small purple grid) are in play, and the initial target is back to the 1398 level (previous low, and a Bat Pattern .886.)  Once prices move past 1398, the decline should accelerate.

If the analog were to play out exactly as before, with no deviation from the past pattern, we’d not see any higher prices at all.  In fact, we’d be back below 1343 in the next day or so — starting this afternoon.  But, that’s a bit much to expect, given the big deviations we’ve already seen within each wave.

Lots of excitement around AAPL the past couple of days.   A couple of weeks ago, after AAPL soared 90 points in 7 sessions and was approaching 600, I was a little skeptical [see: AAPL update.]  I posted the chart below, and nervously took a stand.

Combining all the above, it’s easy to imagine a scenario where prices drop to 500 into the end of the year, but can’t quite seal the deal on the H&S pattern.  A nice bounce there and rally into February would fit nicely with my general equities forecast (see below.) 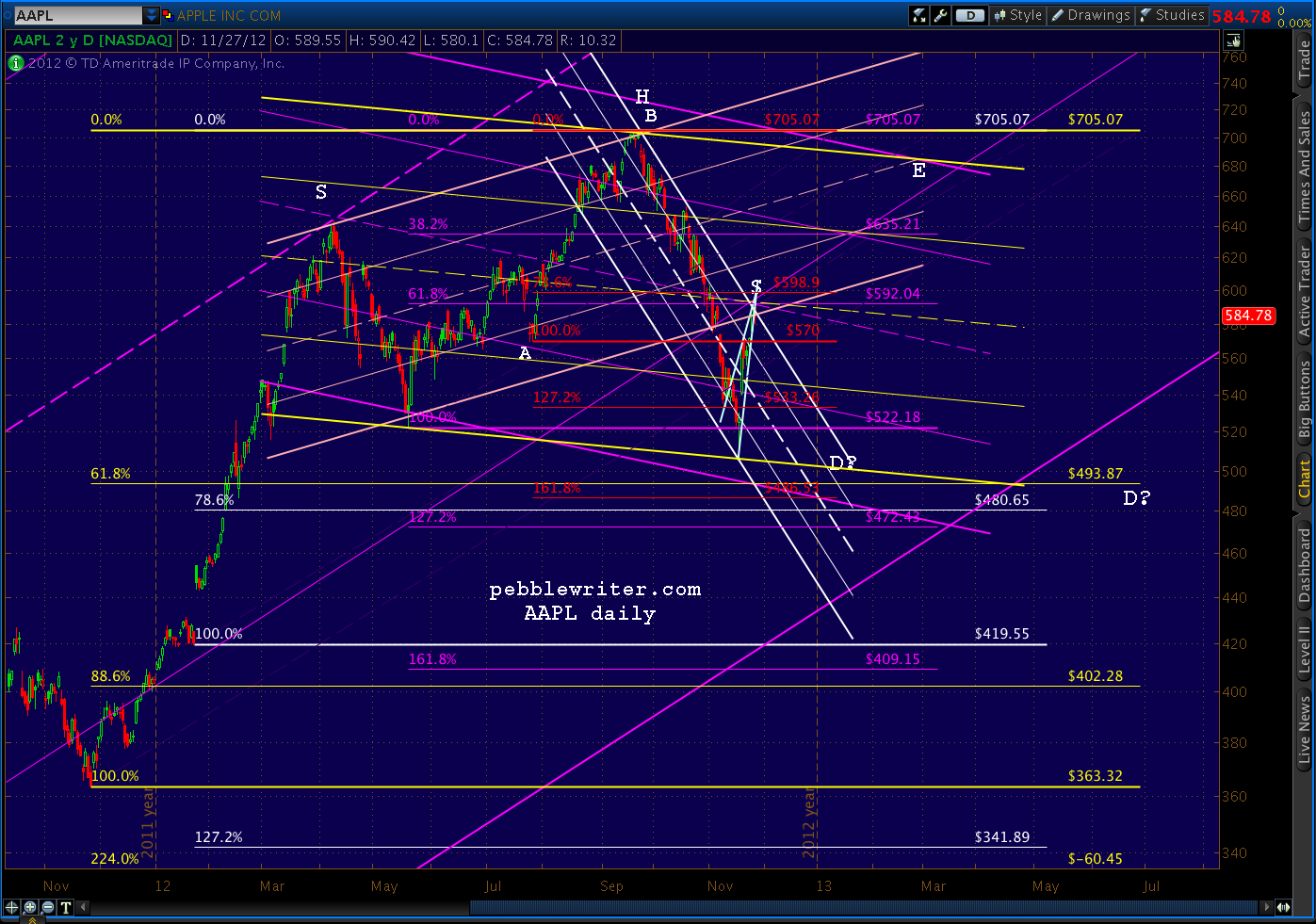 AAPL gained 4 more points over the next couple of sessions, then took a swan dive that has seen it lose nearly 75 points in less than a week.  Here’s the same chart, updated for the actual price action.

Aside from the fact that AAPL did what we expected, nothing’s really changed.  There’s a H&S pattern that would complete at about 504.  Given the number of hedgies and mutual funds rushing for the exits, who could be surprised if AAPL went ahead and completed it?

But, I’m not beating the table for that scenario, only because a bounce just shy of completing the pattern better fits with my general equity forecast.  AAPL came within 3 points of a .886 retracement of the bounce from 505 today (and 14 pts shy of the H&S completion) so there’s ample reason for a bounce.

It could easily stay in the little white channel, forming a falling wedge into the year end as the rest of the market melts down a bit.  Personally, I wouldn’t have anything to do with it in my portfolio unless it was an iron condor or the like.  The volatility is too great and I don’t like the odds in either direction.