I can picture it clearly:  It’s 1963 and 10-year old Benny Bernanke sits staring at the black & white Zenith in the living room of his East Jefferson Street house, captivated by the voice of Vic Perrin…

“There is nothing wrong with your television set.  Do not attempt to adjust the picture.  We are controlling transmission.  We will control the horizontal.  We will control the vertical.  We can change the focus to a soft blur, or sharpen it to crystal clarity.  For the next hour, sit quietly and we will control all that you see and hear. You are about to participate in a great adventure.  You are about to experience the awe and mystery which reaches from the inner mind to the outer limits.”

click on the image for a trip down memory lane

These were the formative years for the future leader of the financial world.  The idea that anyone could completely alter someone else’s reality must have captivated him then, as it clearly does now.

How else to explain the market’s rise after one of the world’s biggest banks admitted to [tip: think icebergs] a $2 billion trading loss on what they insisted was a matched book?

Now, $2 billion isn’t going to ruin JP Morgan Chase.  They have $1.2 trillion in assets and $112 billion in Tier 1 capital.  The ruinous aspect of this news is that they, as some of the smartest guys in the room, have lost control of their derivatives trading.

Needless to say, the Plunge Protection Team has been mobilized.  In yesterday’s conference call, Jamie Dimon as much as admits that the worst is yet to come:

“Net income in Corporate likely will be more volatile in future periods than it has been in the past.”

It’s as clear as the worry lines on Blythe Masters’ face that they have no idea how ugly this might get [read: much, much worse.]  And, if this guy — the Prince of Wall Street — has such tenuous control on the goings-on in his Chief Investment Office, what are we to think about the rest of his $78 trillion in derivatives?  How about the other $630 trillion held by other bankers? [see: City of Dreams] 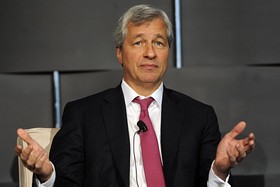 In one of Bernanke’s first televised post-fed meeting interviews, Dimon joined in the Q&A, bashing Bernanke for the litany of regulations and reforms that were preventing the financial community from recovering from the financial crisis.  Needless to say, there was no mention made of his leadership in creating the crisis.

This is analogous to bailing your kid out of jail, only to have him complain about how long the drive home is taking.  I was impressed by Bernanke’s restraint as he provided a thoughtful response, while no doubt thinking: “I saved your sorry ass, and this is how you repay me!?”

As the guy ostensibly at the controls, Bernanke must feel more than a little perturbed that things aren’t going according to plan.  I wonder if Vic Perrin’s words ran through his mind yesterday as listened to the JPM call.  I wonder, as he called Dimon to lay down the law (“no, really, I mean it this time — no more bailouts!”) whether he heard those familiar words from the other end of the line…

“There is nothing wrong with Wall Street.  Do not attempt to adjust the picture.  We are controlling transmission….”