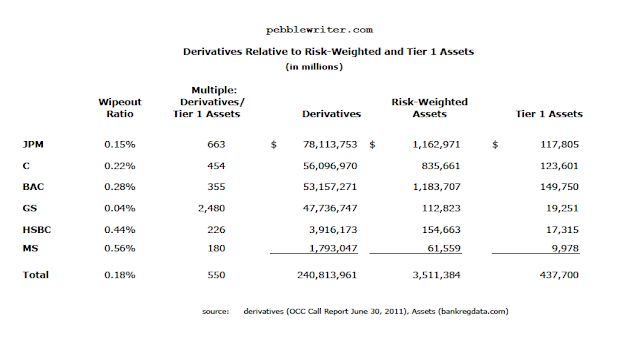 Overall, a 0.18% decline would do the entire bunch in.    Something to think about, especially as the vast majority of derivatives are OTC, are not priced in public markets, and are obscured/netted out in balance sheets.  Remember, “too big to fail” really means “subject to taxpayer bailout.”

A little over a week ago in a Zerohedge article we learned that Italy’s previously hidden derivatives exposure amounted to 11% of the country’s GDP.    A recent $3.4 billion payment to Morgan Stanley to settle a 1994 contract wiped out half the value of the tax hikes recently imposed on an already crumbling economy.

I fear this is the story of the year, folks.  And, it’s just now starting to get some press.  As we learned with AIG, if one segment of the financial markets suffers unanticipated losses, the entire house of cards can come crashing down.  Banks know how bad the situation is; how else to explain the lack of interbank lending — particularly in the euro zone?