Where did March go?  If you’re anything like me, it was a blur.  I was in the process of recovering from knee replacement surgery when the crash began [being under the influence of some very strong pain killers was probably the best way to weather the storm.]

On February 3, the day before I went under the knife, I pulled together a forecast on everything I chart: stocks, bonds, currency pairs, commodities, etc.  I try to update the Current Forecast page at least every month. But, between the pain and the global pandemic which threatened to trap my daughter in Rome, I was a little preoccupied.

I had been fairly bearish when penning that Feb 3 forecast and was still lucid enough in the following weeks to warn of the coming storm, writing on Feb 18 in When Will News Begin to Matter Again…

…be very careful in chasing this breakout. It is built on a very weak algo-driven foundation which, given the coming moves in CL, DXY, USDJPY and TNX, cannot stand. When it cracks, it could be quite violent.

…the major downside support levels such as the yellow 2.618 at 3047 – which was never backtested – and 2.24 at 2703 will soon disappear from the path of the existing rising channels… All I know is that when important support breaks down, it’s time to short – especially when the usual central bank tricks aren’t working.

As it turned out, Feb 20 was the all-time high. A month later, SPX had fallen further and faster than ever before. Needless to say, the targets mentioned in the forecast were reached and exceeded in almost every case – more than reversing the excesses of the breakout above SPX 3047. 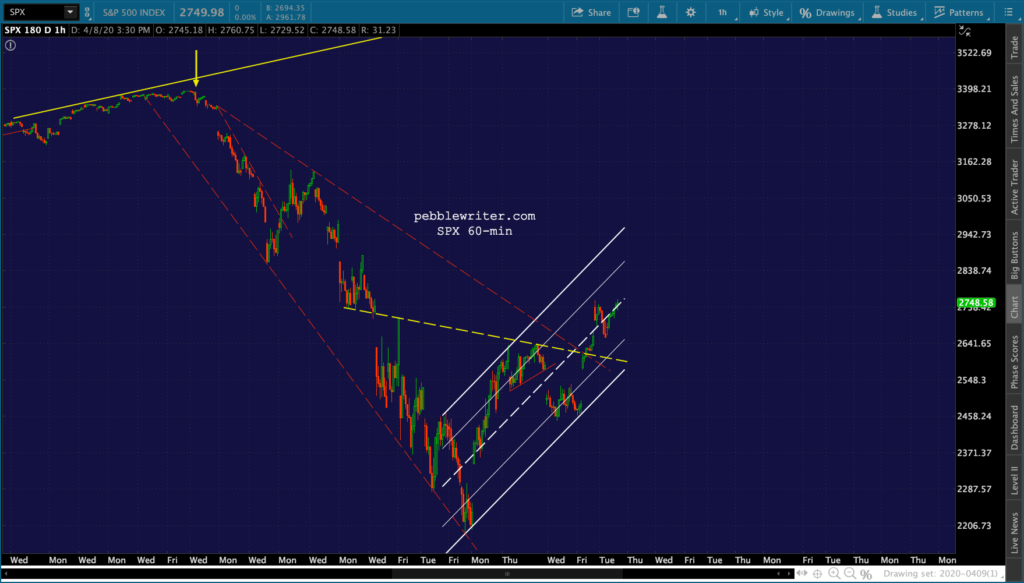 My favorite downside targets over the past six months have been ES 2155 and SPX 2138.  ES came close, dropping within 19 points of its target on Mar 23 before all hell broke loose.

The Fed began an extraordinary response which was expanded again by $2.3 trillion at 8:30:01 this morning.  Not coincidentally, it was announced seconds after jobless claims of 6.6 million (also not coincidentally, which tied the worst ever prior continuing claims number) were announced.

Futures responded as planned — taking us another step past the line where price discovery used to be. The Fed might as well have named it the Prop Up the Market Program, as it lends new import to the expression “don’t fight the Fed.”

Oh, and just in case the market doesn’t understand the Fed’s intentions, Jerome Powell will give another presser at 10AM. 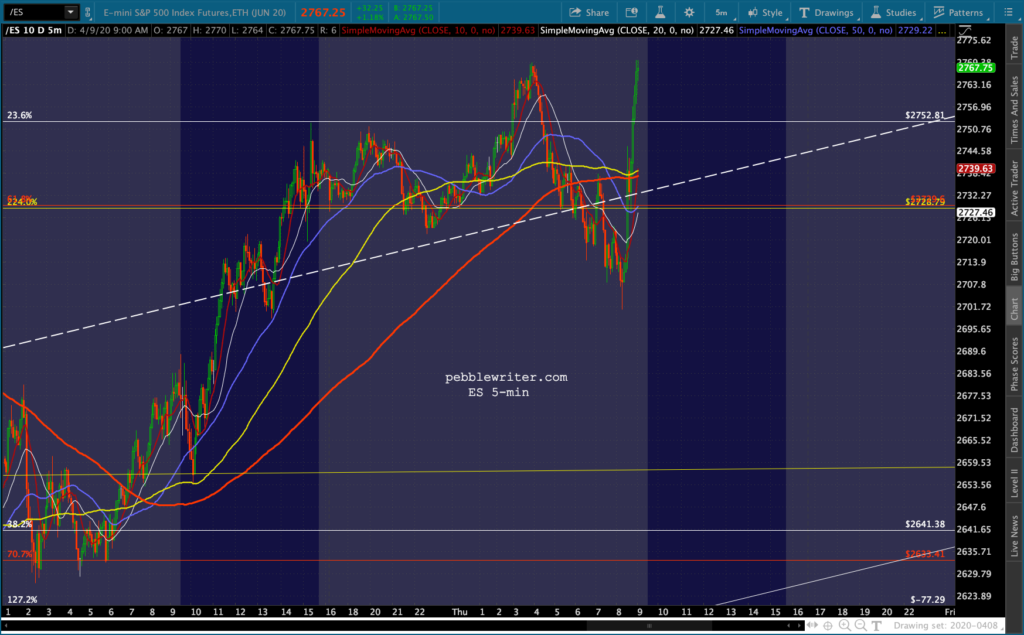 Just for fun, here’s a quick peek at where things stood on February 3…

Neutral DXY:  2/3/20 – We were long from 88.253 on Feb 16, 2018.  Came close enough to our 97.873 target on Nov 12 and again on Dec 14 where we shorted at 97.  Multiple breakdowns have bounced back, leaving DXY in trading range between 97-99 since Aug 2019. Essentially jerking algos around with signalling rises and dips. Don’t see it as a viable trading vehicle until at least March 2020, when inflation pressures should ease and make a decline possible.

Short EURUSD: 2/3/20 – Has been in a gently falling channel since July 2018, seems destined to remain in it for the foreseeable future. Recently backtested the latest rising corrective channel it broke down from. A nice drop to 1.0592 is possible, but the ECB is being careful to avoid big drops. Next downside target is 1.0813.

We’ll continue with a roundup of where we are two months later.

Already a member? Login below…