Despite all the drama, EUR still looking like the bottom’s about to fall out.  All the players are hedging, talking about needing a few more days past Sunday (the most recent deadline for the miracle cure.) 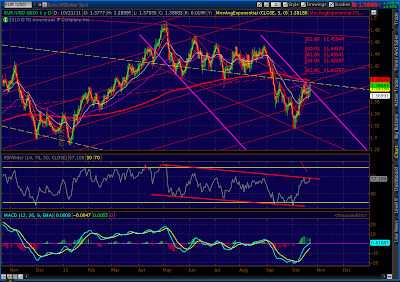 Note the RSI trendline, still within the channel we’ve been watching.  And, of course, we’re up against the 200 day moving average.

Well…that’s the thing about 50-50 shots.  They don’t work out half the time.  For newcomers to the site, this is why I recommend stops.  Even harmonic patterns, which are considered to be successful 70% of the time, will lose you money the other 30% of the time.

All successful traders set stops just beyond the expected move to cover those contingencies.   Because, regardless of what the tea leaves say, you never know when a Guardian article or MENA despot’s death is going to pop out of the woodwork.

Here’s what’s happened to DX.  The price action is obvious, but look closely at the RSI and the histogram.  The histogram, which had been forming a nice bottom, decided to put in a lower bar.  If it stands, this is a good indication that the channel is expanding. 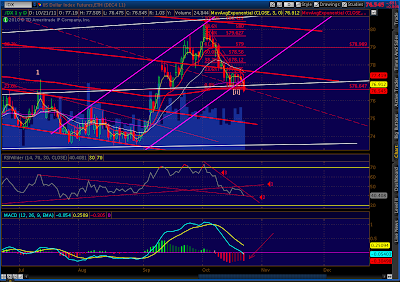 Likewise, the RSI, which had been following trend line 1 until recently,  appears to be more heavily influenced by 2 and 3 at the moment.   We frequently see aberrations which require a little finessing, but this one needs resolution on a grander scale.  By that, I mean look at 2 vs 3.  In a day or two, RSI will have to decide between staying below TL 3 of staying above TL 2.  It can’t do both. 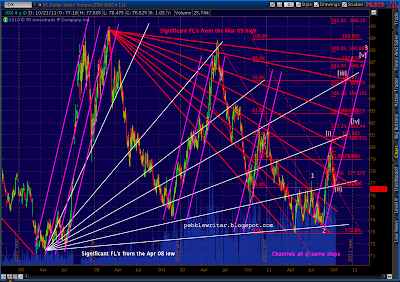 I’m inclined to leave the slope of the channel alone.  It’s been a very consistent guide to price action since Mar 08.  When prices have corrected out of the channel, they’ve resumed a few clicks to the right, in a wider channel or, to my eye, a parallel channel.    Here’s an example from Mar 2010. 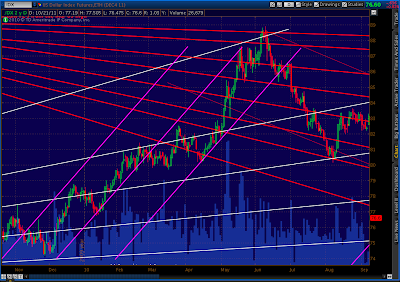 In every case, defection from the existing channel has been the result of intersecting with an important fan line.  I’ve drawn in the obvious ones from the Mar 09 top (equity markets bottom) in red.  The line that stopped the Sep 10, Jan 11 and early Sep 11 rallies was broken on 9/21.

But, it came back for a backtest and continued back below that fan line on 10/12, finding support instead on the white fan line from the Apr 08 bottom.   DX is backtesting that line, too, although from on top — meaning it has a bullish (for the dollar) potential.

The two fan lines are seen here as A and B.  So, think of it as A trying to keep the dollar down and B trying to keep it up.  In the background, the inclination for the index to follow the same slope that’s been in place for years in the form of the channel. 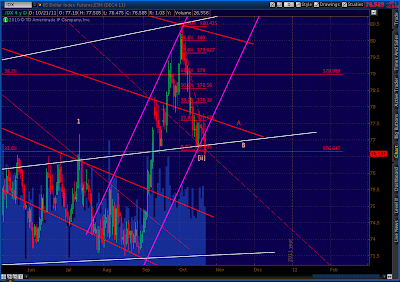 We could bounce around in the triangle formed by both lines through the end of the year, committing to neither.  It wouldn’t be surprising, given the chop we’ve seen in the equity markets for several months now.

It’s also entirely possible that today’s drop is just a momentary excursion from the channel — typically a couple of days, or even intra-day.  The same thing has happened on numerous previous occasions.   But, unless we get a vicious snap back of today’s decline, we’re looking at a widening of the channel.

With that said, I’d be remiss if I didn’t at least mention the third possibility: that the dollar has gone as far as it’s going to.  If the Euro weren’t circling the drain, I’d take that possibility seriously.  But, there seems to be little chance of a EUR miracle; every such report has been proven optimistic and/or just plain false (still, the press gobbles them up like so many Halloween treats.)

But, it’s worth remembering, we are in a counter-trend rally — albeit it a very large one.  Even if we make it all the way to my 87 price target, we would just have completed a channel that started back in 1998 or so.  The DX’s strength is a function of other currencies’ weakness (the least dirty shirt.)

It’s hard to say how long it will be able to retain safe haven status once markets everywhere are falling.  Some day in the not too distant future, EUR will be resolved for better or worse.  And, investors will turn their attention back to America’s sorry state of affairs. 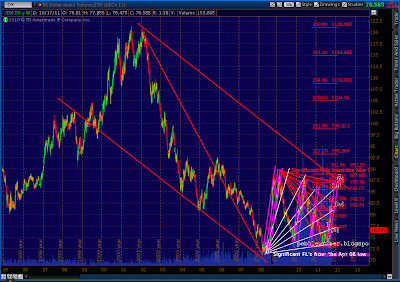 Just a quick post, as I’m traveling on business this week.  The futures 15-minute chart shows a definite topping pattern that’s a dead ringer for the pattern I found in most every major top for the past 80 years.  This one is on a much smaller scale, of course, but check out the details. 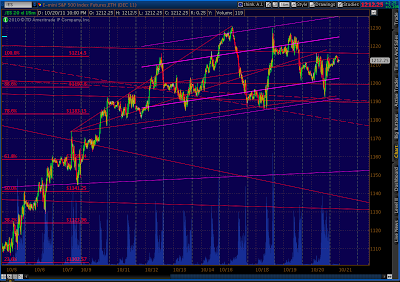 It works with both the fan line methodology and the 2-standard deviation regression channel [for background and derivation, see Update: Channel Surfing among others].  It finishes with a touch of the midline, just like 2007’s (the 2011 pattern finished at the 1-std dev line instead.)

It even forms a nice little head & shoulders pattern which, if it plays out, would be good for 45 points or so to, say, 1150.  We just happen to have a major fan line there which grazes several of the bottoms these past couple of months (purple dashed line below.) 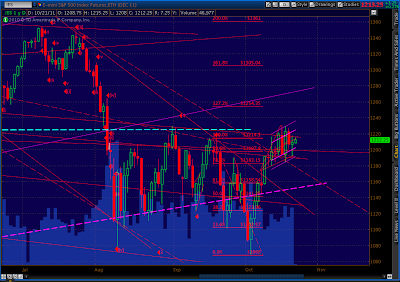 The only hitch I can see is that the pattern isn’t there on the cash index — only the futures.  In SPX, what would be the right shoulder is actually higher than the head.  Of course, that was the topping pattern formed by NDX, so it isn’t necessarily invalid — just not a perfect match.

I’d give this a 50-50 shot at playing out in the next trading day or two.  Like everything else these days, it’ll be at the mercy of the Euro Zone rumor mill.

Also noting the dollar is facing a decision — whether to stay in the channel or remain below the fan line it’s been testing this past week.  My vote is with the channel, meaning DX is ripe for a breakout.  I’ve been posting for a while now, so this is just icing on the cake. 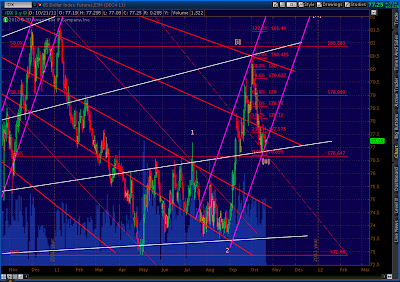 The 60-minute illustrates the two paths quite clearly. 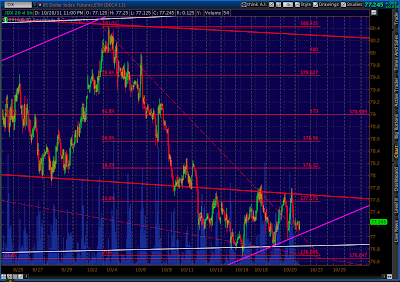