It’s probably safe to say the 2011 v 2007/8 analog is back in sync.  While there were numerous reasons to expect a lower low than the 1074 we got, in the end we got something truncated — whatever count you want to put on it.

I’m disappointed (and poorer), but am happy if things are back to a higher degree of predictability.  Here’s where the counts are as of today. 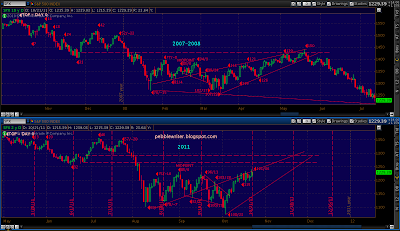 Assuming we get through the day without a sudden plunge, it appears as though one is coming as early as Monday (conveniently, right after OPEX.)   If I’m right, it’ll take us down to the 1140-1150 area and establish the lower ray of a rising wedge that peaks in December.

Here’s a closeup of the equivalent 2008 action, just for grins.  I’m working on the 2011 upside target.   My current thinking is around 1260, but I have more work to do before committing to that. 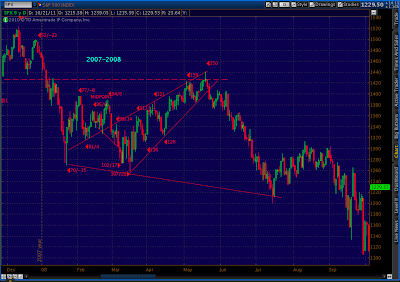 In the meantime, a very tradeable 60 point dip and likely 100 point rally into December.  Plenty here to help me get over the lost 40 points.

If I’m wrong, and we get the lower low I’ve been expecting, then it’s coming either really early or really late.  No question that this rally has been faster and stronger than most expected.  I heard that EWI is suggesting that the corrective wave is actually over – recommending leveraged short positions for the imminent wave 3 of 3.

Let’s discuss moving averages for a moment.  People are divided over whether to use simple versus exponential.  The EMA gives more weighting to recent price moves than older ones, so it reflects recent volatility more effectively.  On the other hand, that volatility sometimes generates false signals that wouldn’t have been made under the smoother SMA methodology.

Which should you use?  It’s kind of like the exponential vs arithmetic charting argument.  You should use both, if for no other reason than to be aware of what others might be watching (and acting upon.)  I bring it up today because SPX passed beyond the EMA 200 today (thick red line.) 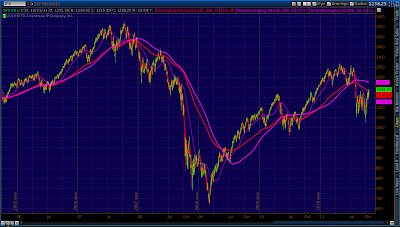 The thick purple line is the SMA 200, and is still a good 36 points away.   While both are some distance from their 50-day moving averages (and, thus, still in death cross mode) the EMA makes a really good case for a reversal right here.

Last, a note on currencies and moving averages.  DX just saw the SMA 50 cross above the 200, confirming a bullish market for the dollar.  Likewise, AUD and EUR both just saw a bearish cross on the 50/200 and their prices smack up against the 200.

While it’s possible we could see a continued stock rally in face of a rising dollar, that’s not how it’s been playing out lately.  It lends credence to the idea of a sharp pullback in stocks and rise in the dollar, followed by a period of chop that will carry DX back across the channel, possibly expanding it if completing wave 2 takes much longer.

A word about comments on this blog.  All I ask is that you provide an underlying rationale for your thoughts.  A statement such as “now we’re heading back to 1350” does very little to enlighten anyone.  Provide some context, so that others can decide for themselves whether your reasoning is sound.

I don’t even mind if your comment isn’t about technical analysis.  We can all learn from each other.   Although, if you get bullish every time the hummingbirds outside your window have sex, I suggest you start your own blog (and seek professional help.)

Also, for the first time ever, I deleted a troll’s discourteous comment today.  I have no issue with those who disagree with me.  Obviously, I won’t always be right.  But, we’ve had a great run, going back to my first post on May 2 (wondering if we were near the top — who would’ve thunk?)

I’ve given back some profits over the past couple of weeks, but am still up very substantially ytd.  Anyone who shorted heavily on July 26 [see: All Aboard] after seeing this chart has probably done all right, too. 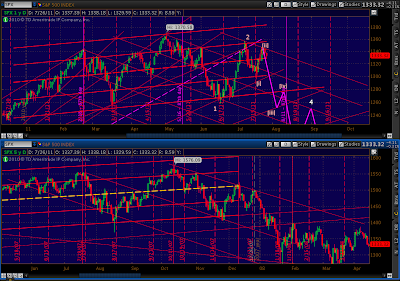 I’m often early, and have a definite bearish bias.  But, I try to always have a sound reason for my forecasts.  I always tell the truth as I see it, and don’t charge a dime for my thoughts.  Having said that, this is not investment advice.  Anyone who shadows my trading does so at their own considerable risk.