President Trump says he wants the country “opened up and just raring to go by Easter” — about 2 1/2 weeks from now.  Some business leaders and titans of finance are publicly agreeing.

Hopefully, this is nothing more than the latest ploy to goose the markets higher. The alternative is that he really plans on doing it, which would subject the country to scores of additional, needless deaths.

And, it’s not only the elderly or those with serious underlying conditions. Read this account of a 26-year old currently in the hospital or this one by a woman taking care of her critically ill 56-year old previously healthy husband.  Think of the people you know who are immuno-compromised due to heart disease, lupus, cancer or diabetes. Imagine being pregnant, facing the prospect of delivering in a hospital already swamped by COVID-19 patients.

We have seen so many government missteps over the past several months. But, this would be one of the worst. Even leaving parts of the country not under lockdown has been a colossal mistake, as those with the means simply leave the locked-down hot zones and head for those areas less affected.

We saw this in Italy, when the northern part of the country was shuttered. Within a matter of days, many people made their way to Southern Italy, Switzerland, France, etc.  The same thing has happened and will continue to happen in the US. Locking down New York was smart, but many had already headed to states not locked down – seeding spikes in cases in those states as well.

The number of cases in the US is increasing sharply. But, since test kits are still widely unavailable, that number continues to be meaningless. Look, instead at deaths – which increased 41% between Mar 23 and Mar 24 and have averaged a 30.2% daily growth rate over the past 10 days. 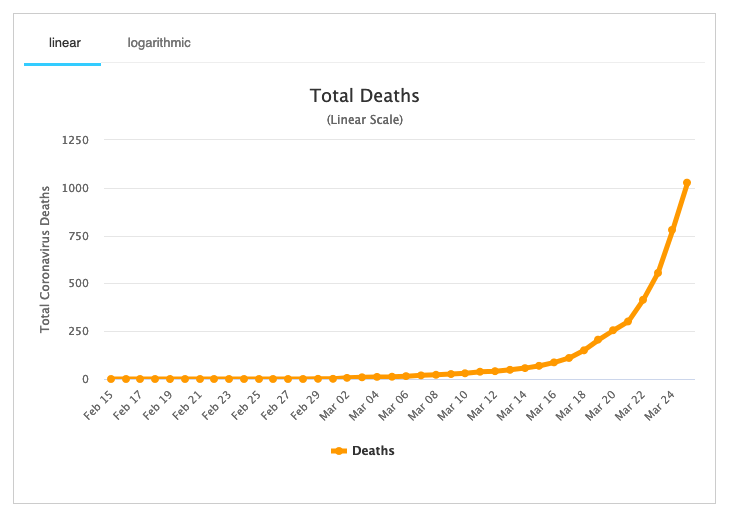 This is not about politics. This is about human lives. It’s time for our leaders to start recognizing it as such and make responsible decisions. A week ago, the President said, “Nobody knew there would be a pandemic or epidemic of this proportion.” He has made countless such comments that are equally ridiculous.

I’m a guy doing his own research, with no medical training or insider knowledge, and I started writing about this months ago. By simply paying attention to publicly available data, I knew enough to sound the alarm on Feb 24….

Even though the US has relatively few cases, it’s only a matter of time before the coronavirus affects every single person in the US. My projections indicate we’ll see over 500 deaths within the next month. How many businesses will remain open?

…even as President Trump was actively playing down the threat – seemingly prioritizing market gains.

Why are we just now ramping up PPE and ventilator manufacturing and imposing lockdowns – a neat euphemism for quarantines?  What could possibly justify the delay? How many must die before our elected officials take this seriously?

Futures have been all over the map following yesterday’s algo-driven short-covering extravaganza. But, the initial objective was achieved: SPX and ES both broke above the trend line in place since the February highs. 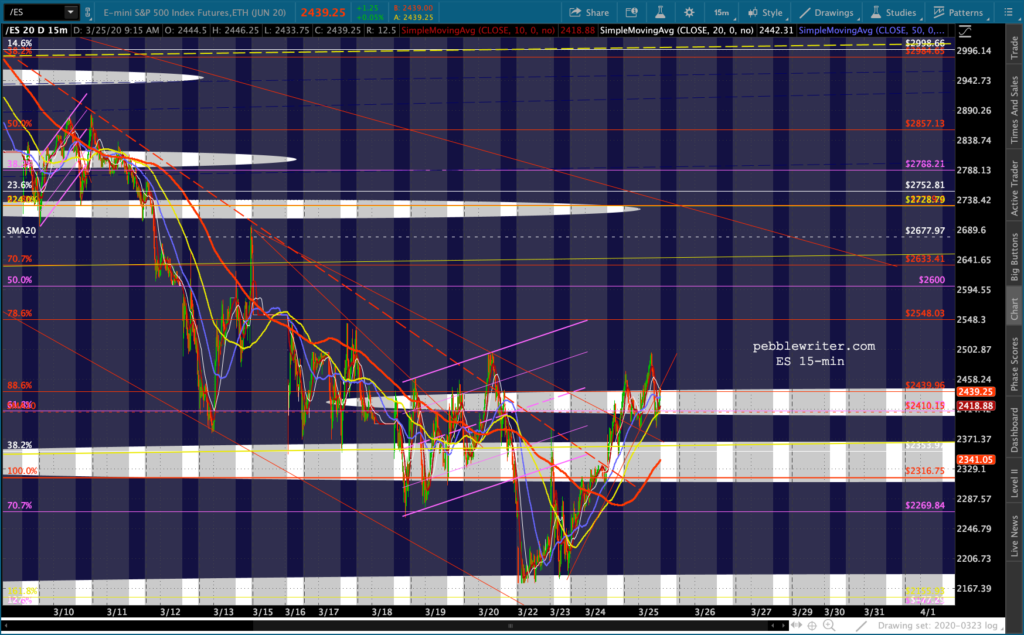 As has been the case after each of these Tuesday spikes, the big question is whether the gains can hold.