Back on Feb 1, I made a case for 465 as an interim top for AAPL and SPX topping at 1333 [see: Butterflies and Crabapples].  AAPL obliged me by tagging my target on Feb 6, then — probably to spite me — tacked on another 28 points, closing at 493.42 Friday.  During that same time, SPX has tacked on another 1.6% which, compared to AAPL’s 6%, strikes me as a little “divergency”.

Now, inches away from the psychologically important $500/share, is it time to throw in the towel?  Jumping in front of a runaway freight train like AAPL is always a little dicey, but a very precise tag of a 17-year old trend line — part of an obvious rising wedge — makes a good argument for an imminent reversal. 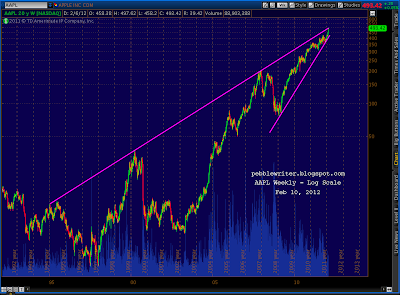 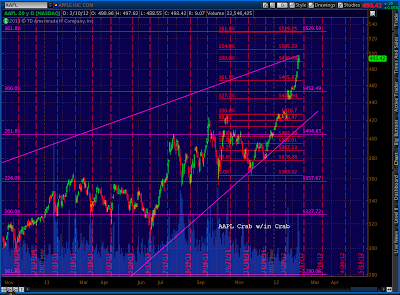 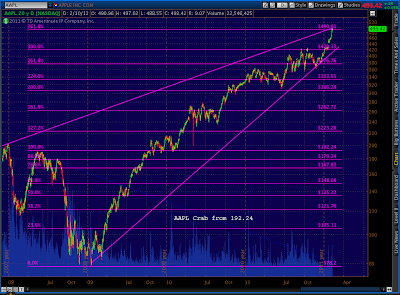 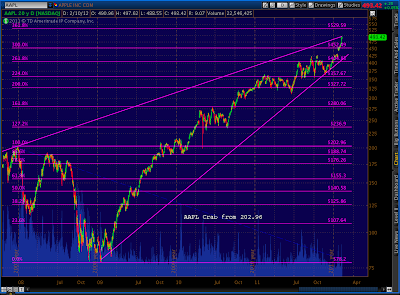 So, we’re seemingly stuck with ignoring a coincidence (529.59 v 529.25) or ignoring a very precise tag of a 17 year-old trend line.  Ugh.  It’s a little like the SPX and NDX, with ample reason for a reversal right here, right now — but a decent argument for a little bit higher.

Last time we saw this strong a bearish rising wedge pattern on AAPL was in 2000.  Check out the rising wedge and its aftermath — an 88.6% retracement. 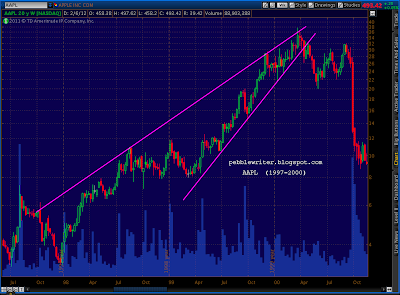 In 2000, AAPL had also just completed a Crab pattern — at its 3.618 extension (see below.)   It came with head fakes at the 1.618, 2.24 and 2.618 extensions, so it’s not much help in deciphering our current plight.  But, that thin red diagonal trend line is the exact same line as the purple TL on the weekly chart up above.   I have a pretty good feeling about that line… 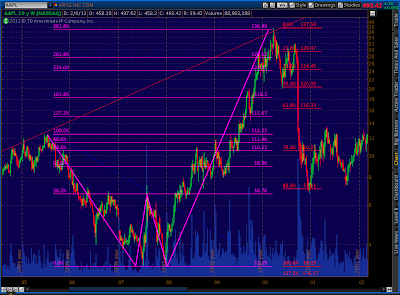 If it holds, AAPL should reverse very soon — maybe even Monday.  If it breaks, AAPL could tack on another 7.3% to 529 before cratering.   And, if AAPL craters in any meaningful way, there goes the neighborhood.   Either way, long term holders of this remarkable stock would do well to hedge their downside.