In the 12:15 post earlier, I discussed the two possible harmonic paths for EURUSD.  The path higher has been all but eliminated thanks to a dip below the presumed Point A. 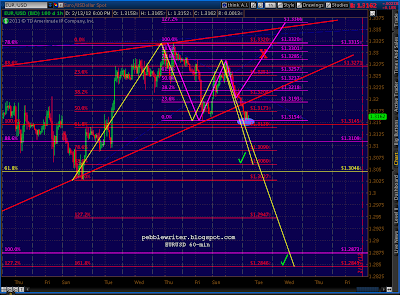 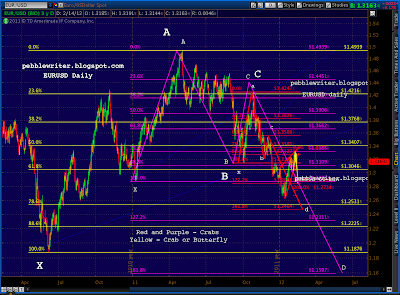 Here’s a medium close up of the jumbled mess surrounding today’s action: 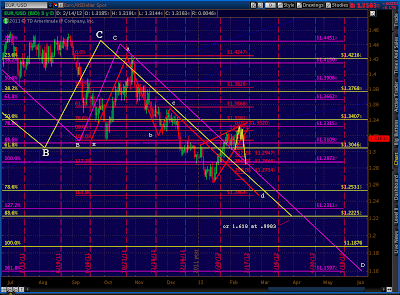 We’re on the brink of either a break-out or break-down, with the market refusing to show its cards.  The 5-min chart perfectly illustrates: 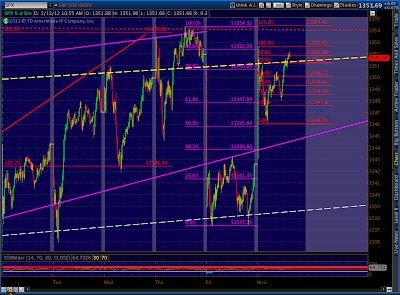 The purple Bat pattern reversed this morning at its .886, as it should.   Since then, it’s traced out a smaller (red) Bat pattern that’s stalled at its .886 — which is right back to where the first pattern’s .886 was!

If we can hold here, it’s a 1-2-1-2 with the next move down sharply.  Otherwise, there’s a pretty obvious 5 waves up being traced out, starting at Friday’s 1337 low.  Since we’re so close to the presumed top of 1354.32, it’s a pretty simple matter to set stops for those inclined to take a bearish position.

Likewise, anyone playing the upside breakout would do well to set stops around 1346ish.

Euro rally still muted, with the daily charts pointing to a decline… 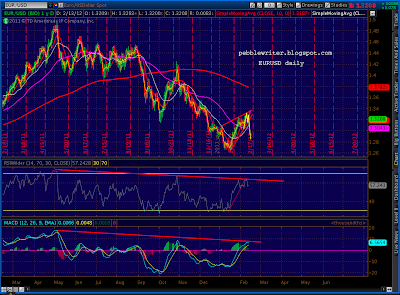 …though, in the short run, a slightly higher alternative is a possibility.  Since Gartley’s complete at a .786 Fib retracement, I’m always on the lookout for that Point D to become a Point B in a larger Butterfly pattern (purple). 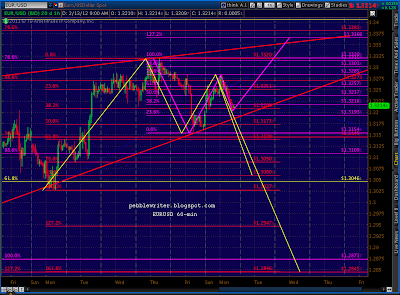 VIX is back testing its recent break out of a falling wedge. 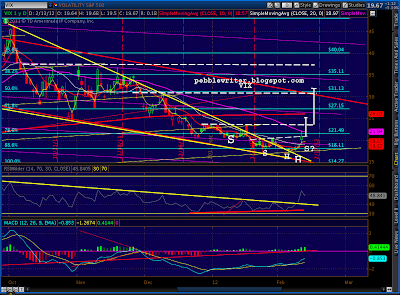 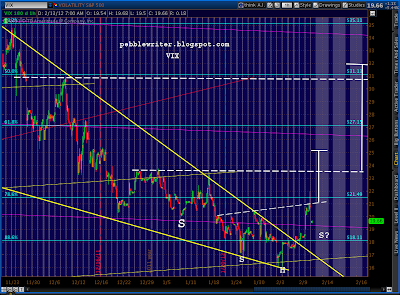 I believe this is my first ever copper chart.  If, as many believe, it’s a valid indicator for the stock market, the implications are bearish. 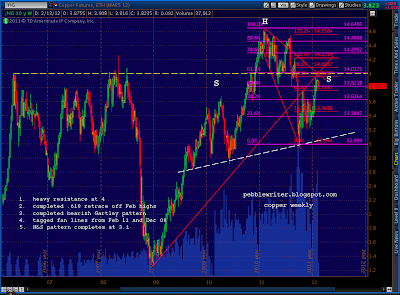 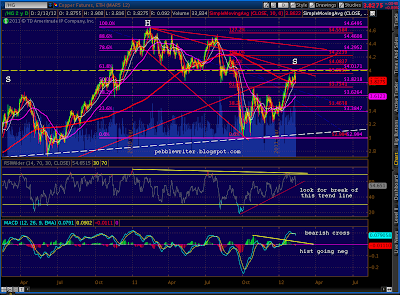 The 1354.32 high is still intact, as SPX slightly exceeded our .886 target of 1352.39 at 1352.63.  If all we get is this bearish Bat pattern inside the recently completed bearish Crab pattern, we should see downside momentum pick up throughout the day. 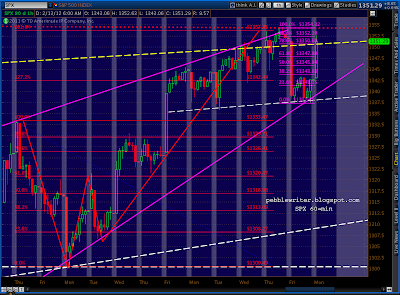 Since the Greek parliament voted to throw their citizenry (almost goofed and called them constituents!) under the bus yesterday afternoon, the euro has rallied predictably.  But, what an incredibly anemic rally… from Friday’s close at 1.3195 to a high of 1.3283 overnight to complete a bearish Gartley pattern on the 60-min chart.  This represents a 78.6% retrace of the recent high. EURUSD is currently trading at 1.3273, up 0.3%. 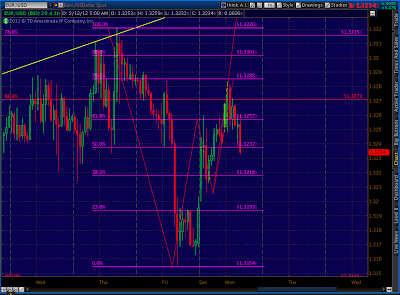 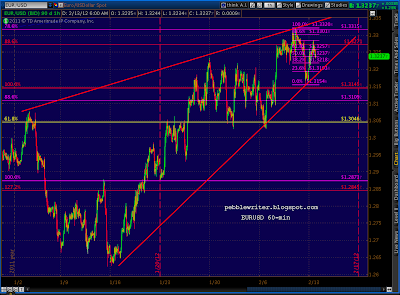 This, in itself, has to be pretty underwhelming for the bullish case.  The AUDUSD saw a similarly apathetic response — currently up 0.66% to 1.0746 after reaching 1.0777 overnight.  Given that it just broke down from a rising wedge, this .618 retrace smacks of a backtest — as in “the last thing you see before a rising wedge produces a decent decline.” 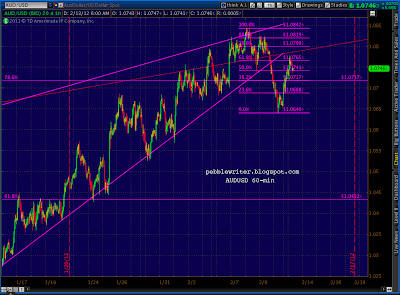 All this would be interesting enough, but look at what’s happening to the eminis.  They reached 1352.25 last night — a mere .50 from making a new high.  If the the euro itself can’t manage at least a 1% rally and 88.6% retrace, why the heck did US stocks go hog wild with a 97% retracement? 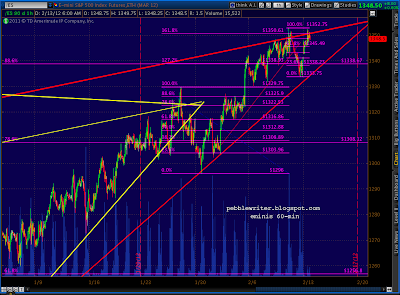 I’m glad I asked. Among its failings, the ECB hasn’t quite mastered the art of turning a sow’s ear into a silk purse.  Perhaps Madison Avenue is too far away, I don’t know.  But, TPTB here in the good ol’ US of A are very adept at turning any event with even a hint of eau de taureau into a full blown, quantitavish second coming.

BTW, that larger rising wedge you see is the absolute end of the road for wave 2 without a breakout or breakdown.  The key will be whether 1354.32 can hold this morning.  The ideal turning point would be 1352.39, to complete a bearish Bat pattern on the 60-min chart and set up the H&S pattern we discussed last week.