I’ve redrawn the channel to include today’s market action.  The existing line (w/ shadows) would have accommodated yesterday’s rise, but not today’s.  Channels can and do shift all the time, but this one caught me off guard. 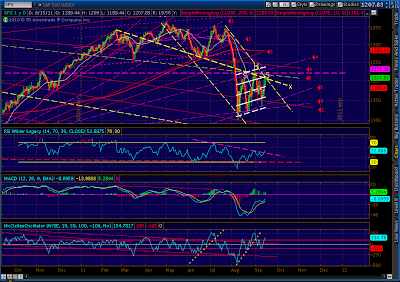 I believe the MCO indicator I discussed last night is still in play. The indicator has risen above +100, which is typically a reversal signal.

Also, a fan line that didn’t even earn a label the last time I drew these appears to have come to the bears’ rescue.  I’ll label it X for now. 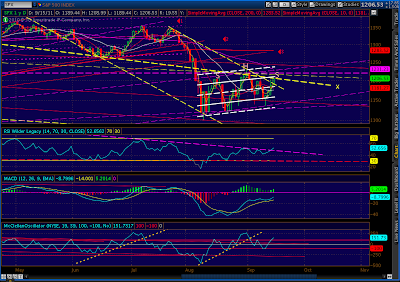 I’m distressed (and poorer) at having called the top a few days early.  This same thing happened at the end of the Feb – July topping pattern.  On Jun 24, when seemingly everyone was calling for a flash crash, I called for a rally from 1267 to 1330 within the next 5 trading days.  It happened in 4.  I happily took my short position, only to see the market rally another 40 points before peaking.

In that case, too, the market rallied to the +1 regression channel line instead of the midline as I had been expecting (based on the 2007 analog.)  We are within a point or two of the midline right now.

If you’ve read my stuff for very long, you know that I’m usually early.  I’m not sure why.  But, I’ll spend this weekend thinking about the comparisons between this miss and the one from July 7.

Last, DX is only .17 from its 200-day moving average.  The .382 Fib level is only .19 below that.  I see absolutely no possibility that we won’t get a huge bounce off one of those important support levels. 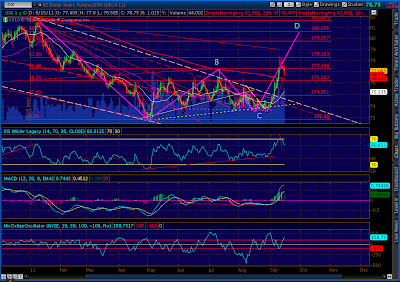 In closing, we are going down.  OPEX (actually, quad-witching) might delay things a day or two.  But it will be soon, and it will make your head spin.

Apparently, the channel I’ve been expecting to hold this advance wasn’t up to the task.  I’m nominating a different candidate (the purple dashed line instead of the yellow.) 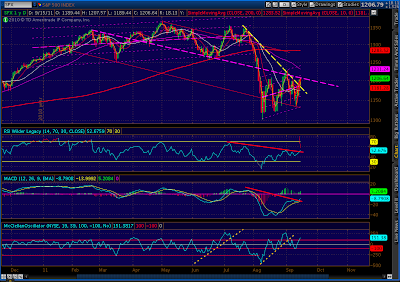 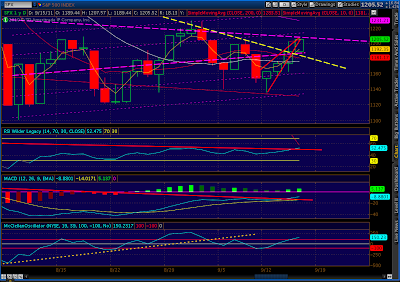 Compare it to the lines I drew on last night’s post for COMP. 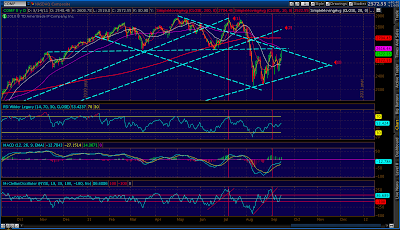 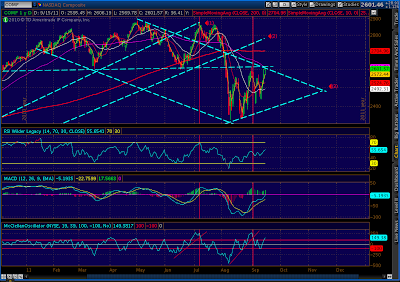