I’ve seen some huge manipulations of economic data before, but the July factory orders numbers from Census take the cake.

Because, through the magical seasonal adjustment process, it was reported as a $446 to $453 billion increase.  The durable goods component fell from $213B to $186B, but was seasonally adjusted to a $197B to $202B increase. 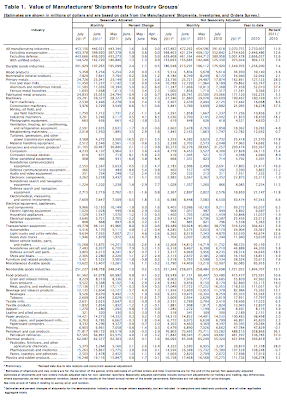 The rest of the report is filled with stuff that has manufacturers shaking in their boots, but you’ll never see it reported as such.  That would be negative and might scare investors who, apparently, can’t be trusted with the truth.

Quick note on the ADP numbers, which are always amusing and seldom accurate.  The 91K (versus 100K expected) doesn’t include the striking Verizon workers.  So, the real headline should be 46K versus 100K.  A bit more of a shortfall, no?

Likewise, the Challenger Gray job cut numbers were reported as a sharp drop in layoffs.  The reality is that YTD job cuts are at 363K versus 2010’s 335K.   The 2011 v 2010 monthly comparisons continue to look bleak.

And, finally, the ISM Business Barometer out of Chicago hit a 21-month low. 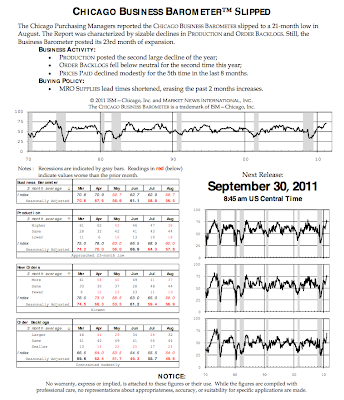 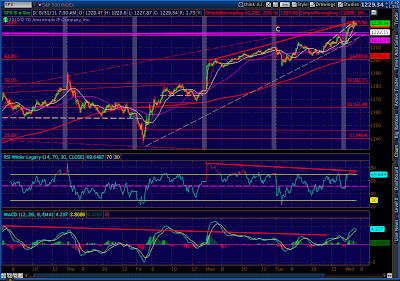 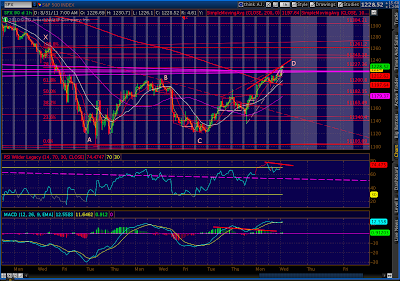 I’m always a bit skeptical when a Gartley point X isn’t at a clear pattern high or low.  In this case, it’s a distinctive point from Aug 3, but was clearly part of a continuing downturn that was larger in scale.

I might have been tempted to ignore it all together, except for this bearish Gartley on AAPL, the point X of which is at AAPL’s all-time high. 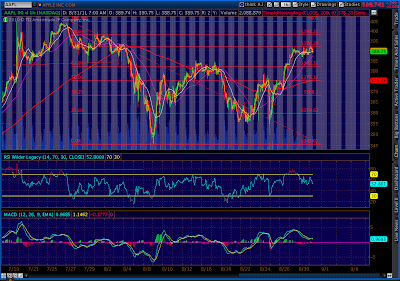 And, this, COMP at a major backtest of its neckline. 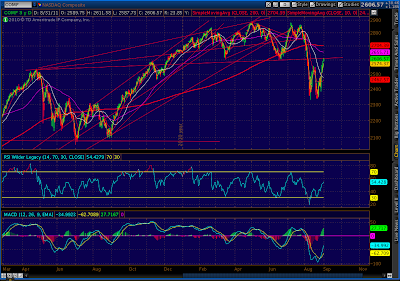 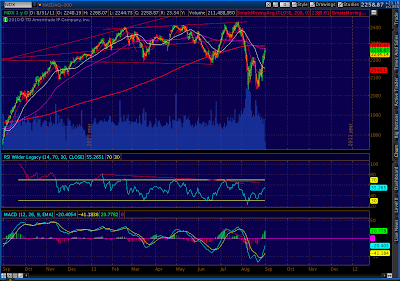 There are other indicators, but you probably get my point.  We’re at an inflection point here, where there’s plenty of reason to be cautious regarding the upside.

If we close above Fan Line B, I’ll be very surprised.  I won’t be surprised if we put in an interim high at 1230.

I redrew Fan Line B to eliminate the shadow from March 16th.   It’s still hanging in there as the limit of this latest move up.

As noted yesterday, it intersects right here with not only yesterday’s high, but Fan Line #4 (from Jul 09 via Aug 10) as well.

It also intersects with Fan Line G from the Apr and Nov 10 highs and a very important Trend Line from  the Feb 18 highs that also marked the Apr 18 and Jun 16 lows.  They’re all marked here as purple lines. 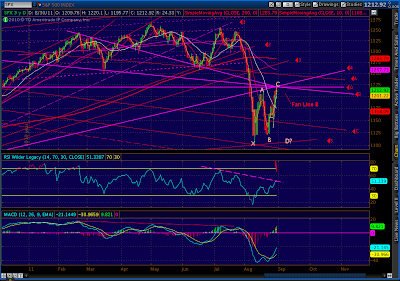 For FL B to hold, we’re going to have to reverse tonight’s futures rally.  My gut is that something in this morning’s economic reporting — PMI, Factory Orders or Employment — will start us off in the right direction.