The more I look at Fan Line B, the more I like it as the upward limit here. 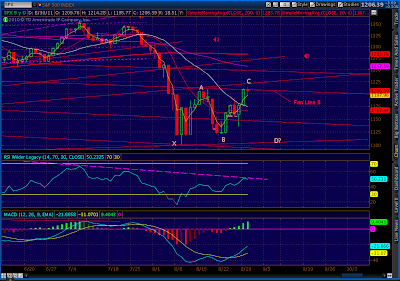 I’m having second thoughts about 2011 having slowed relative to 2008.  I’m looking at the alternative — that we’ve sped up again on a relative basis — and am growing more comfortable with it.

I might just have to get over the fact that we had hardly any blips on the way down to the 1101 bottom.  But, I’m not ready to abandon a 5th wave down just yet.  To do so means the 22nd’s 1121 low was a truncated 5th, and I’m just not buying that. 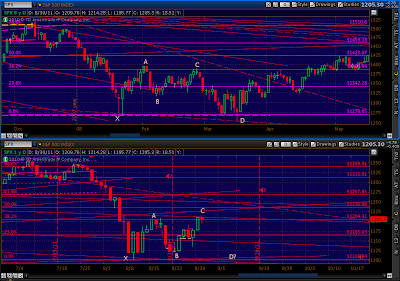 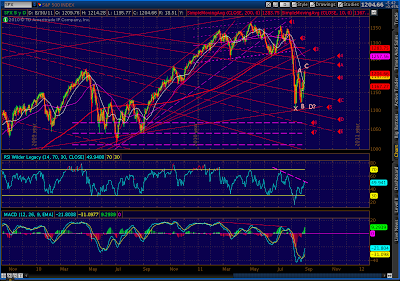 It gives me a little more confidence that we have a rising wedge and obvious divergence, seen here on the 15-minute chart. 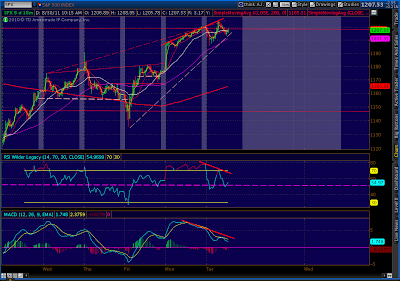 There’s plenty of important economic news coming out in the next few days — the perfect catalyst for the next leg down. 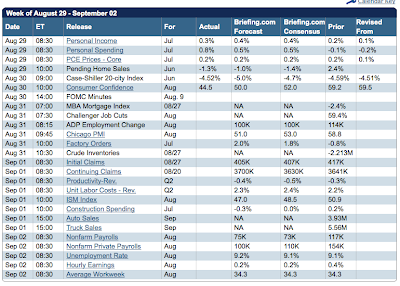 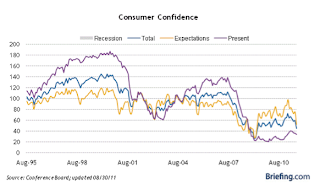 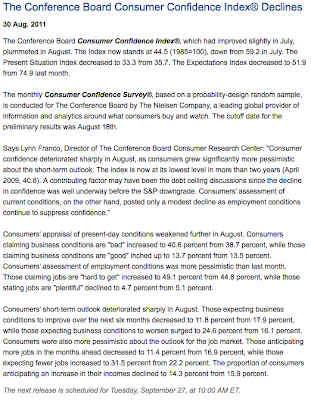 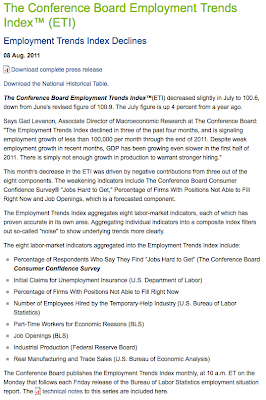 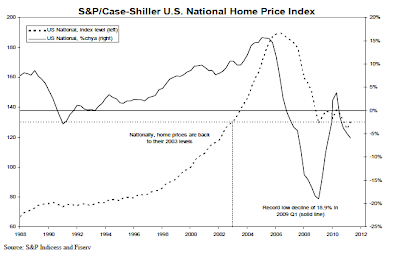 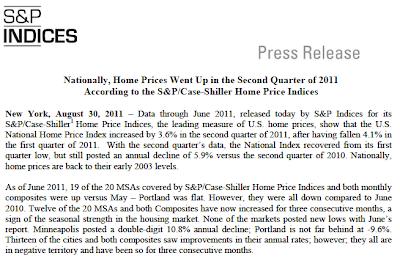 And, from the folks who would have reported Lincoln’s assassination as “Excellent Play Enjoyed by Nearly Everyone”… 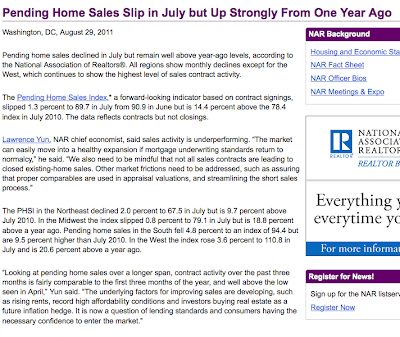 Don’t forget the growing contract cancellation problem.  Yun refers to it here rather obliquely, but this will be a larger issue going forward given the plunge in consumer confidence we’re watching.

Yesterday’s rally, the 6th in 7 days as talk radio crowed all day, was either the result of (depending on whom you believe):

(1) an increase in consumer spending;
(2) relief that New York was spared; or,
(3) Bernanke’s “many options” to stimulate the economy.

I’ll leave NY alone; readers will no doubt have their own ideas about whether it being spared was a good thing.  The increase in spending was accompanied by a decrease in income and increase in debt — definitely not a good thing.

Bernanke’s speech was hardly encouraging.  If people believe he has the ability to save the economy, then he’s won half the battle.  In fact, it’s so much better than actually instituting QEn and having investors discover that it won’t stop the next slide.

Okay, quick thoughts on patterns.  The H&S is kaput.  Ditto the bullish Butterfly and the triangle.  What we’re left with is a bearish potential harmonic pattern and a few interesting fan lines.  BTW, Fan Line B finally stopped yesterdays’s rally, as it did on Aug 5, 15 and 17. 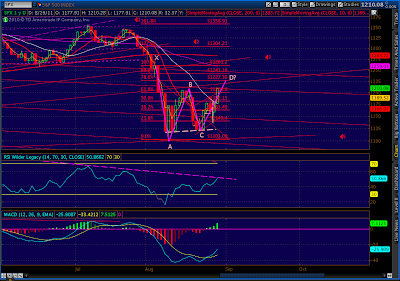 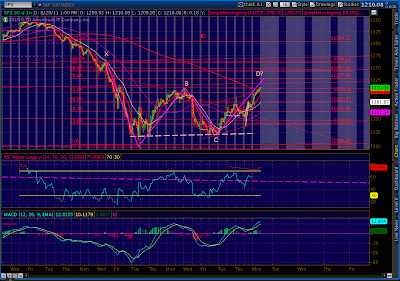 Note that the C point is at a .786 retracement of AB.  The question is where’s our point X, which would determine how great the AB retracement is?  The most interesting point to me is the August 3-4 high around 1261.20.

It puts point B at a .618 and makes the pattern into a potential Gartley.  Point D’s on Gartleys are typically at the .786 retrace, which here would be 1227.  The .886 would be at 1243.  The next moving average to the upside is the 50 day at 1259 — further confirming that as the highest possible target in this pattern.

These points also happen to coincide with a couple of interesting fan lines, so they bear close watching.  I already mentioned Fan Line B, which was the terminus of Monday’s rally. 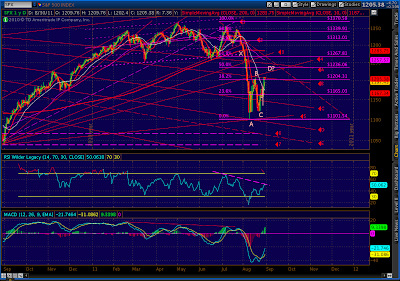 Other fan lines to watch on the upside are Fan Line #4, at 1220 and Fan Line A, at 1249.  Line #4 is also the level of horizontal resistance from the fractally similar pattern last November.  Fan Line A is potentially very important as it’s the same fan line that stopped this past June’s slide, and also marks the low from the Mar 16 plunge.

It’s also worth noting we’ve retraced to approximately the .382 level off the May 1370 highs.  While it wouldn’t be very satisfying from a harmonic standpoint, there’s a small possibility that the Fibonacci level of .382 and Fan Line B are enough to stop this rally here.  After all, it was Fan Line B that stopped the afore-mentioned Mar 16 plunge.