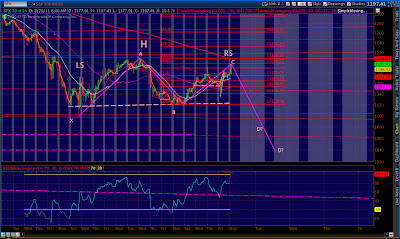 Real Disposable Income down, spending and inflation up.  Not a good recipe for growth, unless you’re talking about credit cards and car loans. 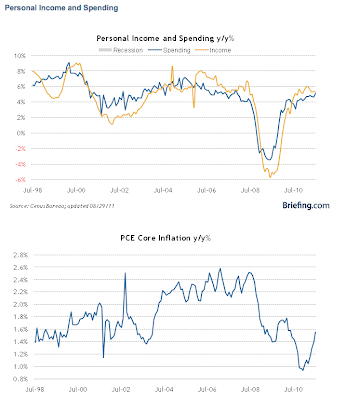 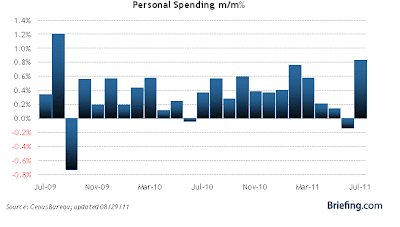 We’re expecting personal income, spending and prices at 8:30 EST.  Shouldn’t be any surprises, as this data has been largely been covered in other reports this past week.

Also, note that Point A marks the top of the head of our H&S pattern, and Point C marks the right shoulder.  The H&S target is 1040, essentially the same as the Butterfly target at the 1.618 extension.  Gotta love coincidences.

Just a quick note…the discrepancies between the two tops have all come at times like this — when there was a great deal of confusion and dissension, especially in the bear camp.

I will be traveling Monday – Wednesday, so intra-day posts will be spotty at best.  Good luck to all.

This is a very confusing time, with many of the indicators I watch slowly turning bullish — but with a total lack of uniformity,  on very low volume and in the face of awful economic news.   I attribute the failure of the market to turn down to the highly anticipated Jackson Hole affair.  Investors have been hyper-focused on the prospect of another round of QE.

Bottom line, I think the 2007/8 vs 2011 comparison is still in play, but with the current period “slowed down” by this distraction.  It’s happened several times before.  The idea probably sounds a bit odd, but I noticed months ago that the biggest difference between this and the 2007/8 market was the speed at which the topping pattern unfolded.

In February, this market was completing the topping pattern at a faster pace than did the 2007/8 market.  By May, the speed had caught up.  By June, it was running a little slower; and, if I’m correct, it’s continued to slow relative to back then.  Consider some move comparisons:

Here’s a picture of the late June 2011 divergence.   The market had bottomed just like in 2007 and was headed back up.  But rather than a 10-day rally to an interim high, we had a significant hiccup after 4 days when the administration foolishly tampered with the strategic petroleum reserve. 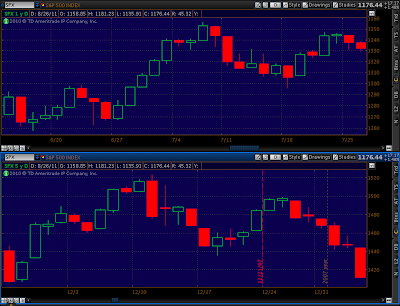 The market tumbled back to its lows and had to restart the rally.  It eventually reached its comparable target, but took an additional several days.

I believe the timing divergence is at play again.  Instead of oil manipulations, the prospect of Bernanke letting loose another round of QE simply stalled the current market.

As of Friday, we were running 4 days “behind” the 2007 equivalent.  This gave a number of chartists (myself included) pause.  It seemed as though bears didn’t have the cajones to finish the job it started, and bullish sentiment (and price action) has started creeping back in. 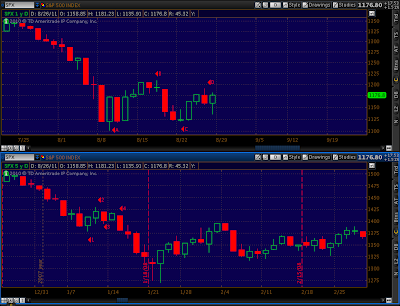 A number of bears are calling the 8/22 low of 1121 a truncated 5th wave.   I’m no Elliott Wave expert, but I find this explanation dissatisfying.  Such a powerful 3rd wave should have more follow-through than this wimpy little triangle-looking action.

Consider the 2008 equivalent.  There’s a very obvious triangle-looking a-b-c thingy (told you I wasn’t an EW expert) in the 4th wave position from 1/9 – 1/15/2008 that corresponds nicely to the triangle we’re currently tracing out.  I consider it a pennant, and these are usually continuation patterns. 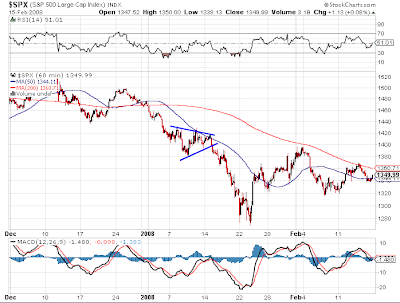 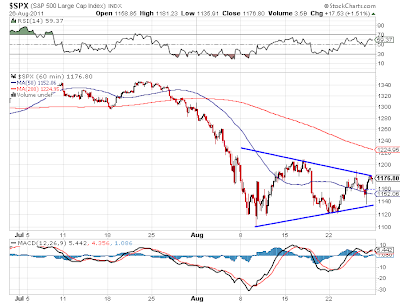 It’s also entirely likely that we’re trying to trace out a similar harmonic pattern.  In 2008, the triangle formed a nice little Butterfly pattern that took SPX down to a 3.00 XA extension.

As of this past Thursday, we completed points X-A-B-C of a Butterfly pattern.  Typical 127.2 and 161.8 extensions would locate point D at 1072 or 1035 respectively.  I like these numbers, as they correspond nicely with some of the other targets we’ve been eyeing (H&S, etc.)

A 3.00 extension would mean 888.  I’m not currently looking for anything that extreme (but certainly wouldn’t complain.) 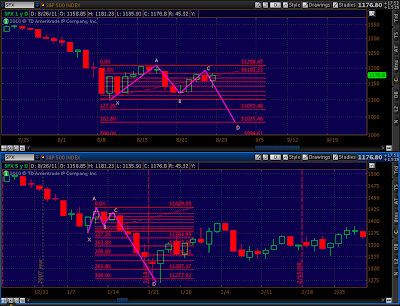 There are a lot of other indicators sending mixed signals.  For this reason, I’m going to handicap this idea of mine at about 60/40.  If I’m wrong, we head back up to as high as 1250 before heading much lower.  So, I’m not terribly concerned about timing, as the ultimate destination is the same.

In any case, we should know in the next few days.  There has been a surfeit of horrid economic news, and one of these days very soon it’s going to overwhelm the Plunge Protection Team’s best efforts.