I can’t for the life of me figure out why investors ignore chart patterns. 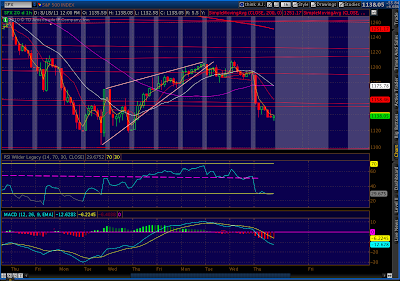 Someone could make a very nice return on their portfolio by focusing solely on rising and falling wedges. 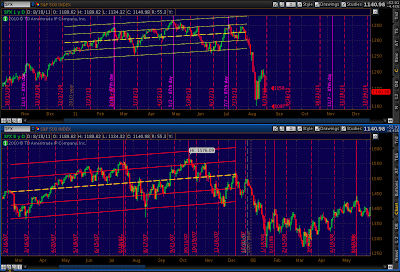 Take a look at the past five years, and a very interesting channel that’s developed. 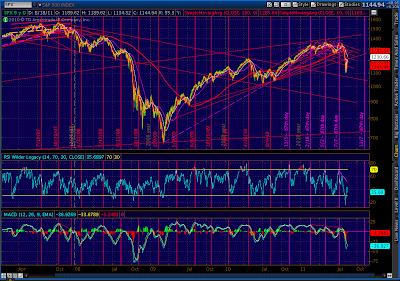 I believe there’s a good chance we see a bounce off the upper end of that channel, currently around 1067 (of course it declines every day.)
Note also that the comparable 1/23/08 low lined up with a large dip in March 2007. 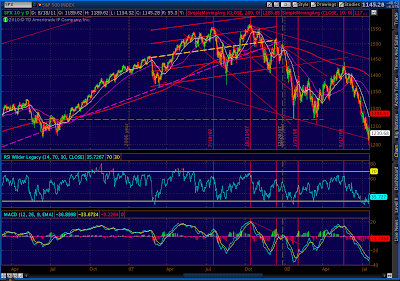 The equivalent dip in the past year, of course, was April – August 2010.  It just so happens to coincide nicely with the upper channel line from the chart above.  That line, BTW, is actually a fan line since it originates at the 10/11/2007 high. 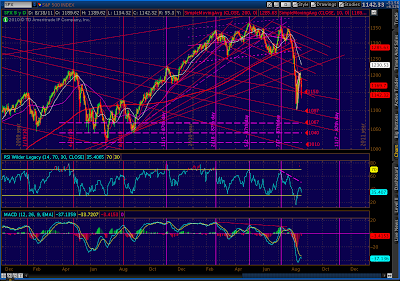 It touches the Apr 26 2010 high on its way to 1067 (today’s value.)  Other potentially relevant fan lines are marked as well.  Note, for instance, that we initially stalled this morning at the fan line touching the Nov 5, 2010 high — a miniature copycat of the Apr-Aug 2010 pattern.
I’ve also marked relevant horizontal support trend lines from that pattern, which is fast becoming the more relevant touchstone for the market’s present direction.
One caveat: since this is a P[3] rather than a P[1] down, we can expect to see anomalies develop in the 2007/2011 comparison.
We’ve already seen one big one, with a wave 3 down that greatly exceeded its 2008 equivalent in price.  It wouldn’t surprise me if the current wave 5 was similarly larger in comparison to its 2008 equivalent.
After the bounce, then what?  Again, since this is P[3] and not P[1], the ultimate decline will be greater than in 2008-2009, which was a mere 900 point drop in the S&P 500 and 7,700 points on the Dow.

SPX finishing off a little rising wedge and bearish Gartley pattern.  Should see resumption of selling here at 1148. 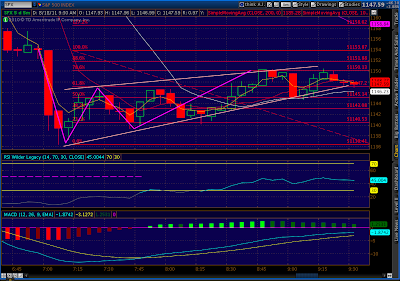 The sell-off is looking pretty vicious, as expected.  If we follow the 2008 script we should end up somewhere around 1070 — possibly by tomorrow.  But, since wave 3 was stronger than in 2007, it’s entirely possible wave 5 will be, too. 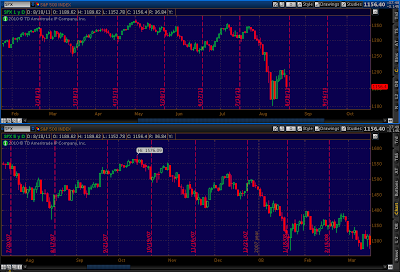 As I mentioned last night, these figures are going to make cases both for and against QE.   Unemployment, along with business conditions, is getting worse.  But, inflation is also on the rise.  In the late 70’s – early 80’s, we called this stagflation.  But, we didn’t have the same oppressive levels of debt to contend with.  Throw in the debt — with tentacles strangling consumers and governments alike — and the ongoing stock market crash and we have the perfect setup for another depression.

EXISTING HOME SALES:  Sales off 3.5% from June to annual rate of 4.67 million versus expectations of 4.99 million.  This completely negates the increase in pending sales recently reported.  Median prices also fell, coming in at $174,000, down 4.4% from July 2010.  June prices were revised sharply down from $184,100 to $176,100.  Cancellations continue to be a problem, due largely to appraisal and loan issues. 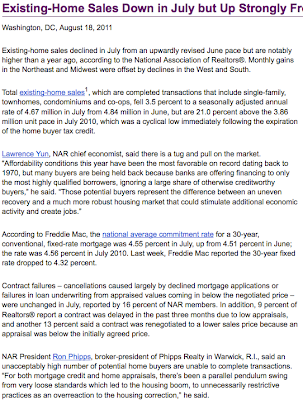 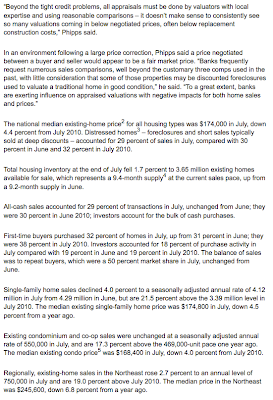 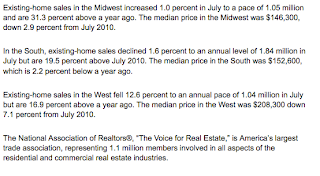 PHIL FED BUSINESS OUTLOOK:  Ugly on a stick, with indicators declining sharply across the board.  Note the special questions on the last page: 30% are planning plant shutdowns or cutbacks this summer.  More unemployment on the way. 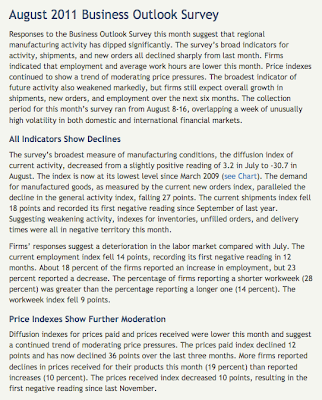 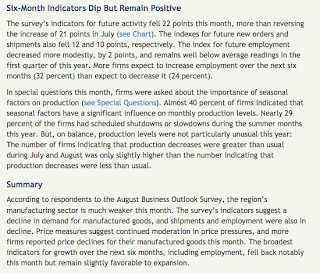 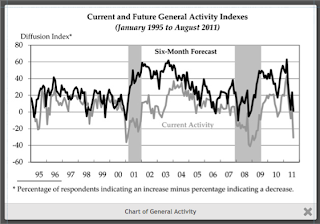 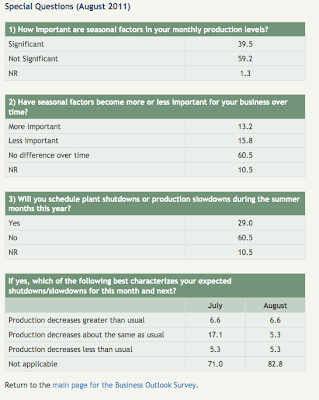 INITIAL CLAIMS:  No surprises here.  More of the same bad news, with 408K new claims as opposed to the 400K Wall St expected.  Continuing claims at 3,702K versus expectations of 3,698K. 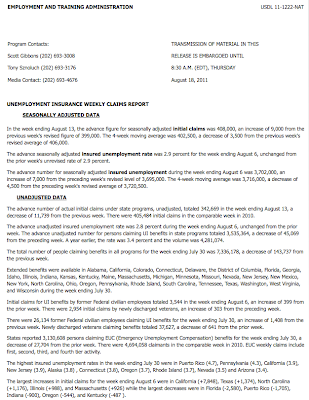 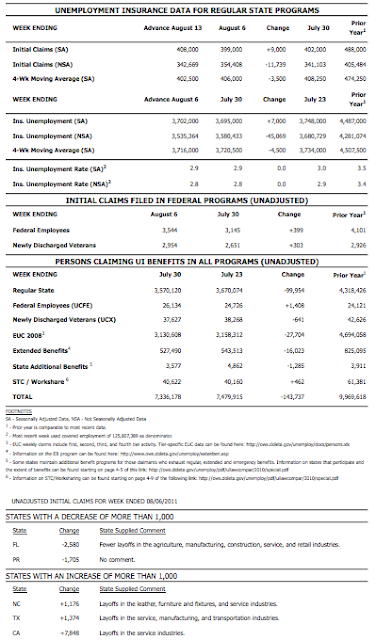 CPI:  No real surprises here.  The index lags, of course, so energy is likely to fall significantly if/when a drop in oil prices works its way through the system.  New cars are flat, confirming auto manufacturers have no pricing power whatsoever.  Would not want to be long GM at this point. 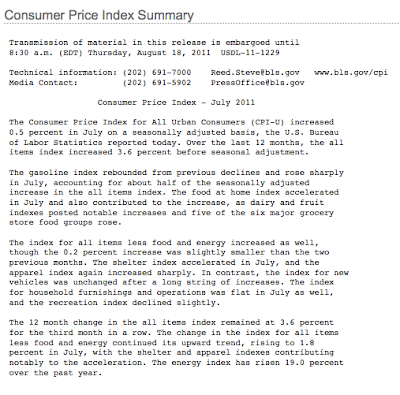 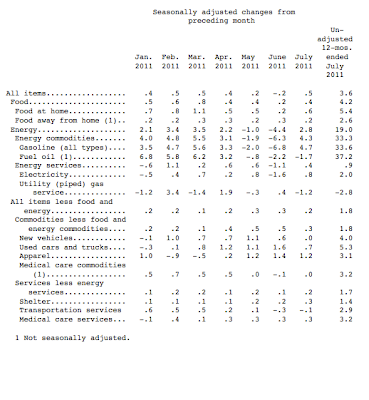 CONFERENCE BOARD:  Leading economic indicators — has to be considered a puff piece given the contrary data in every other report released this week. 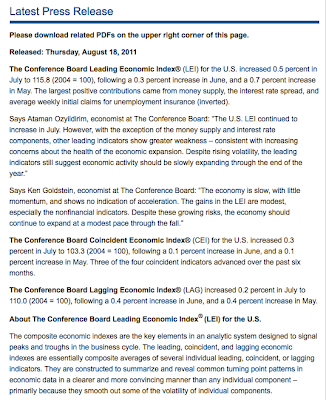 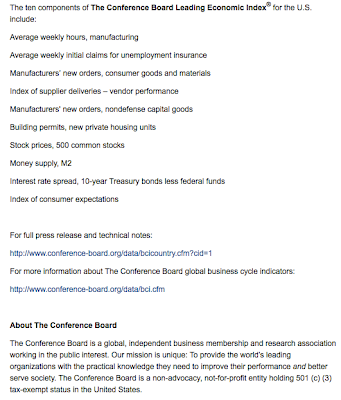 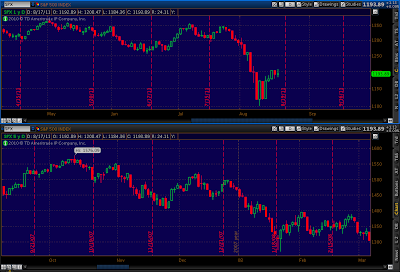 It has come to my attention that EWI has now officially embraced the comparison I first discovered in May.  Apparently they’ve gone from questioning (on July 15th) whether there’s any “forecasting benefit in analyzing this chart” and “haven’t found any price and time relationships between the two moves that would allow a more specific forecast” [see OMG, WTF and Money Back Guarantees]  to “the structures remain remarkably similar.”

It’s too bad they didn’t jump on board in July — before the 200-point move.  Better late than never, right?

For anyone who’d like to peruse tomorrow morning’s reports themselves, these are the links that should work.  As always, I’ll try to get at least a synopsis posted as quickly as possible.  But, it might be a busy morning.