In coming back to the -2 std deviation line of our regression channel at today’s low of 1274.73, we’ve finally completed one of the H&S patterns I’ve been following.  This one has a sloping neckline (blue, dotted), and is the 2nd cousin to the one everyone’s been watching.  Here’s a peek: 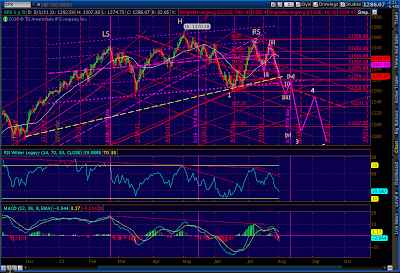 The other, better-known but equally valid pattern has a flat neckline and completes at 1258.07. 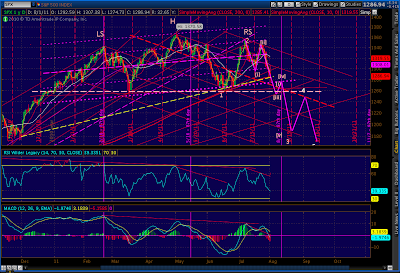 The only practical difference between them is the price objective, which is established by the distance between the pattern high and its corresponding neckline value — about 112 points.

The first pattern objective, therefore, would be 1163, and the second would be 1146.  Either will help get us to the new lows coming later this week.

In terms of targets and timelines, we’re still following the 2007 script.  The direction and speed has been spot on, as the purple line above indicates.  This is the exact same trend line drawn 10 days ago and has done a remarkable job of showing us the way.

We might get another pop up when the debt deal is finally done, but the anti-deal sentiment is so strong now, it’s hard to imagine more than 20-30 points if that.  It’s more likely we go down and test the 1258 lows before any meaningful bounce occurs, probably to backtest the -2 std dev line (purple dotted) before beginning the next wave down.

Thought for the day… The argument has been made that US stocks are able to advance in the face of a crummy US economy because “the stock market isn’t the economy.”  How many times have we heard that refrain?  US companies are global now, and conduct 40% of their business in other countries where everything is hunky dory.

With PMI confirming a pretty ugly global economic picture (see below), it seems that argument isn’t quite as compelling.

SPX thought about respecting the Gartley .786 retrace and TL at 1282.92, but it looks like the economic news is just too overwhelming.  Here’s the daily chart.  Note we’ve broken through the trend line from the last lows I mentioned in yesterday’s post (yellow dashed line).

Next up is the TL from the Apr 21 gap (orange dashed line.)  It’s stopped plenty of declines before, but its days are probably numbered. 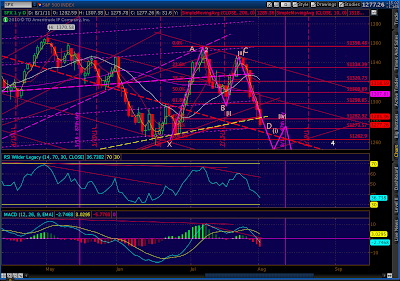 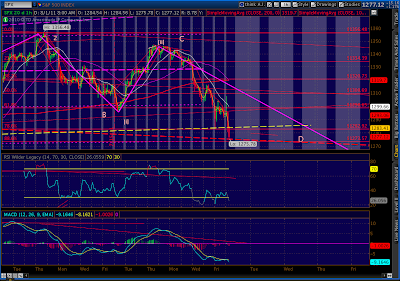 As I mentioned in yesterday’s post, the last two times the US PMI came in negative like this were May 2 (the 1370 high, prompt reversal) and June 2 (a 31-point decline in SPX.)

The Eurozone PMI report came in even worse than the US.  It’s worth a read. 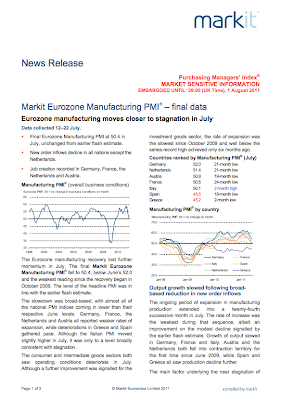 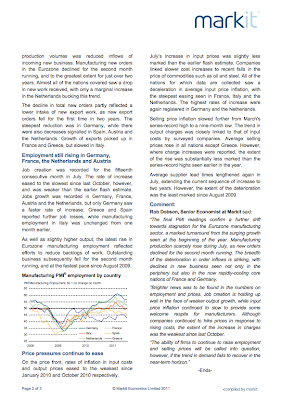 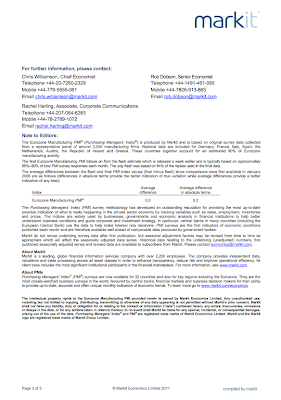 The ISM Manufacturing Report on Business came in every bit as negative as I expected.  The PMI is at 50.9, a 4.4 point decrease and well below the 54 the market expected.  It totally negates June’s increase.  The breakdown: 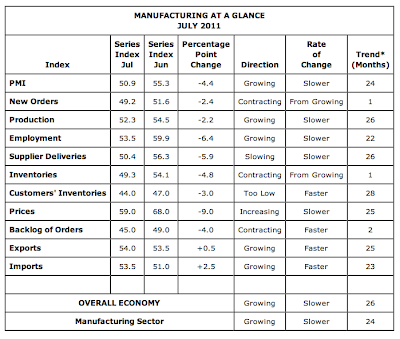 Import/export activity was up slightly.  Every other category fell off, indicating a slower rate of growth, or outright contraction.  New orders contracted for the first time since June of 2009.   And, backlogs and customer inventories are contracting at a faster rate.

The 50 point level is the division between growth and contraction, so the index still represents a slightly positive outlook.  But, the trend is clearly moving down again, indicating a contracting economy in the very near future unless something dramatic happens on the upside.

Here’s a link to the full report.  The non-manufacturing report is due out Wednesday morning.

Looking ahead, here’s a comparison of the USD/CHF vs ES reaction to the debt ceiling “news”… 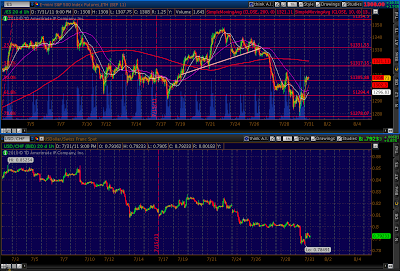