Posting this pretty late at night, only because I needed a long walk on the beach after a day like this.  Don’t know about you, but my head’s still spinning.

We got exactly the move I was looking for; just didn’t expect it all at once like that.  The goal was 1250 by Friday, as has been indicated on my charts for the past 2 weeks.   This could mean there’s more momentum here than expected, which might indicate a deeper drop.  On the other hand, it could mean we’ve achieved the capitulation that’s typical of a short term bottom and bounce (sorry… temporary cessation of crash-like behavior).

We saw a good amount of divergence toward the end of trading, especially on the 60 minute chart.  And, we’re just 5 points away from horizontal support from the Mar 16 low.  We also nearly tagged the TL I’ve been expecting to bring a pause to the decline.  And, last,  S&P surprised no one by caving (see the 1:40 post below) on their downgrade threat. 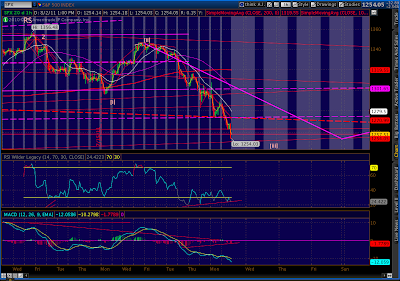 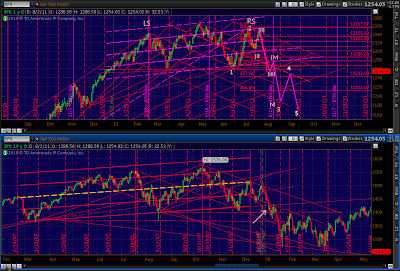 If I’m wrong, and we get no bounce at all, I’ll likely chase after it like a drunken fool with about half the funds I pulled out today (leaving the rest on the sidelines just in case.)

I know we’re technically oversold.  I know there are others who see this as a huge buying opportunity.  I know the put-call ratio is probably through the roof (not even looking tonight.)

But, I am fairly well convinced our economic goose is cooked.  Has been for a while…but the secret’s out.  And, now that our own little crisis is averted for another 15 minutes, we can start worrying about the train wreck across the pond.  So, yes, I’m as bearish as ever… at least until further notice. 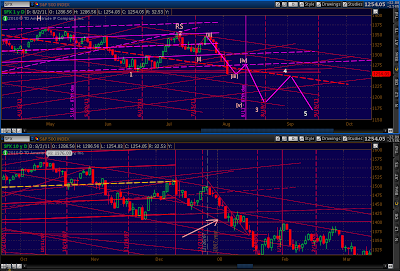 Bottom line, I’m gonna “dance with the one what brung me.”  The 2007 pattern has worked beautifully till now, and I see no reason to abandon it at this stage.

We hit our H&S 1267 target (see below), bouncing at 1265.59 just a bit ago.  Whether the bounce has any more juice in it or not is unclear to me.  But, I did take profits on a small percentage of my portfolio.

My best guess at this point is we close somewhere between 1269 and 1274 today, then trade in a range of 1250 and 1275 through the end of next week before turning down in earnest.  But, as we near a potential turning point, the exact time and place of the turn gets a little murkier.

I’m not really looking for a bounce any higher than that unless: (1) unemployment numbers are miraculously better, or (2) S&P and Moody’s follow Fitch’s lead and leave the credit rating alone.  We can only imagine the level of pressure they’re getting from Washington.  And, who would be surprised if they caved?

The H&S pattern is playing out nicely so far, with SPX down to 1275 and gaining momentum.  We might run into some resistance at the -2 std dev line of our regression channel, which is also yesterday’s low (bottom purple dashed line.) 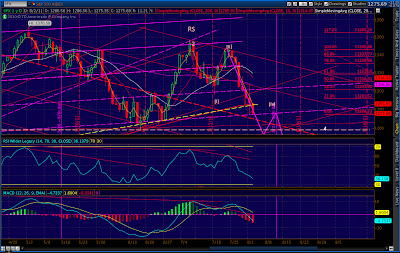 If we can break through, the dashed red trend line has offered fairly strong resistance in the past, but will fail — either today or in the near future.

That’s also where the regression channel  -1 std dev line is now, and where the 50 day SMA will be in a couple of days.  There’s also a pretty good trend line intersection at that same level.    It’s anyone’s guess whether it’ll reach that high, but I’d put it at 50-50 if a bounce began right now.

Naturally, the .382 level changes if we make new, lower lows.

SPX continues to slip and slide, reaching 1279 — near its opening low.  In so doing, it has completed a little head & shoulders pattern, indicating a downside of 1267.  Should play out in the next 15-20 minutes. 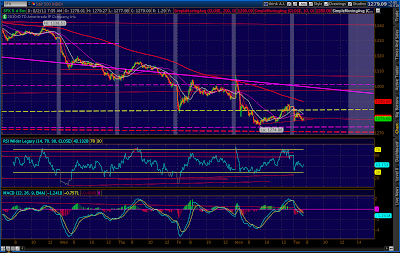 Still watching the ES vs USD/CHF relationship, which does a great job of showing how well equities and the dollar continue to correlate. 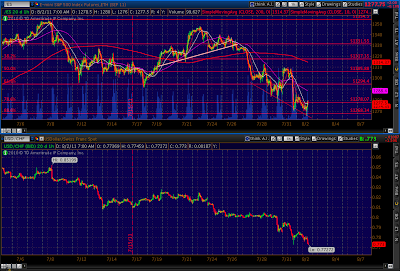 I show the Swiss Franc because it has performed the best relative to the dollar and is as strong a currency as there is. 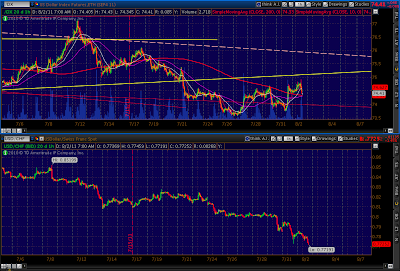 The chart suggests that, while the USD continues to slide vs the CHF, it seems to have bottomed relative to everything else — particularly the euro.