The market is moving higher, probably towards the 1400-1405 area we discussed this morning.  This response to the “no news is good news” Fed statement feels very much like a speculative blow off.  JPM and the financials are leading the way higher, probably heading for a 10% gain in the short run, as JPM announced a dividend increase and stock buyback.

There are two potential harmonic patterns to watch.  For now, my money is on the Bat with .886 target of 16.49.  I’m adding some XLF calls and FAZ puts to hedge out my existing short position over the next few days — if it takes that long.  A reminder, Friday is OPEX. 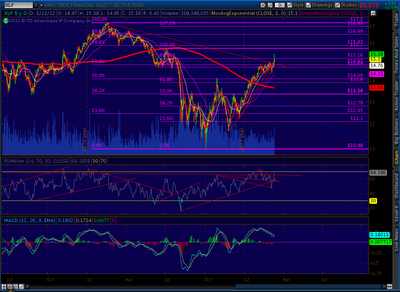 Negative divergence is very marked at this time, and VIX got a great bounce off the lower price and RSI trend lines which, if it holds, gets a nice bullish (for VIX) channel started.

A tag of SPX 1401 on this strong negative divergence looks like an attractive set up to add to shorts.

Nothing of any import in the Fed statement, except a little more cautionary language re inflation.  But, they blame it on higher oil prices, which they then shoot down as being transitory.

On another note, the homebuilders ETF XHB has finally reached its Butterfly’s 1.272 Fib level and completed the RSI back test we’ve been watching.  I’m opening a 5% short position in our model portfolio. 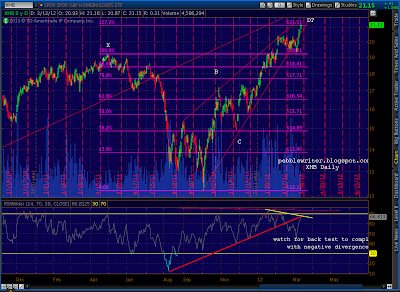 And AAPL, everyone’s favorite stock, is nearing another Crab pattern completion in the thin air just beyond the rising wedge in place since 1994.  Look for a reversal just shy of 568, which would tie in nicely with NDX Crab pattern discussed below. 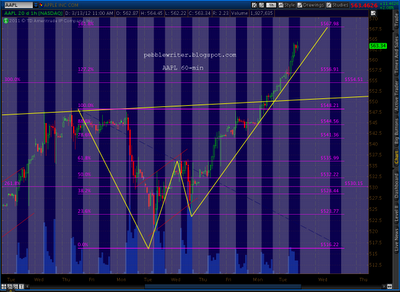 RUT and IWM continue to push slightly higher, but show every sign of being stuck below their previous highs — with RSI back tests, TLs off the previous highs and Bat pattern completions looming just overhead. 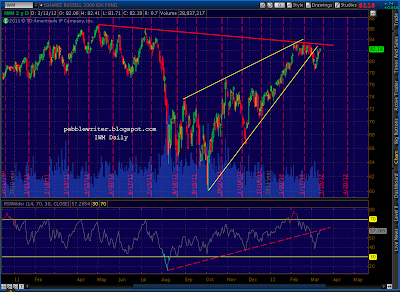 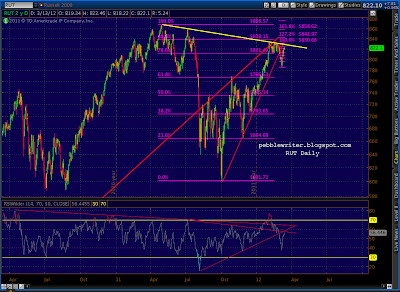 Just an observation, but I’ve seen a big uptick in insider sales over the past couple of days (CEO’s, Chairmen, CFO’s… Google, Qualcomm, etc.)   Think they know something we don’t? 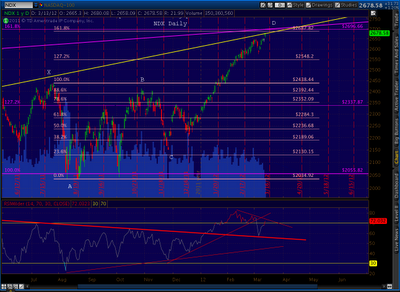 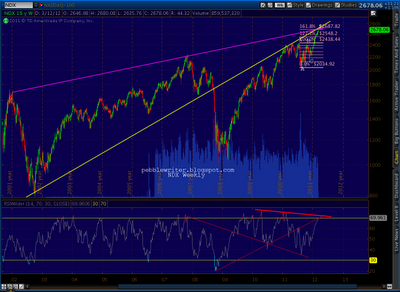 The Fed statement is coming up at 2:15 PM EDT.  See you on the other side. 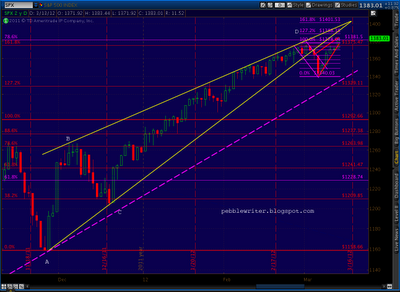 I’ve adjusted the RSI TLs to as bullish a position as I can imagine, and there is room for a slight push higher.  A tag of the dashed yellow RSI trend line should complete the back test; although, SPX prices themselves could go higher as a result of the negative divergence already present.   The RSI section is expanded in the chart below. 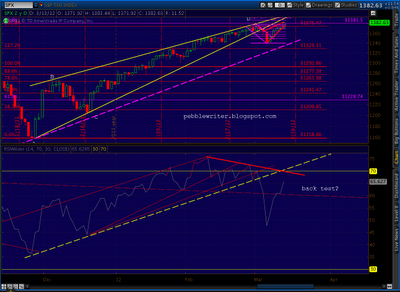 Interestingly, the 1.618 of the small Crab pattern (in purple, at tip of r.w.) we discussed below is at the absolute apex of the rising wedge on the daily chart.   I’ve seen this pattern play out many times before, where the break down of a rising wedge results in an overshoot of the previous high, tagging instead the wedge’s apex — such as this occurrence in 2009-2010.

Here, the final push beyond the apparent break down of the rising wedge was a Crab pattern (red) that played out precisely to the 1.618 extension and, also, within 9 points of a Bat pattern (purple) off the Mar 09 low. 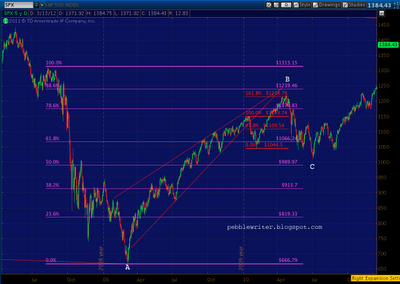 The exact same thing is happening with VIX, which is tagging the apex of the falling wedge VIX had been in prior to its break out and exaggerated back test. 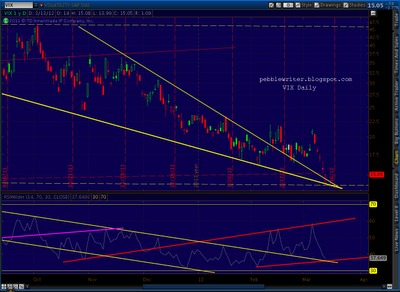 VIX has broken one of the trend lines we discussed yesterday and is holding at the other…for now. 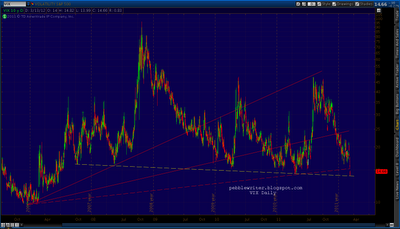 The close up shows a tag of the TL, as well as the expanded channel we discussed on RSI and a drop well below the lower Bollinger Band and a tag of the yellow price trend line (formerly known as the falling wedge.) 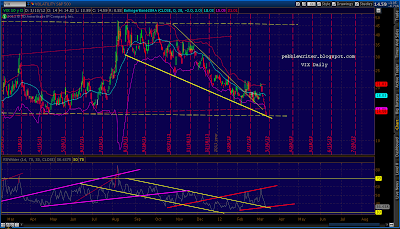 Stocks holding on to the overnight ramp courtesy of positive German sentiment survey…  just bested the previous high by a smidge, setting a new high of 1378.75.  Two leading outcomes are a double top and a bullish Crab pattern. 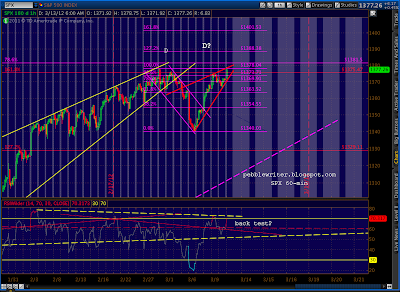 The double top, which is intact as long as the beat of 1378.04 isn’t by “much,” also means the back test we’ve been watching on the daily RSI holds.   The 60-min chart above shows the back test holding at a trend line connecting Feb 3 and Mar 9.

The alternative view, a Crab pattern, complements the fact that we’ve completed a small inverse H&S pattern with 1340 as the head and 1375ish as the neckline.  The target would be around 1410, though the 1.618 of the potential Crab comes in at 1401.53. 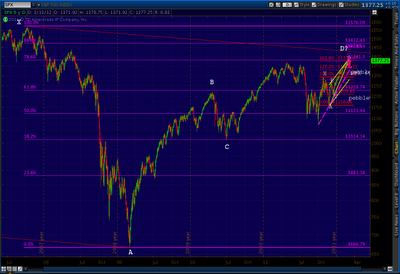 A close up of the daily chart shows the RSI is currently beyond the limits of a back test, but what counts is the value at the end of the day.  Though, I could live with a slight overshoot on the day. 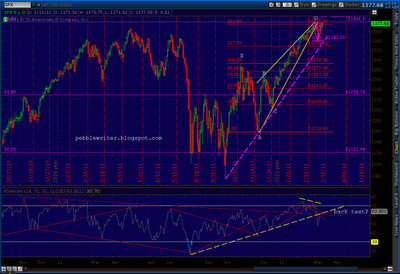 An extreme close up shows how RSI has gone sideways more than anything the past two days.  In any case, we have significant bearish divergence on the daily chart.  I’m prepared to scale back shorts and add long positions at 1383 if the technical picture turns positive along with prices. 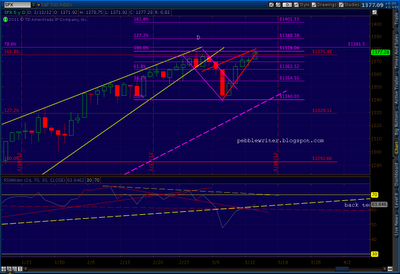 The ECB reported that banks utilized its emergency overnight lending facility to the tune of EUR15.61 billion Monday — a doubling of relatively high interest rate (1.75%) borrowings since Friday’s EUR632 million.  Deposits remain elevated at EUR795.2 billion — with most of the banks’ borrowings under the LTRO going directly back to the ECB itself.  Total borrowings (two operations) under LTRO now total EUR1.02 trillion.