If I were Jamie Dimon, I would have pulled the same gag — announcing a stock buyback and dividend increase hours before the Fed was to announce the stress test results.  It gave JPM a shot in the arm, enabling a 7% ramp on the day.

Why was it such a good idea?  JPM was coming up on its .618 fib level, and more importantly was about to run smack dab into an important internal TL and a fan line off the Mar 09 lows that stopped the Oct 2011 rally in its tracks. 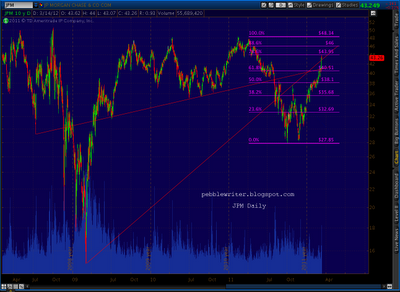 After the announcement, JPM cut through those trend lines like “buddah” — cruising up to the .786 where it’s currently taking a breather on its way to the .886 at 46.02.

Only problem is, he forgot all about the bigger, badder fan line coming down off the Mar 2000 all-time high.  It’s currently lurking just overhead at…umm… a smidge over 46. 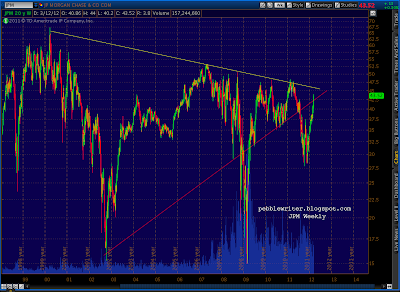 It’s pretty rare that VIX closes below its Bollinger Bands without a strong rebound over the following days.  Combined with the nice bounce we got off that long term trend line yesterday, I think these are very attractive levels at which to buy — whether for long term or just a rebound. 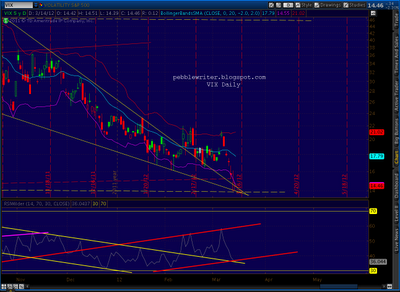 Meanwhile, SPX closed above its Bollinger Band and is closing in on its Crab target of 1401.53. 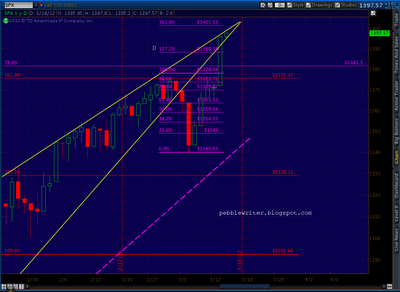 Not to beat a dead horse, but the RSI is still back testing a broken major trend line, as well as bumping up against the red TL that shows the negative divergence.  For this back test to complete at the same time as we’re completing a bearish Crab pattern is significant. 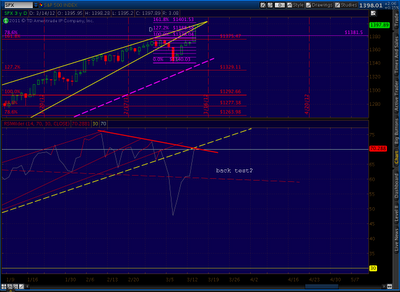 RUT RSI has put in a little hook, indicating the back test is likely complete and the next move is down. 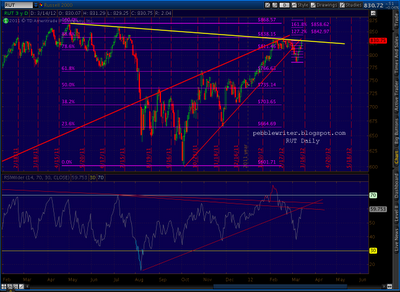 My only slight hesitation is that we never quite tagged the 838.15 Bat pattern .886, coming up 5-pts shy at 833.02.  If we got a strong intra-day push to 838 to correspond with SPX hitting 1401, the RSI’s would still have a clean back test on the day and we’d have a cleaner downside picture going forward.

The other possibility, because Friday is OPEX, is that  RUT lingers in this 830-838 range for the next three days, tagging that .886 Fib before starting down. 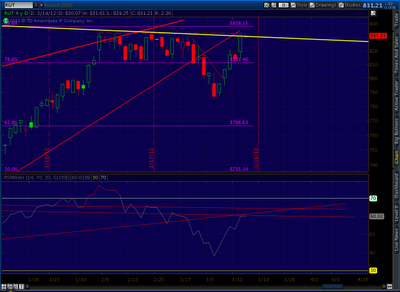 But, I should stress, harmonic patterns don’t require precise tags on their Point D.  Many, many patterns come up short or overshoot by a few points.  So, those who are bearishly inclined should trade accordingly.