I’m not really a scalper.  Our swing/directional calls have been pretty successful and are a lot less stressful and time consuming.  But, we’ve had day after frustrating day of watching breakouts and breakdowns fizzle before they could even get started, leaving us with subpar performance for August (+5.4% versus our average of +12.2%.) 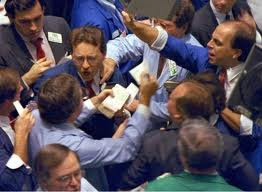 Today marked the 21st day in a row where we traded within 5 points of the fan lines from 2007.  Complaining hasn’t seemed to help, so I decided to scalp this schizophrenic market and try to pick up a few points per day — at least until the Central Planning Sweepstakes winners are announced and things return to normal (hopefully by the 13th.)

It’s good for an old dog like me to get the blood flowing by getting reacquainted with some old tricks.  But, buy and hold types might prefer to brush up on their golf game.  We’ve averaged 12 trades/month since the new site opened in March.  In the past two days alone we’ve traded 9 times.  Thankfully, it’s been volatile enough to pick up 2.3% in the process.

Emini’s are taking on a descending triangle look, and approaching the .618 time point where there should be either a breakout or breakdown.

It’s worth playing along on the downside at the opening to see if there’s another trip to the lower bound at 1395.  A stop at the upper bound (1406) should provide protection.  I’ll take a short position on SPX when it opens.

If the 15-min RSI rebounds at a TL coming up, I’ll switch sides and play the upside.

I still like the idea of a Butterfly Pattern getting going here.  I’ll post a chart in a moment.

If/as we approach the upper bound, we’ll have to be wary of a reversal that could start a Gartley in the other direction.  The BC leg was roughly .618 of the AB leg.

The 5-min RSI has provided a nice road map this morning.  Just broke out of its little corrective channel — but that rising purple line is one of our major channel lines.  Make or break time for this little rally.

If we hit the upper bound, I’ll likely take profits and wait for a breakout to get back in.  Otherwise, cash sounds fine.

Channel broke down, but RSI picture isn’t so clear.  Will stay in cash for now.

It just now occurs to me that the frequency with which SPX traverses between the upper and lower fan lines (currently at 1408.42 and 1404.80) has provided some tasty trade opportunities.  In the past 20 days, it’s ventured into the gap 30 times, 22 of which traveled to the other side and 8 of which failed.

Given the 4 point gap and using reasonable stops, that would have translated into a nice little trading system:  22 x 4 = 88, 8 x -2 = -16, net = 72 pts. Probably not useful going forward, as we should break out of this tight range once the Central Bank Sweepstakes winners are announced.  But, for now, the an lines are definitely exerting a lot of influence.

Changed my mind — don’t like the RSI pattern.  Will wait for a better setup.  Looks like more downside to me.

So much for ignoring the trend!  RSI broke up through its FL and SPX appears headed for the 1408.40 side of the gap (also the triangle upper bound.)  As before, if it breaks convincingly through 1409.55, I’ll consider it a breakout of the triangle and tag along on the upside.  If not, happy here in cash after making lunch money for the day — or might take another run at a reversal.

SPX approaching that white TL (1405-ish) again.  If it breaks through, should be a good short.   Chart in a minute.

Yikes!  That was a break through.  If 1401.25 broken, immediate target is 1400.  I’ve added some channels (yellow, dashed) that seem to be working pretty well in the short run.  We just bounced off 1401.38, will likely back test the presumed channel line in red — also a yellow channel line.  This is really bouncing around, I’ll set a loose stop at 1405 — as we might go back and back test the broken TL (white.)

I’ll give it another point or so to see if it’s stopped by the TL back test.

Going ahead and closing out the short here at 1403 for a whopping 2 point gain.  We’ll probably get a bounce off the RSI TL, and I like the idea of being in cash again overnight.