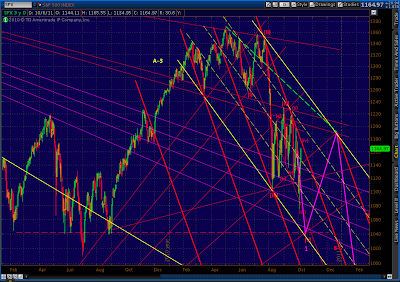 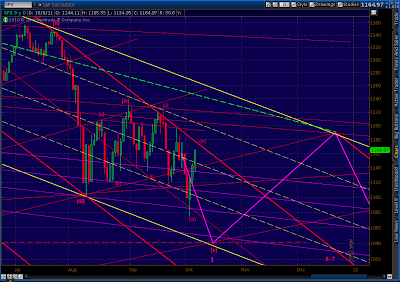 The strong counter-trend rally is developing a rising wedge with an apex of around 1180.   This coincides well with the Bat pattern .886 (mentioned below) of 1182.

SPX has held pretty religiously to the B-6/B-7 channel thus far, the only excursions being intra-day shadows.  So, it’s likely we’ll tag the 1182 level and retreat to the .786 at 1170, back within the channel line.

If we push decisively through 1195, I’m prepared to reevaluate.

Employment numbers are due out at 8:30.  It’ll be interesting to see if September’s numbers are revised to below the 0% increase that was reported.  Moody’s just downgraded a boatload of British and Portuguese banks.  So far, the futures haven’t noticed.

I mentioned yesterday that I wasn’t thrilled with the presumed Bat pattern because the entry point looked wonky.  Ideally, Point X should be at a clear and distinctive reversal.

I was operating on what I thought was a pretty good EW count.  It has since been proven at least suspect, and probably wrong by today’s rise above 1140.  So, I’m going to keep my nose out of the EW tent and refocus instead on the harmonic picture. 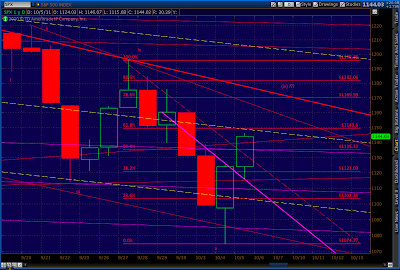 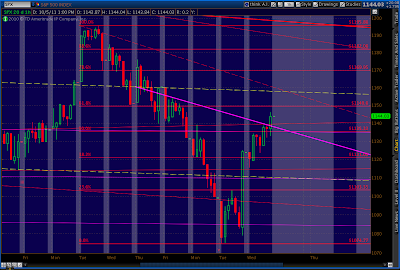 Another possibility arises, though, based on the fact that we came very close to the .618 at 1149.60 today.  1149 could be a Point B, with a reversal to Point C before climbing again.

If we get any kind of reversal tomorrow, look for a rebound to the .786 at 1170 instead of the .886.  This would be a Gartley instead of a Bat, and it would fit just fine with the channel line (B-7 in red) that’s bounded the decline since July.

In any case, we should top out Thursday or Friday and begin a sharp 130+ point decline that wraps up in a week or so.

Keep an eye on the channel line.  While we could easily exceed it intraday, we shouldn’t close above it (about 1173 Thursday, 1169 Friday.) Any such close would be a sign that a lower low is probably not in the cards.