Perhaps some of the forces propping up the market were aware of the analog and threw more ammunition into preventing a repeat [see: Happy New Year and All Aboard.]  They only delayed the inevitable, as the market fell 57 days after the top versus 2007’s 52 days.

The chart below details day-by-day comparisons between the two markets.

But, I think it’s more likely that we’re simply seeing the same pre-plunge analog fart that we saw back in July, and before that in June.  If so, we’re at the equivalent of 3/12/08 and Minor 1 isn’t quite over.

I’m looking for a decline to 1040 sometime around next Friday, which is at the confluence of a number of harmonic patterns, head & shoulder patterns, trend lines and fan lines [see: The Path to 350.] 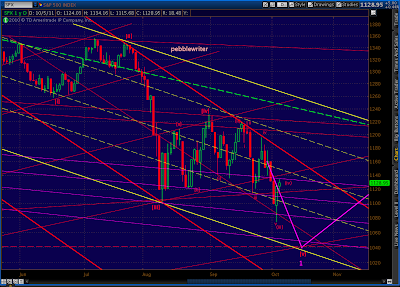 Also, a word to the wise: I’m usually early, and I often underestimate the degree of the declines I forecast.

Yet, their jaws dropped when I ran my forecast of the S&P 500 dropping to 350 past them.  When I mentioned that 350 would be the first wave down of five in P[3], I caught them checking their watches, LOL.  I know it sounds preposterous.  Such a decline no doubt means a Depression.

When I first started talking about another Depression many months ago, most people thought I was ready for an I-love-myself jacket.  Now, I’m hearing it talked about daily in the mainstream press (another reason we’re going to bounce up very soon.)

As my friend reminded me, many US stocks derive plenty of earnings from overseas, and are well-positioned to take advantage of still-strong BRIC economies.  That’s the key question, isn’t it?  It’s pretty clear the US consumer isn’t going to buy as many Cokes and iPhones as in the past.  But, maybe the Chinese and Brazilians will.

Will that be enough to prop up multinational earnings?  And, what about interest rates?   Can we count on 0% bills and 2% notes, or will we see higher interest rates competing for equity investment dollars?  What would that do for PE ratios?  And, what would it do for global liquidity and wealth?

Lots to think about. 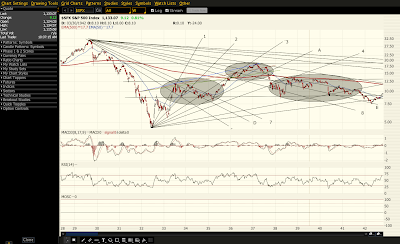