A companion chart to this morning’s NYSE Gartley — the Dow Total US Stock Market Index (DWC) daily (similar to the Wilshire 5,000 — which TOS inexplicably doesn’t offer.) 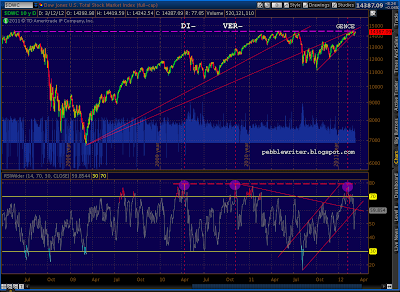 While prices have come reasonably close to that trend line lately, the RSI tag remains elusive — leaving a bearish divergence that should play out as soon as the back test runs its course.

As we’ve all seen lately, the narrower indices (talking to you, SPX and DJIA) have managed to eek out slightly higher highs.  Apparently, it’s easier to ramp 30 or even 500 stocks higher than it is thousands.  It’s a huge test of bears patience, but this non-confirmation will play out.  With short interest and now VIX testing major support, I suspect it won’t be long.

Budget deficit was $231.7 billion in Feb, versus $222.5 billion for Feb 2011.  Receipts were down 6.3% Feb 2012 v Feb 2011, while outlays were up about 2%.  Meanwhile, the CBO projects the deficit will narrow by 16% (huh!?) but still remain over $1 trillion for the fourth straight year.  Not to dwell on the obvious, but an increasingly negative run rate is not the sort of thing you normally see in a recovery.

Continuing the discussion on VIX, here’s the daily chart we were watching last week.  In particular, it seemed the red RSI TLs would pick up the pattern going forward.  As can be seen, though, the trend line was broken by just a little on Friday. This morning’s crack in VIX not only killed off the latest IHS pattern, it sent the daily RSI well below the red TL — meaning that it will have to have a meaningful reversal in order to not remain below the TL on the daily chart. 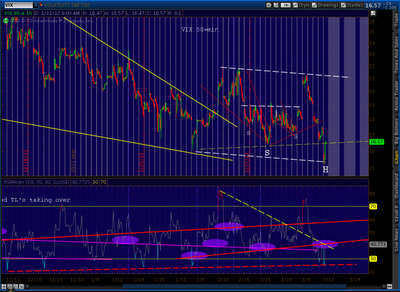 Aside from obvious bullish divergence, the tag of the red dashed line indicates at least an interim bottom.   The yellow dashed line provides a threshold that, if broken, would likely allow VIX to recover its entire daily losses and leave the daily RSI TL unscathed on the day.  We’ll keep an eye on this chart during the day.

Even if we didn’t have a full recovery, there’s the possibility that we’re simply making more of a channel with the red TLs.  The dashed line is drawn parallel to the presumed upper channel line and would still carry VIX higher — in line with the inferences drawn from the charts below. 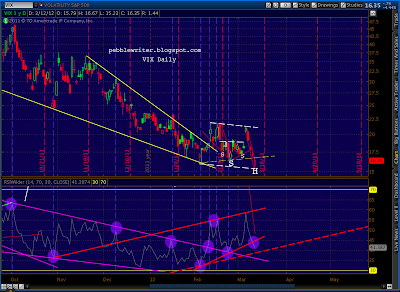 Some follow-up perspective on VIX, which has formed 5/6 of an inverse head & shoulders pattern to match the 5/6 completed H&S pattern on the NYSE (NYA.) 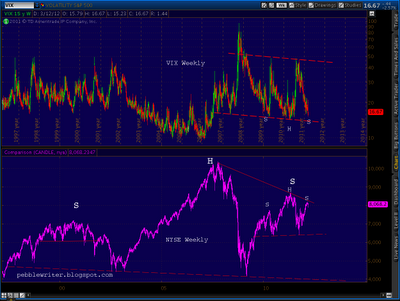 VIX would have to drop to 13.60 or so to tag the trend line connecting its lows since 2007.  A closer look at the daily chart clearly illustrates what’s happened in the past when VIX approached this line. 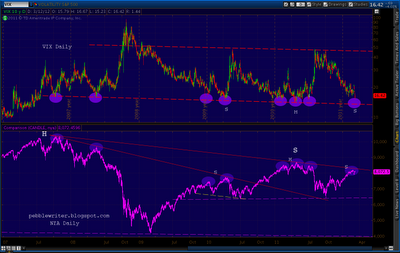 A little eye candy for the bears — a completed Gartley on the NYSE. 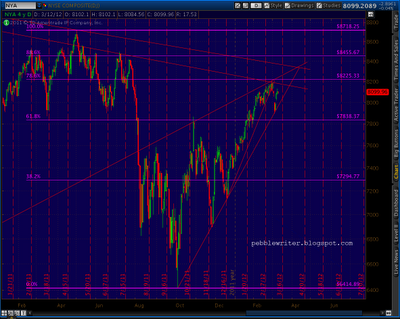 It’s off 0.3% this morning, and SPX is off a few points, so why is VIX cratering? VIX just plunged into the 15s for the first time since days before the July crash, touching 15.23 moments ago.   In every instance except for December 2010, this was a very bad sign for the bulls. 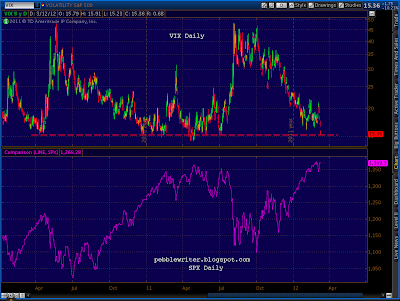 And, as Zerohedge reported this morning, NYSE short interest is back to the levels it’s been preceding every major correction of the past year.  This excellent chart says it all. 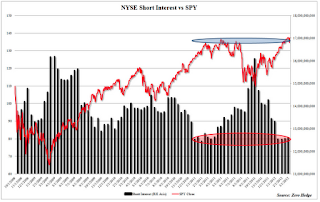 There were quite a few good articles over the weekend regarding how the triggering of CDS will affect banks and insurance companies.  In short, while the debt directly affected has been reported as only $3 billion, there are quite a few more related issues which will also be able to take advantage of the ISDA declaration.