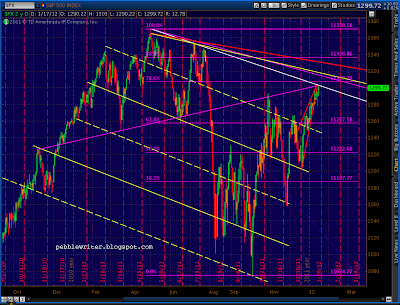 Obviously we’ve tagged the lowest, marked in white.  It’s been my preferred target because it crossed the .786 Fib line in December — the time frame in which I last expected Wave 2 to be completed if it extended beyond my original expectations (which it obviously has.)   The combination of the TL and the Fib level formed the basis for my target.

It also comes closest to matching the channel lines that have shaped the past year (shown in yellow).  Actually, a TL off the July 7 high to today’s high almost exactly matches the slope of those channels.

So, is this the TL that matters?  Is Wave 2 finally done?  Note that this morning’s high also matches the TL coming off the 2010 pattern which tags the March and June lows (in purple.)  In past topping patterns, there were usually similar TLs winding their way through and dictating Wave 2 turning points.

Looking for clues for the turn…  focused on financials this morning.  Citi just completed a nice little Gartley at the .786 Fib on the 60-min chart. 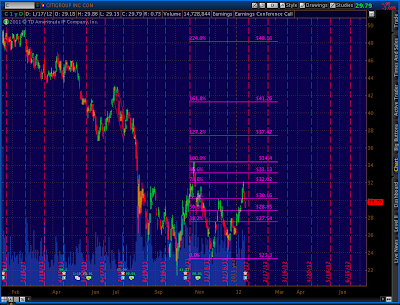 And, XLF testing last weeks high with a small Bat pattern that should peter out at the .886 (ignore the overnight pricing.) 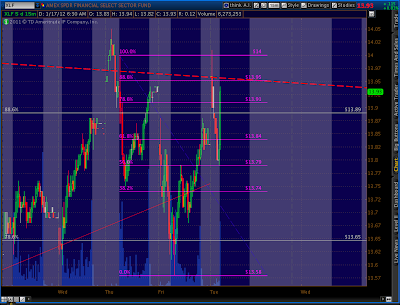 BTW, WFC reports an increase in earnings of $700 million, with a $600 million reserve release!?  Total garbage.   It overshot its Crab just a bit on the headlines, but this loser should crap out once investors dig a little beneath the surface. 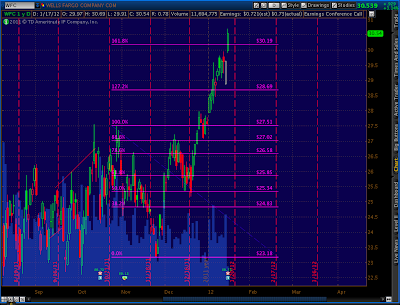 It’s very frustrating to see company after company get away with posting results that deliberately misstate reality.   Shame on them and the complicit “regulators” and “analysts,” and shame on the investors who believe the headlines.

Speaking of  duplicity, Goldman is retesting the trend line that’s rebuffed the past several attempts to break out on the upside.  You could make a falling wedge out of this pattern, which would be potentially bullish.  But, the more likely guiding pattern is the steep channel pointing towards the Bat completion at 64. 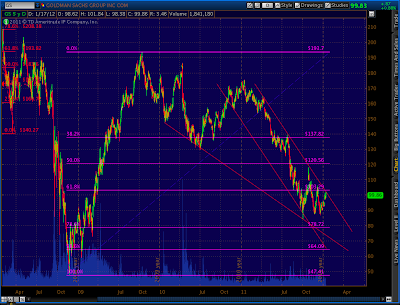 And, last, this from Experian, which reports an increase in first mortgage default rates from 1.9% to 2.19% since August, even as credit card defaults fell slightly.  Apparently, the anecdotal stories balancing their budgets by not paying their mortgages are true.

I’m pretty sure the Fed’s bailout efforts (buying toxic mortgage debt from the banks otherwise on life support) will do little to reverse this trend.