It’s been a few days since we looked at whether the fractal is still alive or not.  I suspect it, and the analog between 2007/8 and 2011, simply became too well known.   TPTB have very strong vested interest in keeping this crap game afloat, and a July style plunge would be very bad for biz.

I have to accept some of the blame.  Hoping to share the benefit of my discovery, I probably spread the word a little too wide.   I believe I was one of only a handful who saw it coming in July; but, this time around, there were no doubt many, many more.

I’ve seen a huge uptick in the traffic to the site, and many of my charts are ending up on other technical websites — with and without attribution.   I’m considering changing pebblewriter to a member-only site, charging a nominal fee and posting all my short-term and longer-term harmonic set ups, along with a guide to understanding harmonics.

I have a few institutional clients for whom I consult, and I know they would appreciate a tighter circle.  Please drop me a line, let me know what you think.  I can be reached at pebblescribe at gmail dot com.

Now, a look at some charts… 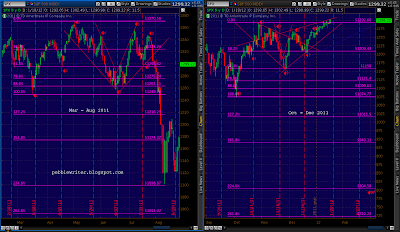 Things were looking pretty good up until about marker #8 on the current (right hand side) chart.  In July, #8 couldn’t push up past #6.  To some of the Ellioticians I follow, this was a truncated C wave.   the ABC also expanded.

Currently, we’ve completed a more traditional zig-zag pattern where C exceeds A in price and is almost equal in length to A.  Rather than expanding, prices have narrowed — forming a rising wedge.  Obviously, time and price comparisons for the fractal have both suffered.

It doesn’t invalidate the fact that we’ve formed a robust rising wedge with growing negative divergence and half a dozen other signs of a top.  It remains to be seen whether we’ll see the same payoff as the Feb-Jul time period; my best guess is that we will. 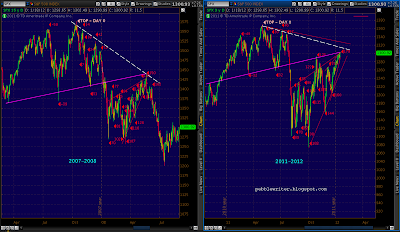 Again, the culprit is the day 125 spike — as well as the size of the corrective wave in July.  A trend line drawn off the Oct 2007 top through the Dec highs provided great guidance for the May (day 150) Wave 2 peak.

This past July, we overshot the corrective wave I expected.  Still, we had a huge downdraft starting on day 57, only 5 days after the analog predicted.  And, the size of the plunge exceeded the 2008 version.  (I’ve made the analogy before — these moves are like rubber bands; stretch an expected move out and it’ll just snap back faster.)

But, because July was higher, the trend line off the top was tilted upward relative to 2008.  As we’ve discussed before, it ranges from 1303 to 1329, depending on whether one counts shadows or not.  So, although we’re off track in terms of the day count, we’re still very much on track in terms of the chart pattern.

Throw in all the other indicators (the third rail, negative divergence, narrowing leadership, negative divergence both on technical terms and relative to VIX, XLF, RUT, etc.) and I’d say the upside is very, very limited.  I suspect that, years from now, we’ll look back at the obvious similarities and forget all about the several weeks of divergence between the two.

In the meantime, that ol’ rubber band just keeps stretching… 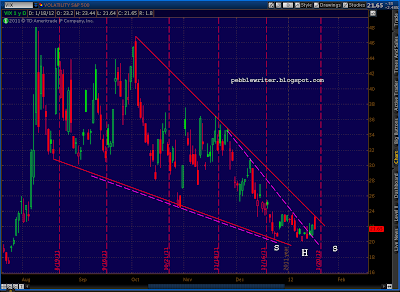 I suspect that the Bat pattern we just completed at the .886 on the 60-min chart will constitute a Point B for a larger Crab pattern that breaks VIX out of the larger wedge, too.  If so, look for a completion of the inverse H&S pattern that’s setting up — with potential to 28-29. 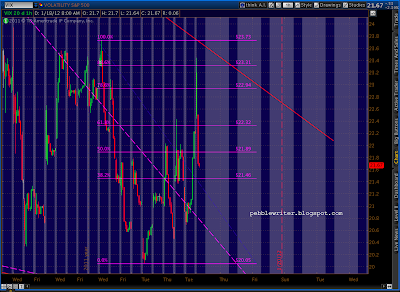 AUDUSD has been a great indicator for the direction of the stock market.  Currently, it’s saying we’re on a precipice, but there’s likely a little more juice left in the market before the downturn gains momentum.

The AUDUSD patterns have followed some pretty clearly discernible paths.  In general, the Aussie has been steadily appreciating versus the USD.  But, stock market plunges in 2008 and 2010 dropped it from the channel it’s been following since 1999. 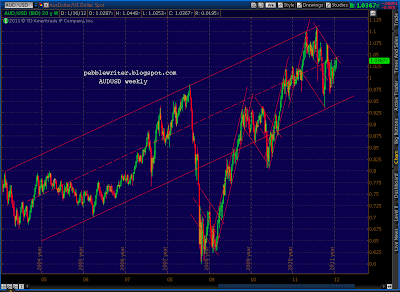 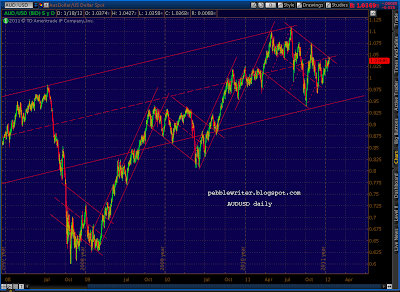 Over the past few days, we’ve bumped up against the upper boundary of the current corrective channel.  Recall that this trend line correctly forecast the past two steepest plunges: the July 240-pt selloff and the late October 130-pt drop. 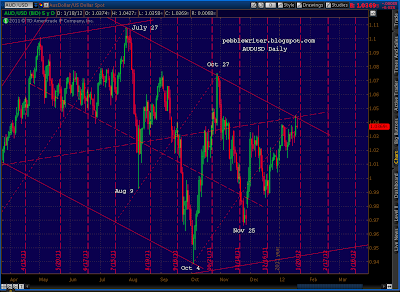 So, when we approach the channel line for a third time, we should all pay close attention.  As always, the question is “are we there yet?”  There are two harmonic patterns I’ve been watching, a large Gartley (purple) and a smaller Crab (red) pattern (updated 10:30 am). 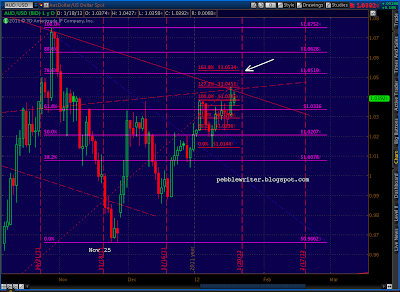 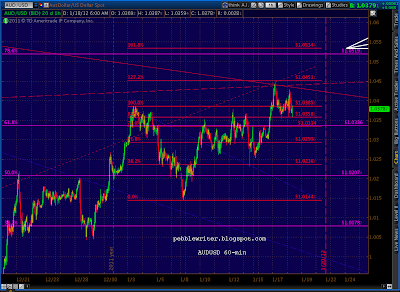