I have to be out the rest of the day, but here’s what I see going on right now.  We’re still in backtest mode on just about everything.  SPX, in particular, is testing the fan line we talk about below.  If we drop below 1214, look for a downdraft to 1200 or lower. 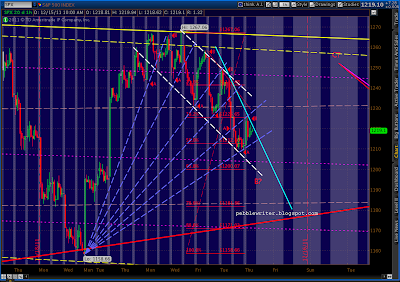 EURUSD completed a bearish Bat pattern this morning, reversing right on the .886 Fib level.  Since then, it’s fallen back some but is still loitering around 1.300.  I look for it to fall off more as stocks decline.  Note that it reached its intraday low of 1.2957 around 4am, when the SPX futures were right at 1200. 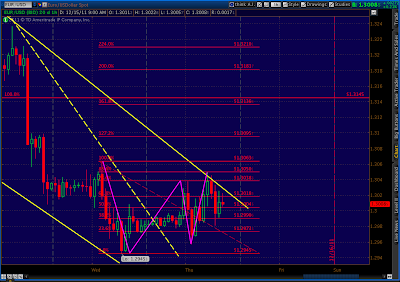 A return to these levels during cash trading hours would satisfy the ideal fractal conditions perfectly.  It would also complete a falling wedge with positive divergence for SPX, and complete a bullish Bat or Crab pattern for EURUSD.  In other words, promising conditions for a return to SPX 1255 and EUR 1.32-1.33.

The market caught a bid, and flirted with a return to double-digit gains.  It’s more likely, though,  just backtesting the last fan line.  The decline over the past few days has been a textbook example of using fan lines in technical analysis. 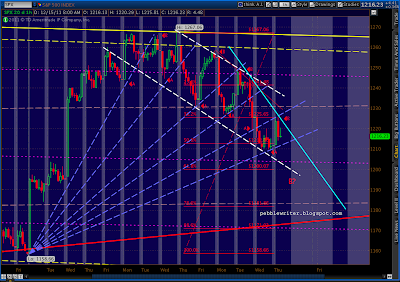 Note how each trip to the channel bottom (white, dashed line) produces a new interim low.  If we draw a line between that new interim low and the most recent significant low — in this case, 1158.66 — we have a fan line.  We’ll mark the point of intersection “A” and the fan lines as the purple dashed lines.

After each new low, the market bounces (otherwise it wouldn’t be a low, but a one in a series of lower prices.)  When that bounce reaches the fan line from the previous Point A, it “tests” it.  These backtests are all marked with a Point B.

Sometimes the backtest reaches all the way to the previous fan line; sometimes it doesn’t.  But, wherever it runs out of steam, it’s now headed back toward the fan line it just created.  Occasionally it’ll bounce there; but, regardless, when it breaks through that fan line it can fall hard and fast.

I mention all this because this morning’s rally is clearly a backtest of the previous fan line.  For it to have any staying power, it must break through that fan line and reach higher highs.  Otherwise, it’s doomed to drop like a rock right through the fan line it just created.  That line runs through about 1212 right now, so watch that price level.

BTW, I’ve added a TL (solid powder blue) to the chart connecting today’s and Tuesday’s highs to create a falling wedge. If it holds, it has an apex of around 1181 tomorrow.   This is our secondary downside target, but falling wedges rarely fall all the way to their apex.  I’m still looking at 1200 as a more likely target.

The fizzle is on. We’ve given up most of this morning’s gains and are fast heading towards negative territory.   We reversed right at the .382 Fib (1225.6 v 1225.65 predicted) and closed yesterday’s gap in the process.

EUR’s bat pattern reversed as expected, with a nice bounce off the upper bound of the channel.  Ditto for the dollar. 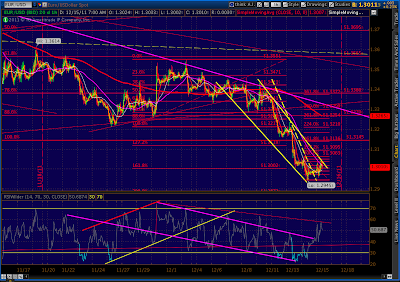 Check out the RSI on the 30-min chart. 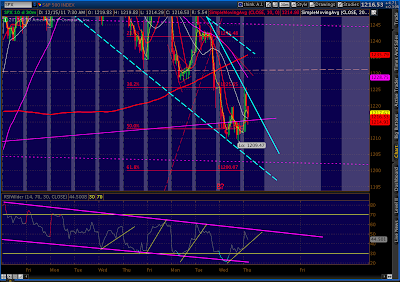 Each trip between the channel lows and highs suggests a trend line that connects the lowest values in the pattern.  As long as RSI remains above the trend line, everything’s good.  But, as RSI approaches the upper boundary of the channel, it has to “decide” between obeying the trend line or the channel.   The channel, being longer and stronger, has ruled so far.

We’re approaching the upper channel boundary again.  So, keep an eye out for a break in the trend line.  It’ll be a clear signal of further downside.  Conversely, a break out of the channel will be very bullish.

The market is going to open up this morning, but will it be enough to break the downtrend?

We discussed the possibility of a falling wedge in EURUSD yesterday.  While EUR is up .5%, it’s possibly just expanding the wedge into a channel.  We’ll see whether it can break out of the solid yellow channel, and whether its RSI remains below the fall-back trend line.  On top of all that, the 60-min chart shows a completed Bat pattern, indicating a reversal at 1.3050. 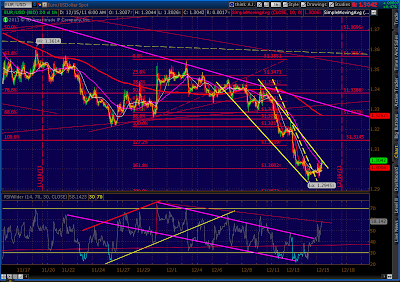 The dollar, likewise, has had a nice move but hasn’t broken down yet — necessary for a significant stock rally.  Its RSI trend line is intact, and it appears to be backtesting the .500 Fib line.  We discussed yesterday the unlikely possibility that DX would zoom through this important Fib line in 24 hours, while the .382 line took weeks.

If this is a back test, and if EUR is still safely in its channel, look for this morning’s rally to fizzle.  In fact, the channels on SPX are still very much intact. 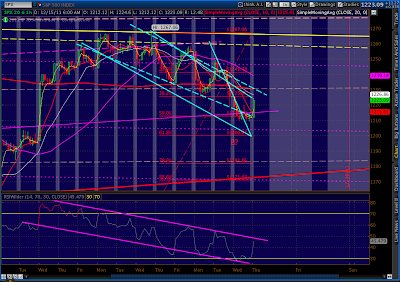 This morning’s bump does a slight amount of damage to the fractal pattern.   If we are heading up, I’d rather it have happened following a lower low than yesterday’s 1209; but, it’s not necessary.  The 1200 figure is a Fibonacci ideal, meaning a 61.8% retracement of the recent rise just like we saw in July.  Yesterday we reached 55%.  It’s close enough, but would pencil out better at the higher Fib level.

If this morning’s rally does fizzle and we head back down, 1200 is well within the current channel’s boundaries today.  But, taking a full day to get there would put us slightly behind the fractal’s schedule.

Unlike the 2007/8 analog, this fractal isn’t running by the same clock.  About 2 days go by in the current pattern for every 3 in the Mar-July time period.  So, a comparison isn’t quite as precise.  I had expected the rise to start by options expiration Friday (tomorrow), salvaging market makers’ portfolios.  But, looking closely at the chart, I think the top of the coming rise should come around Wednesday of next week, give or take.  That leaves plenty of time for a 50-pt ramp job.