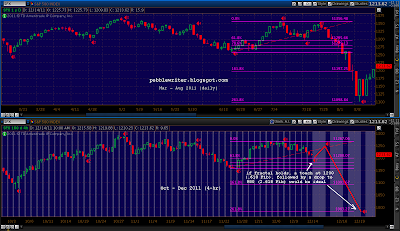 A 275 point plunge is nothing to sneeze at.  So, I’m posting this again in the hopes that having more eyeballs on it will help verify its veracity.   The above chart shows the comparable points.  The charts below provide a better idea of the scale of the moves. 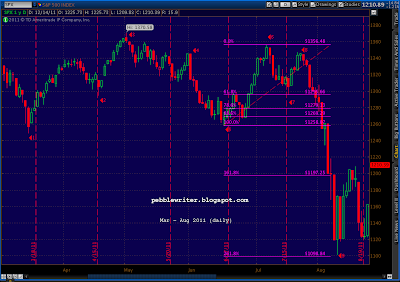 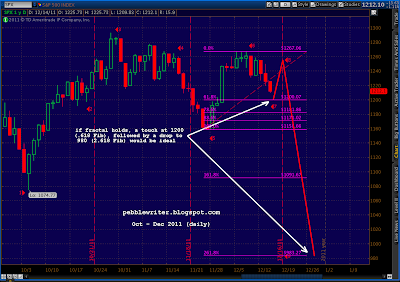 If you just plain don’t believe in fractals/analogs, that’s okay.  But, before you blow it off, consider these posts I made in July after discovering the comparisons between the 2007 top and the 2011 top in late May. 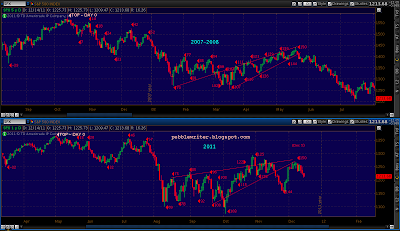 I suppose you could say it worked out pretty well so far.

The one caveat:  this market hasn’t gone exactly as the last.   We had some pretty significant deviations around days 125 and 144.  We could have another deviation, too.  Although the odds are fading, there’s a slight chance we’ll reach up and tag 1307-1313 instead of 1255 before heading down in earnest.  If we surpass 1266, this entire forecast will likely need a major revision.

Bottom line, keep your eyes peeled.  If this fractal holds much longer, there is significant risk ahead for anyone not paying attention — and potential rewards for those who are.

Fresh from the “How ‘Bout That?” department, Citi’s FX Technical Group is out with some analysis naming 985 as a potential target based on a comparison with 1978.  You can read the article here.