Looks like our 4th OPEX in a row closing around 1220.  Coincidence?  I think not.

In basketball, the expression would be “get that **** out of here.”   Investors just rejected the spike to 1230 in a big way, taking us back to flat on the day. 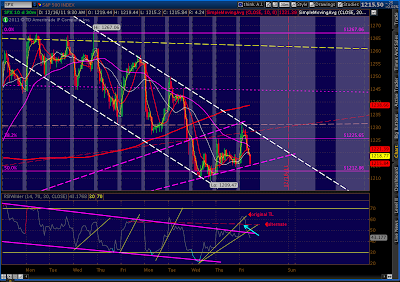 Take a look at the RSI trend line I proposed several hours ago.  I thought it might be a back test of a broken TL, and that’s exactly what happened.  Even an alternate TL drawn without considering a back test has been broken, and from here the market is all but certain to drop.  The only thing holding it up at this point is the fan line off the 1158 lows.  If that breaks, 1200 will be get in a jiffy.

That was a 15-pt assault executed specifically to shake weak bears out of the market.  Puts were sold, shorts were covered, etc. — all so market makers wouldn’t have to take a bath on their underwater positions.   When people talk about market fundamentals and efficiencies, they’re ignoring these games that TPTB play every day.

Notice we back tested the former fan line a second time.  The same thing happened in the closing 90 minutes on the 17th.  We spiked 16 points to 1267, only to give back 36 points the following day as the market was establishing the channel in which we now find ourselves. 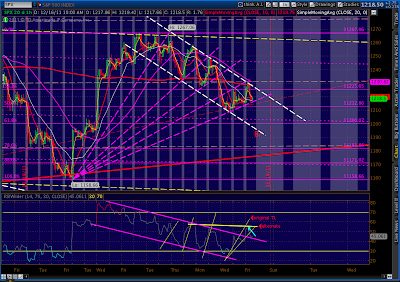 My top scenario is still a tag of 1200.  I anticipate RSI will break the alternate line when SPX breaks its fan line, then skirt along the top of the purple channel without reentering it. It’ll fall some, but not enough to reflect the 20-pt drop in SPX, setting up positive divergence for one last trip back up to a number just shy of the IH&S completion (around 1255.)

Well, we’ve gone to 1230 — as noted below, the highest level we could go without breaking the back test and/or the channel.  While there’s plenty of downside pressure, the market seems content to sit here for now — typical of OPEX Friday.  It’s analogous to a race where the participants line up a few feet from the finish line and wait for the starter’s pistol.

It gives us a little time to review the bigger patterns in the daily charts. 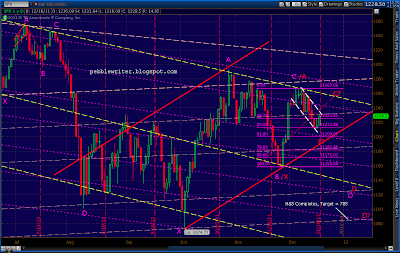 You can see our current little channel drawn with white, dashed lines.  These channel lines, BTW, are at the same slope of many others we’ve drawn over the months, so they’re probably fairly reliable — which means a break out of the channel in either direction will be significant.  It also means the next step up should halt at a parallel channel. 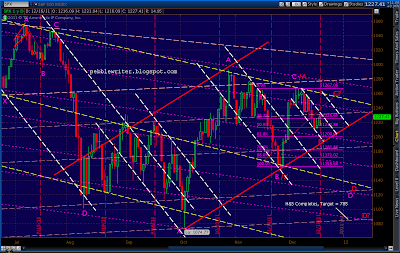 This is worth knowing, because if the fractal between Oct – Dec and Mar – July means anything, the next channel up could be the upper bound of the major channel that takes prices down a few hundred points starting next week.  [Of course, if the fractal (and the 2011 v 2007/8 analog) really hold, the start down began at 1292 — in a sense, the equivalent of May 2’s 1370.] 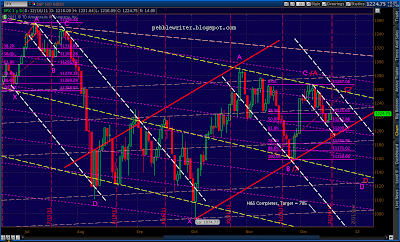 SPX gapped open to match the futures, but immediately started drifting lower.  For now, it just doesn’t have the juice to break out of its channel.  The RSI has broken out of its primary channel for the third time. 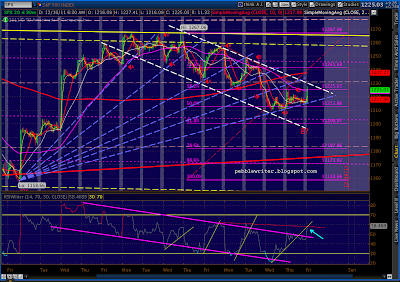 Notice the three little spikes that have corresponded with tests of the upper channel boundaries.  This latest one could be viewed as a back test of the RSI trend line off Wednesday morning’s lows.  It falls in a line with the two previous spikes, and has the effect of potentially setting up a positive divergence if the market will ever get on with the dip to 1200 I expect (post OPEX, it now appears.)

SPX itself is repeating the back test of the trend line before it, and could go as high as 1230ish in its attempt without breaking out of the primary channel.

The Gartley we saw complete on the e-minis yesterday has extended to a Bat pattern, meaning the overnight ramp job should reverse, still within the its channel. 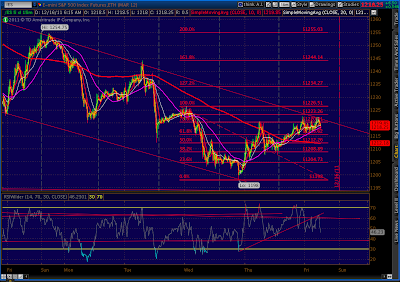 The falling wedge has disappeared with yesterday’s and last nights sideways action, leaving an extension of the same channel that’s been guiding prices lower since Dec 5.  It clears the way for lower prices in the coming days.  Although, today is OPEX (options expiration) Friday, when anything can happen but typically nothing does. 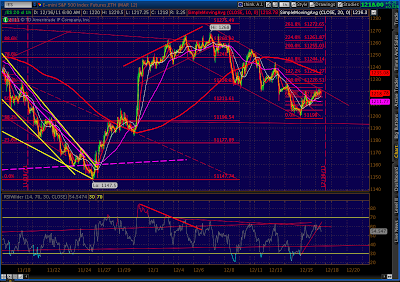 Looking at the 60-min chart, it appears as though the RSI trend line has broken through its rising support.  So, the table is set for a decent drop.

for Curiousmind….Poss fractal for DX? We’re off to a good start.  A similar move off the bottom would indicate a 2.618 extension up to 95.882.  The obvious divergence with the dip between Oct & Nov, vs 2008’s price going parabolic at that point. 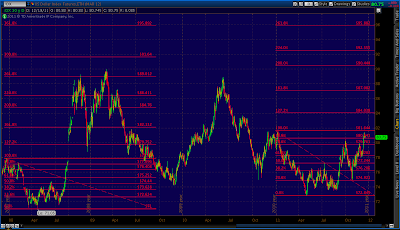