We just hit 1311.71 on what looks like an A-B-C corrective wave, very close to the 1312 back test target discussed at 9:40 below (which, upon closer inspection, should top out around 1313.8)   We’ve also tagged the 15-min RSI TL, meaning we should turn back soon if this bounce is going to be limited to a back test. 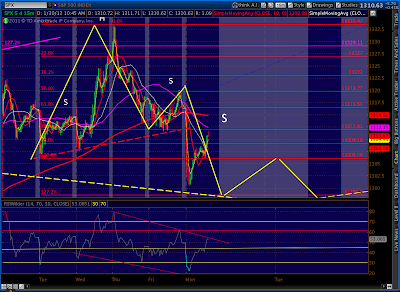 The market bounced at 1300, one of the three levels we were watching, and is currently back testing the neckline of the little H&S pattern that started everything (see first post below.)  The RSI TL is also being backtested, and should provide a clue as to when the back test will fizzle.

If the neckline holds, the next H&S pattern to play out should be tilted the other way — that is, the right shoulder will be lower than the left.  Interestingly, the neckline of this pattern would complete right around the TL discussed in my last update. 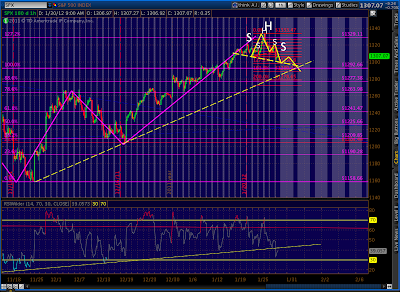 The ability of the market to push through this TL would manifest in a strong decline.  In fact, the target of the new H&S pattern is currently around 1264 — the .786 Fib level of the 1158 to 1333 move and the level of horizontal resistance from Dec 7 and Dec 27. 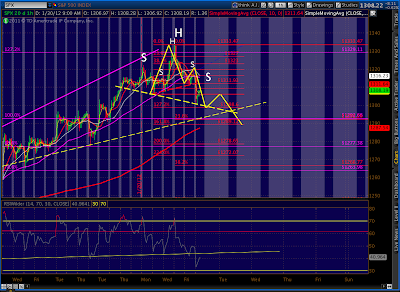 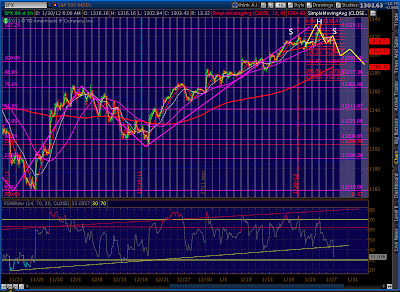 For this decline to really take off, we’ll want to see a break of the TL on the daily RSI.   Note the proximity of the 50 and 200 SMAs.  The only thing that could keep the 50 from peeking (and peaking) above the 200 would be a very sharp correction. 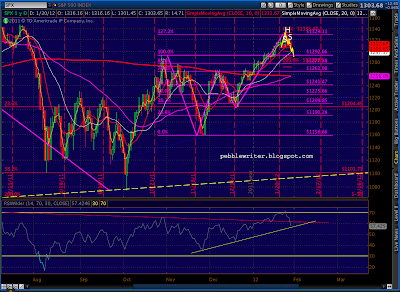 The third is that 1300 should produce a “round number” bounce and, depending on the timing of the decline, might intersect with resistance from a couple of TL’s on the price chart.  We discussed this last week… it would be quite normal to see a pause at the yellow dashed TL that has investors scratching their heads, wondering whether this is a significant downturn or simply the fleshing out of a channel.

The bounce, wherever it comes, will likely take the form of a back test of the H&S neckline (red, dashed) — which means it could go as high as 1312 or so.  It would give bears another opportunity to add some shorts for the next leg down.  Place stops accordingly. 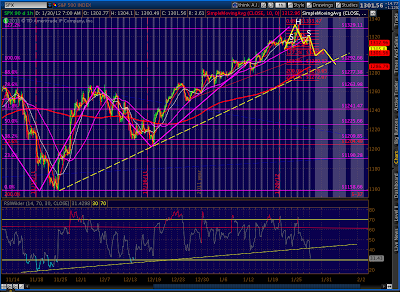 Financials face a similar test.  XLF, which has spent nearly two weeks above its SMA 200, broke its 60-min RSI TL and the price channel it’s been in.  The real test will be to break back beneath the 200 and to break the daily RSI TL. 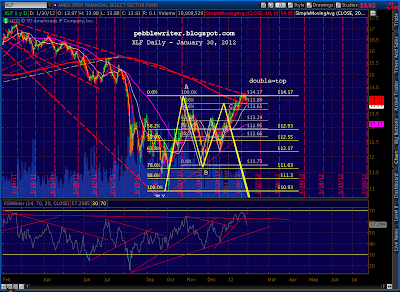 This is a continuation of several posts last week in which I suggest 1333 was the Wave 2 completion.  Taking into account negative divergence on most time frames, excessive bullishness, poor breadth, etc., I believe 1333 was at least at an important turning point.   Almost every indicator I watch is calling for a significant downturn just ahead.  A quick glance at the past few days confirms there’s a clear path lower.

Recall that we just completed a Butterfly pattern (and Bat) that call for a sharp decline.  As we discussed over the weekend, the pattern targets 1010 or 1050.  The question arises as to how we get there. 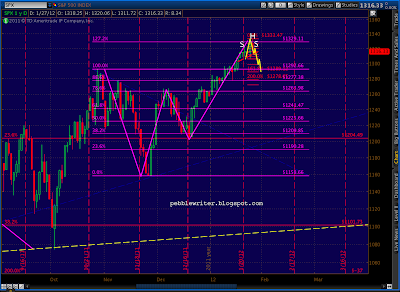 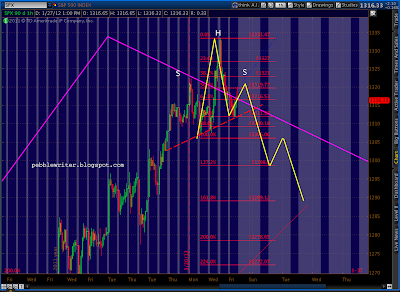 As mentioned earlier, we have a decent shot at some cascading H&S patterns playing out on the downside.  It wouldn’t take much to build some momentum.

BTW, I don’t have a lot of pet peeves, but it kills me (not literally) to see how often the word “literally” is grossly misused.   We’ve all heard someone say “his eyes literally popped out of his head” or “her butt is literally as big as a house.”

Thankfully, the speaker usually means the word “figuratively” or “practically.”  Here’s a promo that popped up on the newswires this morning.  I’ll leave it to my astute readers to decide whether or not the Renaissance Orlando Resort just announced a Valentine’s weekend special for cannibals.

Meanwhile, the Euro-mess continues to display strains between the haves and the have nots.