UPDATE:  7:50 PM
Charles Hugh Smith’s Of Two Minds blog is a delight.  Recently, I linked to his brilliant Dear USA: Your Account is Overdrawn.  Today, he tops himself by providing a sound argument for the incarceration of the most prolific counterfeiter in the world: the Federal Reserve.  Read more at: Counterfeit Money, Counterfeit Policy.

Crickets.  So, let’s take a quick look at gold, which has exceeded the level the channel indicated.   Is the harmonic picture indicating more downside in danger?  Recall that we’re tracing out a Crab pattern marked below in purple.

B1 was a .886 retrace of XA, qualifying it as a potential Crab (although it would be a Butterfly if we throw out the extremely long tail.)  As a Crab, it should put in a Point C somewhere below Point A and then extend to the 1.618 level (or greater) at 1203. 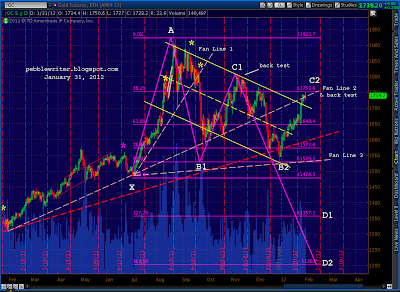 I would be perfectly at ease with that forecast — but for the recent strength that saw it break out of the channel.  Most forecasters I read are calling for continued strength, and there’s certainly some logic to that view.  On the other hand, we can view Point X as the vertex of recent fan lines that argue for further downside.

The Crab pattern is perfectly fine as is as long as prices stay below C1.  If they should exceed it, but stay below A, the pattern is still intact — but with B2 (slightly lower than B1) and C2 as the turning points.  Note that B2 is also at the .886 retrace of XA, and thus points to a D at the same level of 1203.  This scenario is shown below. 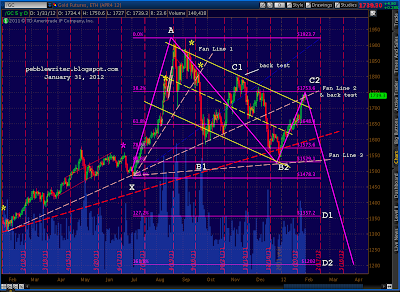 The red, dashed line is a TL that goes back to 2008, so it’s significant that it was recently broken (B2).  A drop back down to test FL 3 would obviously also break the long-term TL.

Importantly, we’re currently sitting at a .786 retracement of the C1 to B2 drop and .886 of the decline from the latest high (1767 on Dec 2) to B2.  Although neither of these moves is in and of itself a harmonic pattern, these are significant Fib levels and, along with the fan line back test, are a good argument for a reversal.

Bottom line, gold, just like equities, is pushing the limits of the patterns that normally guide price movements.  It’s overbought for sure, but I’ve learned the hard way that gold can go on being overbought for a long time after it should reverse.  I believe the short term bearish case is still intact, but have to temper that view due to the channel break.

If prices should break the fan line in a significant way, I’ll be inclined to step out of the way and wait to see if prices reverse before Point A at 1924.  We should know in the day day or two.

VIX is rebounding strongly, about to test the falling wedge at 20.2 or so.  It’s in the early stages of forming a Bat or Crab, which would imply targets of at least 22.68.  It will also complete a little IHS at 20.4 with a target of 23.8. 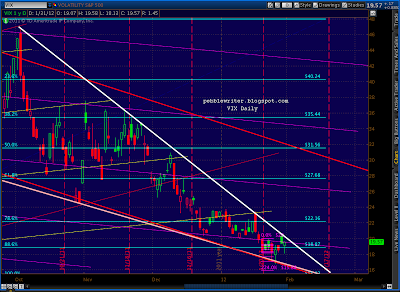 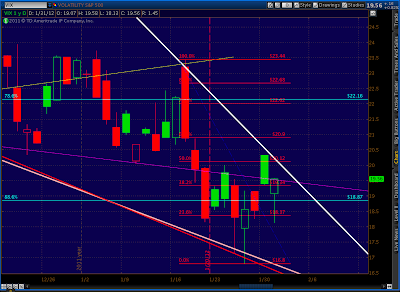 Chicago PMI down from 62.2 to 60.2, the second decline in a row and greater than the drop expected to 61.5.  The improving economy story is getting a little harder to swallow.  Consumer confidence is up next.  UPDATE:  Consumer Confidence down from 64.8 to 61.1.  This should complete this morning’s bullish burp.  Case-Shiller came in at -1.3 for November, -3.7% for the year-on-year.  Total drop since 2006 is -32.9.  Wonder if that might shake Consumer Confidence just a tad. 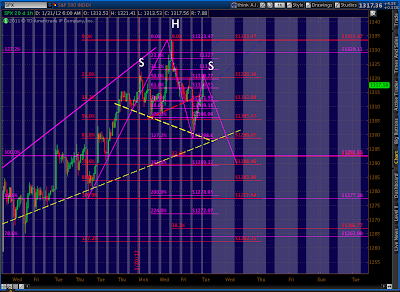 If the new H&S pattern completes, it currently points to 1265ish.

The futures are flashing a 6-pt gain on “renewed optimism over the Greece situation.”   Gotta admit — it’s hard to even type those words given the number of times (all of them, so far) that the optimism has been just plain wrong.

This morning, we’ll see the Case Shiller 20 City Index, which should be negative, and consumer confidence (10am), which might continue to surprise to the upside.  Fellow Americans seem not to realize how deep is the puddle of stinky goop in which the country has stepped.  Chicago PMI is due out at 9:45am.

We’ve filled all the gaps up to the upside, but there are plenty down below.  We closed yesterday below the SMA 10 for the first time in what feels like ages, saw the stochastic and MACD turn over, formed a bearish hanging man candle, and saw the EMA 3 and SMA 10 cross negative.  The put-call ratio remains overly bullish and the McClellan Oscillator is preparing to flash a sell signal.  In other words, most of the negative momentum indicators I watch are now negative.

The case is growing for 1333 having been the Wave 2 top, but the door won’t be closed until we see a significant downturn that destroys the upside case — probably somewhere around 1270.  The SMA 50 has moved above the SMA 200 by 71 cents.  Watch VIX this morning.  It’s done a very good job of indicating major turns, and it’s currently positioned very near the apex of a huge falling wedge, having recently closed below its Bollinger Band.

Now that we’re working on a new H&S pattern, the key will be whether we can close below the new neckline.  It’s the downward sloping dashed yellow line below. 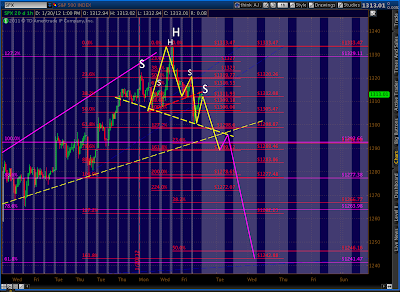