As I noted in last week’s update:

We got the 61.8% Fibonacci retracement yesterday — touching 1202.37 in the afternoon meltdown.  This morning, we’re continuing to follow the pattern, thus far scoring a 27-pt gain to 1233.  Here’s what the fractal looks like today. 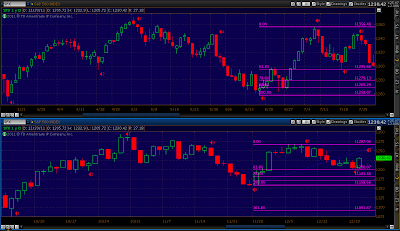 Now, as the rest of the investing world is forgetting about the troubles of the past few weeks, they’re starting to focus on the Inverse Head & Shoulders pattern up ahead.   As we talked about two weeks ago:

I think this would get a lot of people excited, just like similar moves did back in July and previously in December 2007.  Each of those IHS patterns trapped a lot of bulls when they came up 10 points shy of completion. [see: Ten Lousy Points.] 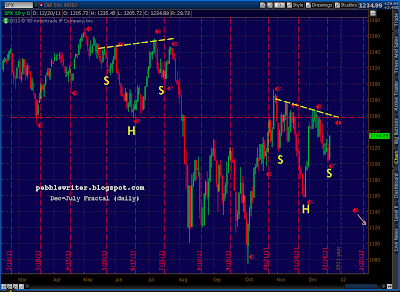 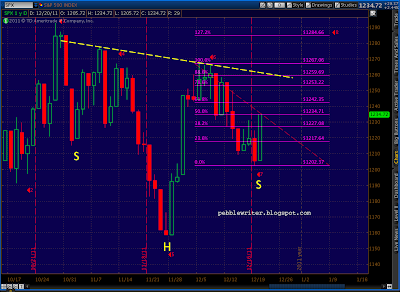 Then, there’s the Fibonacci methodology.  The relevant figures are:

There is corroborating evidence in the VIX daily chart.  Over the past five years, VIX has traced out very clearly defined channels. 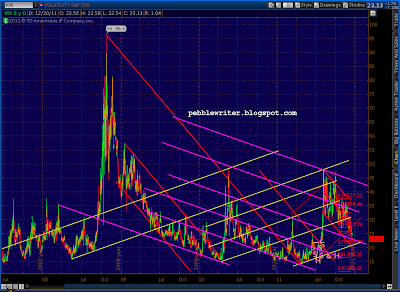 Looking a little closer, it’s apparent that VIX has not only reached the lower bounds of three intersecting channels, but is nearing the completion of a bullish Butterfly pattern (in red) within the last leg of a large Bat pattern (in purple) at 20.88 and 20.66 respectively. 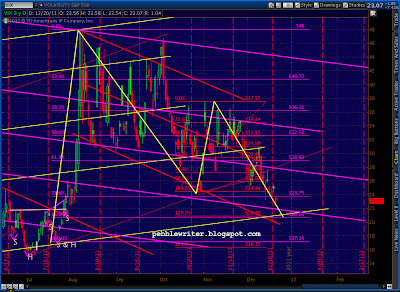 I know what you’re thinking…. we can’t have a panic sell-off without a huge dollar rally.  What’s happening with the dollar?  Here’s our well-worn daily chart, showing all the major channels and fan lines over the years. 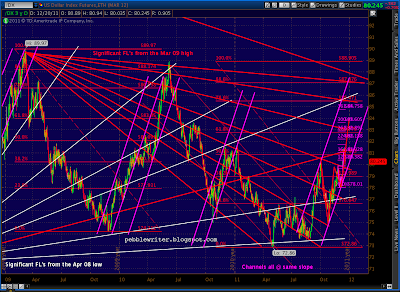 The close-up of the current channel shows the recently completed crab pattern and subsequent (today’s) reversal.  I’m expecting a drop back to the fan line we just cracked.   It might correspond with a touch on the channel wall, but more importantly, it’ll drop below the psychologically important 80 price level (which was tested today.)

It’ll appear to be a game changer, but it’s a dollar bear/stock bull trap.  As the harmonics show, this downturn in the dollar is simply the payoff from a little Crab pattern (purple).  The bigger prize is the larger Crab pattern (in red) that completes at a minimum of 83.872. 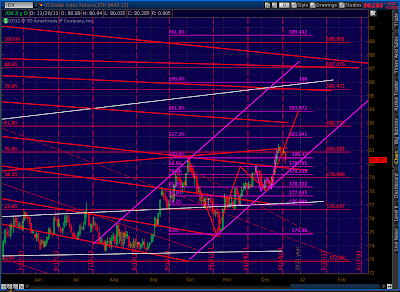 It’ll correspond with a huge sell-off in equities that initially sends SPX to 1181, and thereafter to 983 (if the fractal plays out exactly as July.)

I’m out the rest of the day.  Good luck to all.