The low for the day was 1202.37, just a smidge above the 1200 target.  Volume was on the light side, but this is the week before Christmas.   As mentioned earlier, we have positive divergence all over the place.  So, 1200 still fits as an interim bottom — although the lower target of 1190 (the .786) is still a legitimate alternative. 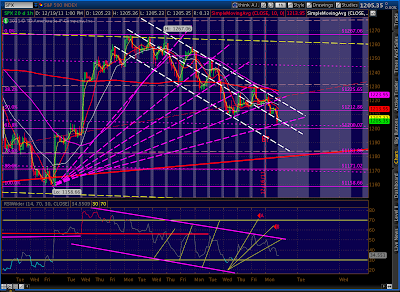 The channel we’ve been following this past week runs into a much larger upward sloping channel tomorrow or Wednesday.  I expect a bounce either here or 1190, and then a more dramatic downdraft to follow.  Stay tuned. 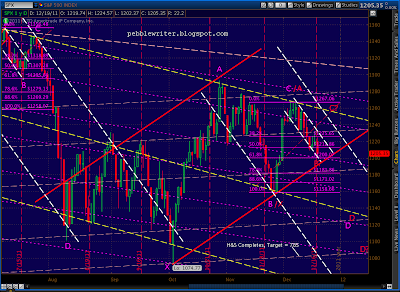 Within 3 pts of our 1200 target and the .618 Fib level.  As expected, there’s positive divergence on every chart between 5 and 60 minutes. 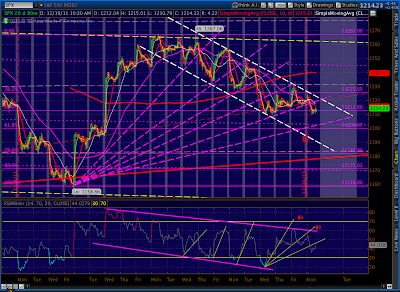 Too early to say, but it appears as though we’re setting up for some positive divergence, meaning SPX will register a lower low while the RSI doesn’t dip to the same extent.   The outcome would likely be a rebound in SPX to match the RSI numbers.

And, an updated peek at our Dec=July fractal… 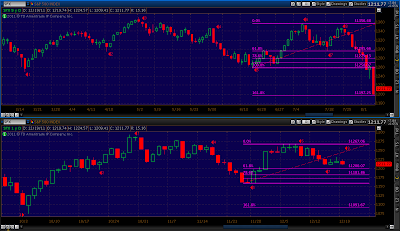 The daily chart shows the approach to the .618 Fib and the large up and down channels.  Just eyeballing it here, it looks like a completion of the inverse H&S pattern would have to happen by Wednesday in order for it to remain inside the downward-sloping (white, dashed) channel.

That fits my timeline just fine. 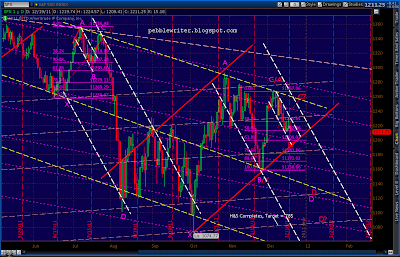 So far, a replay of the past several days.   Positive action in the futures overnight, gap up, gradual sell-off.  Either the channel or the back test of the last fan line runs out of time today. 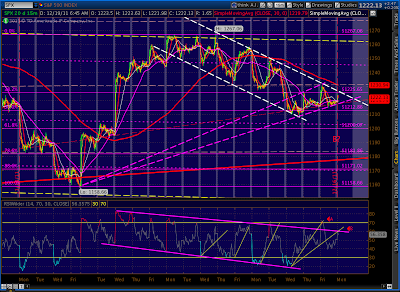