I’ll be traveling the rest of the week, so posts will be spotty.  Here’s a quick overview of the patterns I’m closely watching.  First, the Dec = July fractal we’ve been watching since Dec 7, seen stacked as well as combined on one chart. 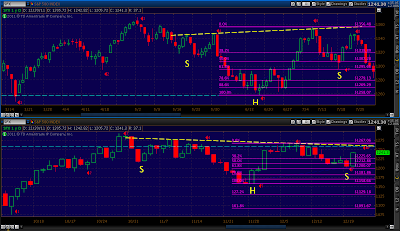 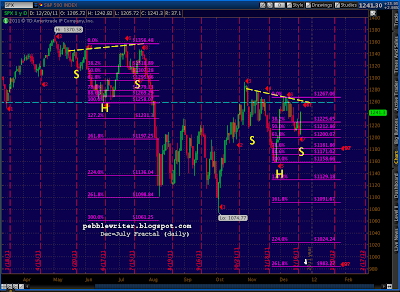 And, here’s the analog that started it all — 2011=2007/8.  This one first came to my attention in May, although it was early June before I started charting it.  There have been some divergences, for sure, but the similarities are spooky. 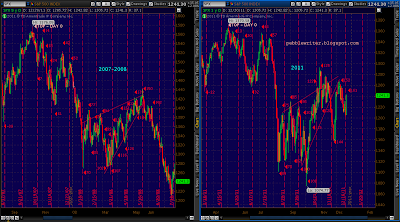 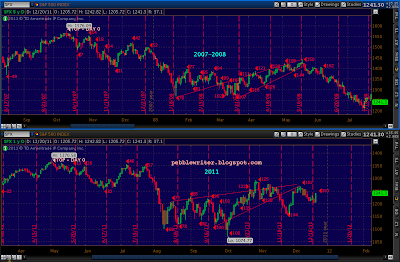 The info is the same on each chart — just different ways of displaying it.  Although I was most interested in the day 150 equivalent, there’s a striking similarity between day 162 in 2008 and 160 here in 2011.

If the analog holds, we’d be looking at a 200 point SPX decline (1041) between now and the end of January.  The fractal leads to the same conclusion, with a forecast Crab pattern completion at 983.

If all this interests you, go back and read the several “Another Fractal” posts since December 7.  Good luck to all.

The channel lines are shaping today’s action perfectly.  The question is whether we’ll add a few points and fill out the white, dashed channel above at 1251-1255.  VIX and DX could both use a little more downside to properly set up their rise, so I’m betting the market rallies just a tad more before the plunge.   But, be careful, we’ve technically met the requirements (with the .618 touch) for the downside to have started already. 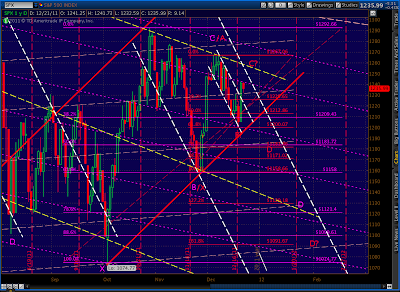