Melt up continuing in what feels like an Apple or Gold-like throw-over…  Watching a rising wedge, crab pattern (just got to the 1.618 extension) and oodles of negative divergence developing on the 5-min chart. 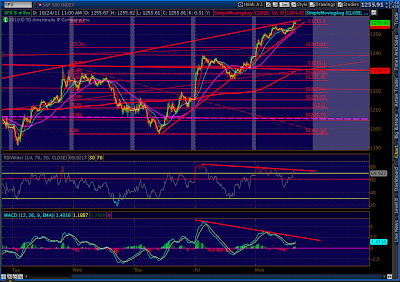 Here we are, in late October, in the general vicinity of our December target.  Talk about too far, too fast.  The next move should be a quick dump to 1197 or so.  But, given the market’s rumor-driven euphoria, who can say when/if rational behavior will resume?

Big news rumors this morning — reports that the EFSF might be increased to 1 trillion euros and/or China and Brazil might step in and buy euro bonds and/or the IMF will jump in and start supporting the euro… blah, blah, blah.

The only real news is that Markit Economics PMI (purchasing manager index) fell to the lowest level and is falling at the fastest rate since July 2009.  The PMI has been a very good predictor of GDP growth.  Manufacturing output, orders, backlogs, employment, confidence — all bad and getting worse. 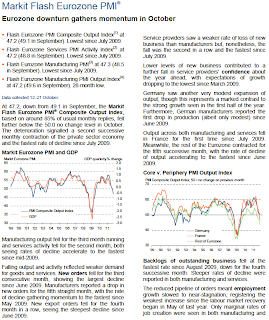 In other words, don’t expect the Eurozone to work itself out of its mess through economic growth.   What will be necessary, says Moody’s, is a lot of pain.  In an article headlined “Euro Credit Pressures Yet to Peak:”

The rating agency therefore expects that severe market pressures will likely persist for the foreseeable future, with the potential for higher long-term financing costs and an elevated risk of constrained access to funding.

That’s a fancy way of saying “credit freeze.”  In the meantime, Morgan Stanley (in a blatant case of book talking) recommended clients go long the Euro this morning, with a near term target of 1.4060 before falling back to 1.30 by year’s end.  The bump was enough to complete a bearish Bat pattern, the third embedded bearish harmonic pattern over the past couple of weeks.

EUR likely maxed out just past the .886 Fib at 1.3946; look for a reversal here in EUR/USD and SPX, which is showing marked negative divergence. 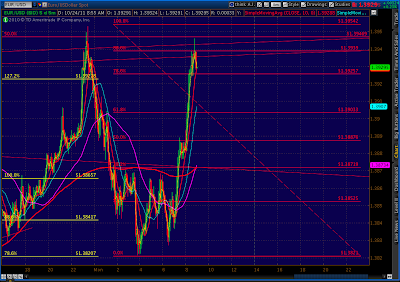 One way or the other, the Brussels befuddlement will drive markets this week.  If you’re a glass-half-full type, the long-awaited solution to Eurozone problems is imminent, and the market is due for a rip-roaring surge that’ll take us to new highs.  If you’re more glass-half-empty, this summit will be like all the rest, ending in a promise to resolve things “soon” that will be followed by… more promises.

I guess I’m more a “there is no glass” kind of guy.  It baffles me how many times the investing public has bought the “this time for sure” malarkey.   One thing for sure, there is no solution to the problem that doesn’t involve substantial write-downs for banks and other institutional investors….unless, of course, the ECB takes a page from Helicopter Ben’s book and simply starts printing (literally or figuratively.)  Neither is good for the Euro.

The harmonic patterns in the markets are confirming said diagnosis.  Take a look, for instance at the dollar index (DX.)  It reached significantly oversold status on Friday solely on rumors that things had been settled.  But, in so doing, it has traced out nestled bullish harmonic patterns. 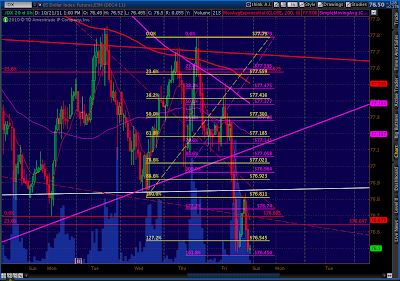 The Butterfly pattern (in yellow) completed at the 1.272 extension, while the smaller (purple) Crab pattern completed at the 1.618 extension.   If you have no idea what this means, don’t worry.  Just know that the dollar, which recently suffered in relationship to a rebounding Euro, is about to snap back in a big way — probably to the 78.61 range.

For laypeople who think this is irrelevant because they don’t invest in currencies, think again.  The Dollar/Euro relationship has been a very powerful indicator of stock market performance for many weeks, now.  Bottom line, a surging dollar/falling Euro has been very bearish for stocks. 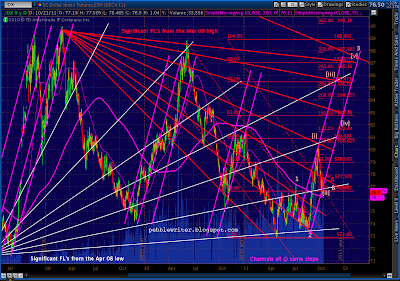 Look for DX to remain in the channel we’ve drawn, with Friday’s dip written off as an aberration.   Next up, the .618 Fibonacci level at 78.989 from Jun 2010, which might represent some resistance.  It’s also the .382 from the more recent October highs.

The EUR/USD, on the other hand, is poised to plunge.  Last week’s attempt to break out of its bearish plunge will fail.   It’s completed a bearish Bat pattern (in purple) at the .886 Fib and a bearish Butterfly (in yellow) at the 1.272 that should see it hit 1.35 within the next few days.  My medium-term target is 1.15 between now and mid-March 2012. 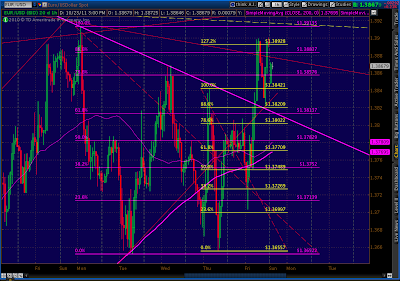 Note the recent 50 SMA cross below the 200, a so-called death cross implying EUR has officially entered a bear market.  The 50/200 weekly chart clearly shows the recent attempt to turn bullish again has failed. 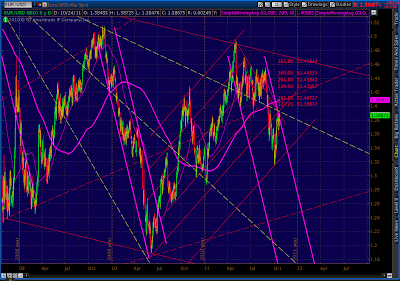 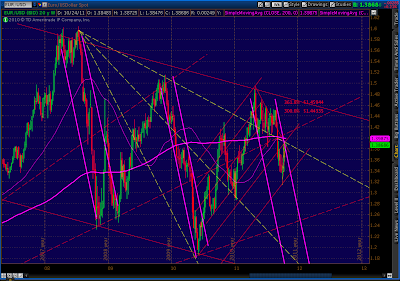