First, props to one of my favorite Daneric participants, Souljester, for the suggestion.

It got me to thinking — sometimes a dangerous thing, but always worth the effort.  Here’s why I think P[3] is happening by mid-September at the very latest and before SPX hits 1436.

First, we all know the big picture.  We’re nearing the .786 retrace (1381.50) of the Oct ’07 highs.   A turn there would satisfy both Fibonacci and create a big, beautiful bearish Gartley pattern. 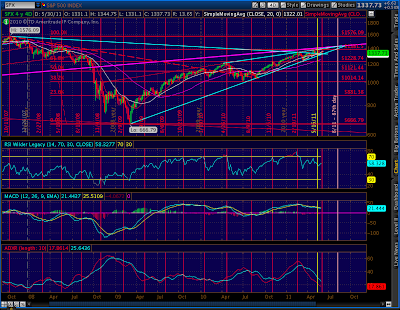 But, so what?  Couldn’t we blow through there on the way to a .886 retrace?  Or extend to a gigantic Butterfly pattern at 1800?

To paraphrase, “rising wedges been bery, bery good to me.”  I know they’re not foolproof, but I’ve yet to be let down by one in all my years of investing.  According to my Handbook of Wedgology, when we break it, we return to GO —  at 1010 or 667.

Third,  the underlying economic picture.  I know, I know.  The stock market isn’t the economy.  But, on a long enough time frame it correlates pretty darn well (as any 80 year-old would attest.)  I don’t think anyone but a press secretary or a Fed governor would argue the economy’s looking up. 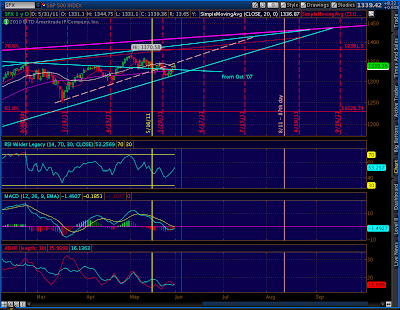 Keep in mind that the study measured the 30 calendar days after each peak, so there’s  a few days left to go if May 2 was it.  And, sometimes the study caught one peak, but there was a bigger one starting a few weeks later (such as May ’09).

There are other little niceties.  Remember the giant inverted H&S pattern?  It indicated an upside of 1436 — hmmm, there’s that number again…  I’ve also noticed significant similarities between the past few months and the tops in 2007 and 2000.  More posts on that to follow.

Bottom line, I feel strongly that the next 3 months will mark a major top — although it could be as soon as this week.  Rarely do rising wedges grow this long in the tooth before the eventual decline; and, like I said, we’re not out of the May 2 woods just yet.

We probably won’t be able to characterize the drop as P[3] until after the fact.  Until then, it might be another significant correction on the way to QE-infused infinity.  But, it should be enough of a move so that wily traders can amass enough dough/gold/farmland to survive what I expect to be very difficult times.