As the harmonics suggested last Tuesday, we broke out of the channel and are up 12 points this morning.  But, we need a breather after this morning’s skinning of the bears.  Short term, the market’s technically overbought.

Tight stops are essential, as we’re within a mere 40 points of what could be the P[2] high of 1381.50 (although, who would be surprised if the 5th wave truncated?)  We’re also still bouncing around within a wedge that dates back to Mar ’09 and currently ranges from 1316 to 1392 — a mere 76 points. Any misstep that drives us out of the wedge would spell the end of the bull market.

Anyone playing the upside here would do well to consider the metaphor: “picking up pennies in front of a steamroller.”

We’re taking a breather, as expected.  Interesting that the pullback occurred right at a trendline (the dashed line below) drawn off the 3/16 and 4/18 lows.  We could look at the action since the recent lows as a backtest of that line. 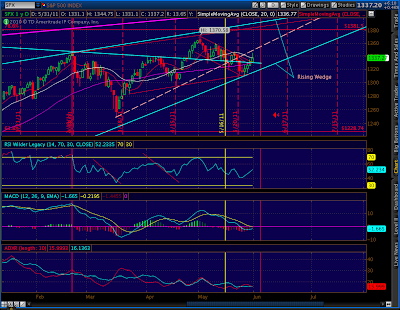 Quite often, these backtests (off trendlines established by important pivot points) are the last up move before a substantial drop.  If we bounce hard and head back down, we will at least test the Oct ’07 trendline, as noted above, and possibly even the rising wedge at 1316. 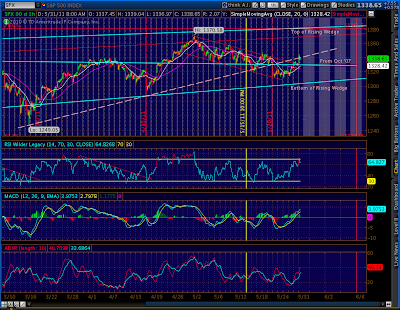 A likely scenario at that juncture would be an broadening wedge, governed by the dashed trendline above and either the Oct ’07 trendline or rising wedge below.   Again, failure to hold the wedge would be disastrous for the bulls.

If, ultimately, we advance beyond the trendline and successfully backtest it, that could give us a base from which to advance to our 1381 target.   But, I don’t think that’s in the cards in the next few days.  If we close up today, it would be the 4th day in a row.  And,  we haven’t had more than 4 up days in a row since the 2/18 top.