↓
Home Menu ↓
Skip to primary content
Skip to secondary content
Home→Charts I'm Watching→Who’ll Stop the Reign?
“BOSTON (MarketWatch) — It‘s cost $600 billion of your money. And it was supposed to rescue the economy. But has Ben Bernanke’s huge financial stimulus package, known as “Quantitative Easing 2,” actually worked as planned? … Turns out the program has created maybe 700,000 full-time jobs — at a cost of around $850,000 each.  House prices are lower than before QE2 was launched. Economic growth is slower. Inflation is higher… Yes, it’s sparked a massive boom on the stock market… But even the stock market boom hasn’t been what it appears. An analysis shows that most of the rise in the Standard & Poor’s 500 Index under QE2 has simply been a result of the decline in the dollar in which shares are measured.  The truth? QE2 has created a massive new bubble in dollar-based financial assets, from stocks to gold. Meanwhile, it has had zero visible effect on the real economy.”

Most investors I know are bullish simply because the Fed has implicitly assured them they can’t lose.  If the economy improves, the market goes up.  If the economy tanks, order up another round of QE, and the market…goes up.   It will come tumbling down eventually, but meanwhile they’re happy picking up pennies in front of the steamroller.

I used to think the Fed was simply misguided (Hanlon’s razor:  never attribute to malice that which is adequately explained by stupidity.)  Now, I believe it’s equal measures of greed (helping out their Wall Street homies) and last-ditch desperation.  How else to explain QE policies that lead the country further into crushing debt, rising inflation and reinflated bubbles — all without benefiting the marginalized?

If the greatest beneficiaries of QE (think Wall Street) reinvested even a fraction of their profits to the recession’s worst victims, I suppose you could say there has been a net “voodoo” economic benefit.  But, judging from the foreclosures, bankruptcies, folks raiding their 401(k) to pay the bills — it ain’t happening. 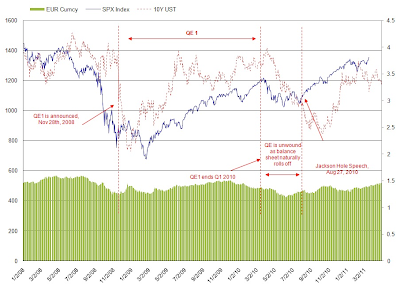 We rant about China’s currency manipulation, but we set the standard — even though devaluing the buck only delays the inevitable.  Congress cheers on the Fed, because politicians serve at the pleasure of their bankster johns  (politicians, after all, declared everything was fine even as banksters stuffed no-doc loan solicitations into mailboxes like peep show hawkers in Times Square.)  Anyone who objects will be back in the private sector faster than you can stop payment on a campaign contribution.

Obama was supposed to stand up to these bozos we bailed out by the billions, but has proven himself inept at best or, worse, in cahoots.  He tries to reassure us, but the folks buying $4 gas and $3 bread know better, as do those whose unemployment benefits have long since run out.  Optimism only gets you so far, and right now we’re running on fumes.  We have more to fear than fear itself.

The list of once-peaceful countries wrecked by protests in the streets grows longer by the day.  At what point do Americans decide the rich are rich enough?  That bailing out an inner-city clinic is at least as important as AIG?  That students are more deserving than for-profit diploma mills, and homeowners deserve a fair shake from the banks that created this mess?  Will we work ourselves up to a little righteous indignation, if not full-blown riots?

With apologies to CCR, “who’ll stop the reign?”