I’ve been watching the dollar’s patterns for months, and yesterday we broke out of a falling wedge that’s been in the works for ages. 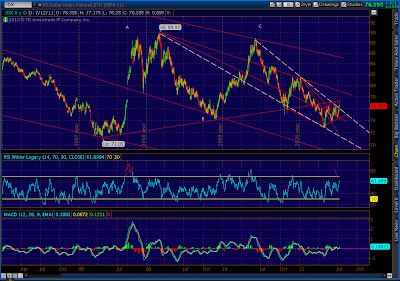 We’ve made many attempts before, but back in late April we started forming a rising channel that’s been guiding us directly to this spot. 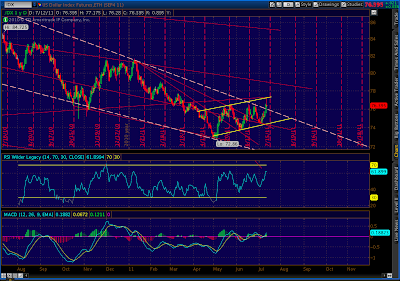 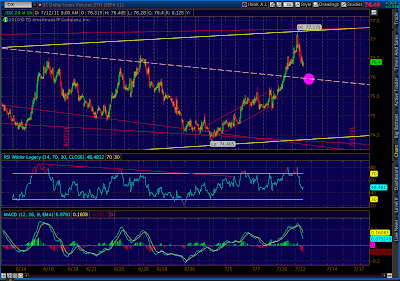 While a fall back to the channel bottom is possible, I think we’re currently backtesting the falling wedge.  I expect this pullback to run out of steam by 75.97 (the circle above) and /DX to begin a strong move up.   Though, its possible the turn will come sooner.  Looking at the intra-day chart, there’s a small falling wedge that looks just about played out. 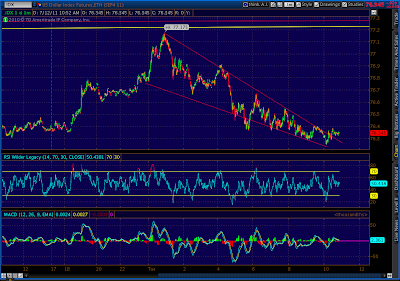 From a fundamental standpoint, the Fed finds itself locked into a tough position, unable to print money at the same pace as before.  At the same time, the Euro’s troubles are bound to get much worse.  We’re probably not far behind them (if at all); but, for the time being, there are no good alternative safe havens to the USD — currently 60% of global reserves.

I know, Gold bugs will argue otherwise.  And, I’m pooh-poohing that idea in the medium/long term.  It’s probably a good investment to hold, even as just a hedge.  But, the other strong currencies are not available in sufficient amounts to act as a global reserve at this point.

My favorite is the CHF, for instance, but there’s only 50BB of it out there — .1% of all global reserves. The Euro makes up about 26%.  The Pound Sterling and Yen are only about 4% each.  And, does anyone really believe the world is ready to embrace the Renminbi?  It may eventually happen, but not anytime soon.  Like it or not, the world is stuck with the USD…for now.

When the dollar does finish backtesting, it’ll be a sure-fire chicken/egg signal that equity markets are ready to roll over for good.   It could happen as early as this afternoon, so it bears a very close eye.