The rally looks to be almost done, with SPX giving up almost all its gains and back to 1318.  We’ve completed a rounding top here, but could complete a larger one if the drop continues to 1313 — where we started the day. 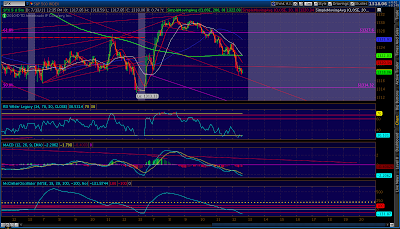 Watching the /DX, which fell pretty hard during BB’s comments.  It seems to have been an overreaction to the possibilities of QE3.  We went down and tagged the 10, 20 and 50 SMAs, are bouncing back now.  I continue to think we’re backtesting the falling wedge breakout and will see the move up continue to at least the 77.5 area by the end of the week. 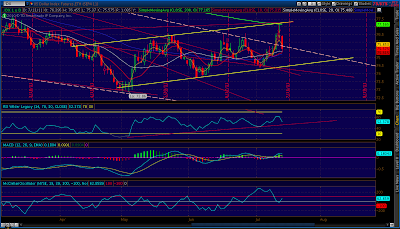 Divergence setting up on Gold intra-day charts.  Could be topping right about here. 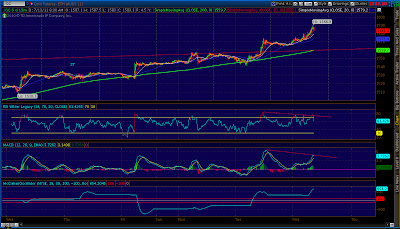 Opened up this morning in what seems to be a corrective wave for the 5 fives down from last Thursday’s 1356 interim high.  We’re also likely bouncing off the 50 SMA at 1314.63.

But, for now, key resistance includes the channel top/trend line down from 1356 and, more importantly, the regression channel midline and 61.8% Fib level — both at about 1327. 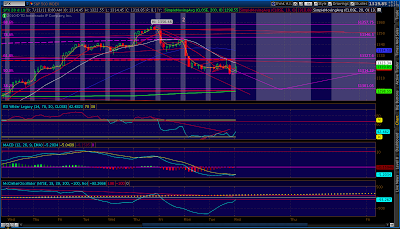 I suspect all eyes will be on Bernanke’s testimony before Congress today.  Key indicator?  The sheen on his forehead and the quiver of his upper lip as he figures out how to put a positive spin on “we’re screwed” — the abbreviated version of “I took $600 billion to fix the economy and all I brought back is this lousy t-shirt.”