And, a quick look at the tech picture…

A wedge that looks like it wants to break, negative divergence out the wazoo and an RSI TL that refuses to yield.  Shouldn’t be long…  (pun intended.)

Just noticed an interesting chart: a rising wedge along with a completed Gartley.  If that old college chum in Redmond or your hair stylist hasn’t sold her MSFT yet, might be a good time to give her a call and suggest she sell it and put the proceeds into TZA.  As in right now. 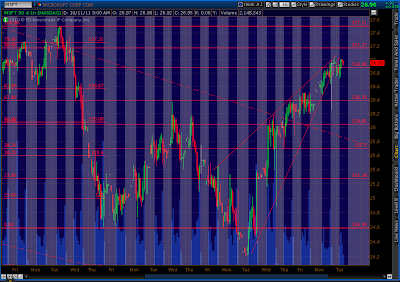 I’m looking at channels, trend lines and fan lines, trying to make better sense of yesterday’s rise.  I remembered that I was ahead of the crowd in calling the break of the trend line from the Mar 09 lows — only to discover that some others used arithmetic rather than logarithmic scales in their charting. In that instance, it was only after we broke the arithmetic scale TL that others saw what I had been seeing.

I prefer log because it’s the method that takes into account the obvious compounding of advances and declines.   The effect can be significant over a longer period of time.  It also might be the cause for my frequently being a tad early.  That might be what’s happening here.

The past five years, charted in the logarithmic scale that I normally use. 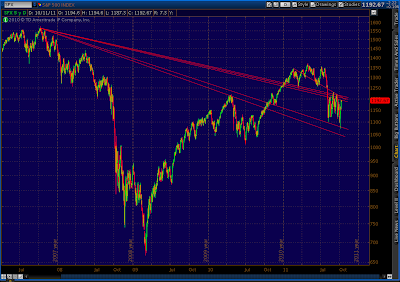 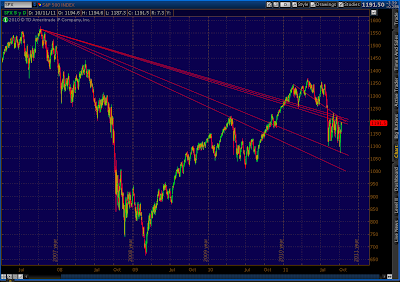 See the difference?  Here’s a close up, w/ log: 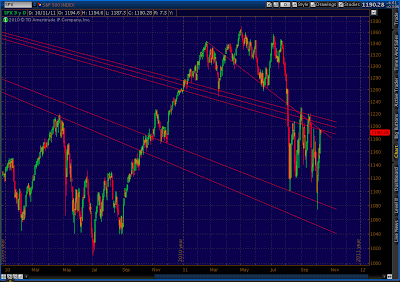 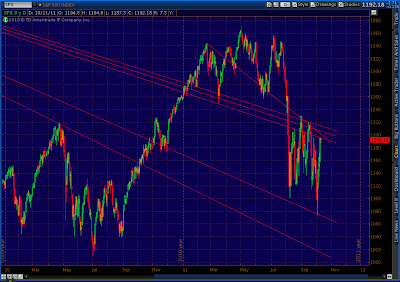 In the log scale chart, there’s not really an appropriate fan line through yesterday’s top.  In arithmetic scale, it’s clear as day.

Also, note the 30-point difference in the target of the bottom-most fan line — the one I have been using to triangulate our 1040 target.  It passes through the very significant 4/26/10 high.  In arithmetic scale, the same fan line indicates a 1010 target.

The intersections with the 2010 horizontal trend lines take an interesting turn, too.  The log chart: 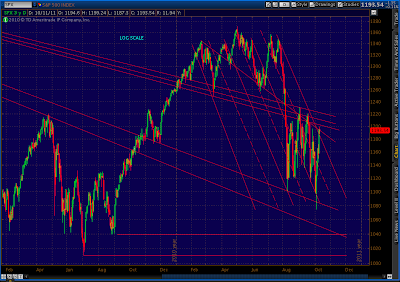 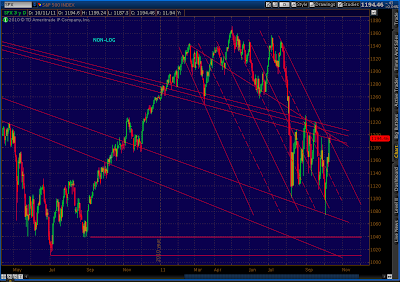 There are clearly implications for the speed and distance of our next move down.

In the meantime, we’re left to ponder yesterday’s huge move up on pathetic volume.  On the arithmetic chart, the fan line from 2007 through the Mar 16 low provided yesterday’s high and might well cap any further advance.

On the log chart, that fan line is several points higher, say 1201 — which is very close to today’s intra-day high.  I can see it putting the kabosh on any further upside, too.  Both cases are good for the bears, and both provide cover for yesterday’s higher than expected run-up.

So… to log or not to log?  Which is correct?  I’ll revisit this question after the next move is resolved. In the meantime, there’s a rising wedge with negative divergence with my name on it. 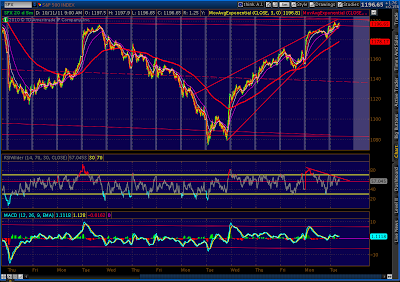