SPY provides an interesting peek at the big picture harmonic situation.  Note that the Gartley target is 93.87. 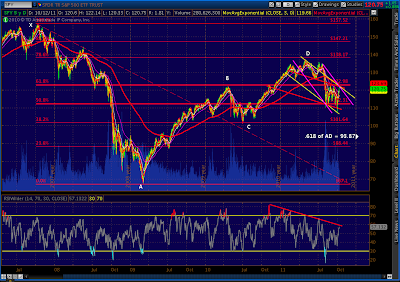 Take your pick of parallel channels.  None of them look particularly bullish. 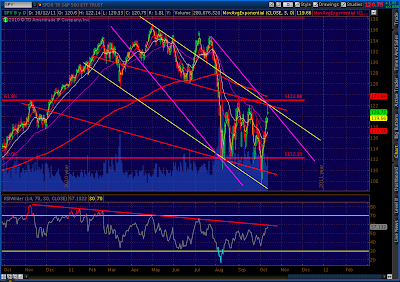 I’ll update the “Path to 350” chart to reflect the obvious widening of the channels for this rally.  Hopefully will finish it by later tonight or tomorrow morning.

Backing out, trying to get a sense of the big picture… 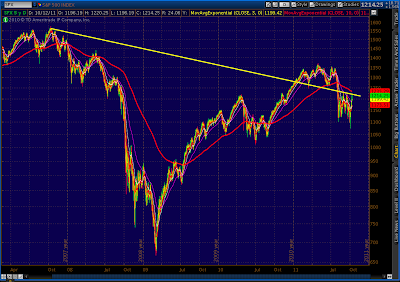 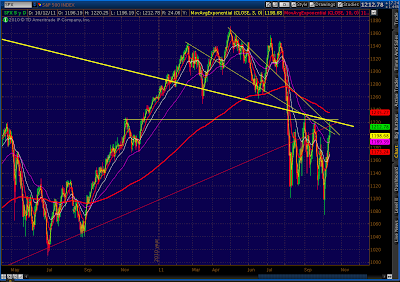 And, the DX picture, on which everything seems to hinge at the moment… 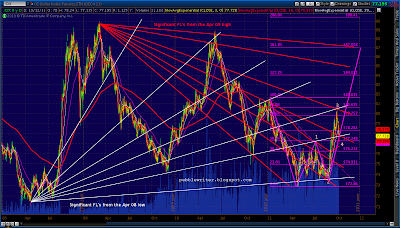 The fan lines from the Apr 08 lows (the white lines) connect with each significant reversal as DX fell from its Mar 09 high at 90 to its November low at 74.  I draw them, then see if they ever come into play down the road.  Most of them do.

Likewise, the fan lines from the Mar 09 top (the red lines) connect with each significant reversal as DX climbed from 74 in November to almost 89 in June.   Again, most of them come into play.  The one that passed through May 7 2010 marked the recent Oct 6 high, labelled as the end of wave 3.

We saw a well-formed Bat pattern play out at very near the .886 Fib level at 80.635 — also at the intersection of two fan lines.  Now, we find ourselves at the .50 Fib level, wondering if the Bat might go on and extend to form a Crab pattern.

We appear to be leveling out around 1210.  The hourly RSI line — already at overbought levels — has been broken and appears to be backtesting. 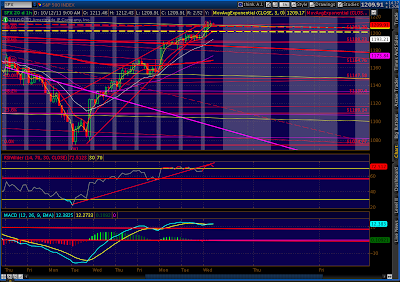 We’ve reached the .886 fib on the largest of the three potential Bat patterns we discussed yesterday.  It’s not a well-formed pattern, but the completion is at 1203. 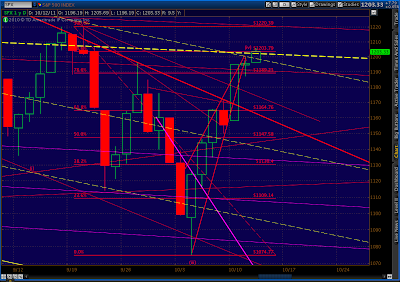 An overshoot wouldn’t be surprising, given the strength of this rally.  Some call it a short squeeze, and I’d have to agree.  It’s happening on very low volume, so it hardly qualifies as a major turn.  I’d normally expect a quick backtest, but the slope of this advance means a backtest could extend beyond the apex of the rising wedge itself.  Wouldn’t be surprised to see it shoot beyond 1210 intra-day. 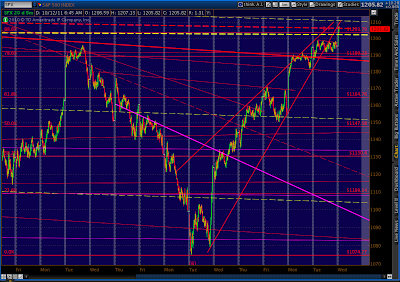 If I’m wrong, then the fail-safe level is the Sep 20 price of 1220.39.  Any higher close than that would probably invalidate my notion that we still have a lower low to put in.

As I mentioned yesterday, this rally feels a lot like those in July.  The start of the climb off the June lows had been delayed by the release from the Strategic Petroleum Reserves, and the act of catching-up led to so fast a rally that it overshot my goal by a good 25 points.

This advance feels extreme, especially coming on such low volume.  On the other hand, we’ve seen the rising wedge expand on us twice.  We’ve overshot my original 1182 target by over 20 points.  The momentum is clearly with the bulls.  It’s entirely possible that I’ve missed this call, and 1074 was the end of Minor 1.

Reaching 1040 by Oct 17 is looking increasingly difficult.  But, I’ve been in this position before — notably on Jun 26 [see: Cliff Diving] when I found myself very much alone, calling for a reversal to the upside.  Regardless of how it turns out, it’s never a good feeling.