Anyone considering jumping on the bullish bandwagon should look carefully at the charts below.

I’ve drawn in 2-standard deviation regression channels.  You might notice that the only key difference between the 2007 and the 2011 charts is that in 2007, the final push rises to the midline, or zero channel.  At today’s top, and I think is is one, we’re right at the +1 channel.  Both are emphasized in yellow dotted lines. 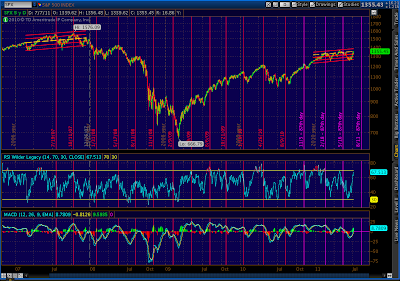 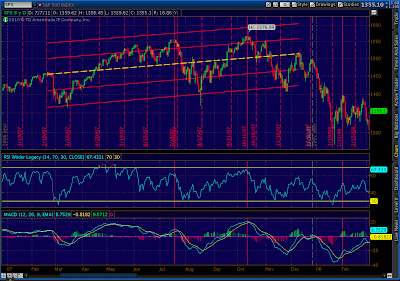 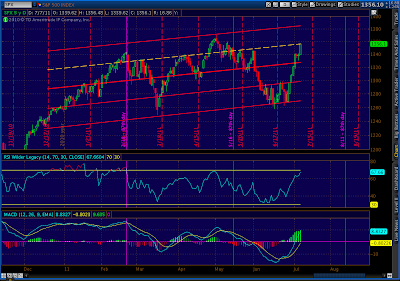 Anyone who slogged through those early posts (here, here and here), where I played around with different means of identifying these topping patterns, knows that I vacillated between regression channels and fan lines.  In the end, I went with the fan lines.

I didn’t discuss it at the time, but I was always bothered by the way the 2011’s top didn’t rotate over to properly match the slope of the obvious fan lines.  The +/- 2-standard deviation channels didn’t line up with the pattern highs and lows.  I wondered if the channel would achieve the proper slope once the pattern was a little more mature.

Today, the channel lines line up perfectly with the fan lines we’ve drawn.  The highs/lows are right at the 2-std. dev. boundaries, and the slope is very, very close to that of the 2007 and the 2001 tops. 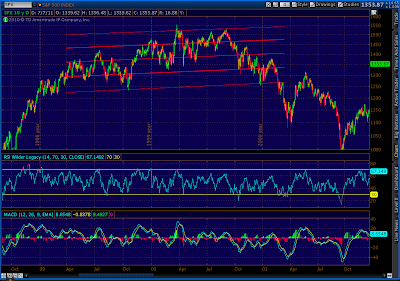 I think we decline dramatically from here.  Between the rising wedge, the divergences, the unimpeded climb on low volume, the Crab pattern, and the Head and Shoulders pattern [details at Confidence Fairies and Snowballs] and this final piece of the similarity puzzle, it’s time to put a fork in this market.