In a Q&A session with Reuters this morning Mohamed El-Erian remarked that:

The confidence fairy has to counter the reality of an economy that still has to de-lever, structural headwinds, concerns about Europe, etc…

The current approach of kicking the can down the road (I prefer rolling a snowball down a hill as it captures the growing size of the problem and its accelerating nature) will not last for much longer in my opinion.

Well, apparently investors everywhere are clapping their hands and shouting “I believe!”  Because the confidence fairy is rising from the palms of Bernanke’s hands, spreading her wings and granting their every wish.

I was asked last night if the IHS pattern with potential to 1351 would outweigh the Crab Pattern that pointed to below 1300.  I thought no, since it is much smaller.  Yet, here we are at 1355; and, I have serious egg on my face.

So, where from here?  While this rise certainly inspires confidence, it takes us further into a rising wedge that I haven’t talked about much before.  It was lacking in upper TL touches, leaving a lot of white space on the left/upper side.  Although a big fan of reversals dealt by rising wedges, I try to stick to well-formed patterns. 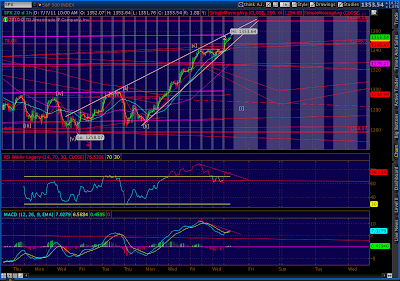 This one is better formed now.  And, judging from both the hourly (above) and the daily (below) charts, it has just about played out.  There are perhaps two more days left before the pattern reaches its apex at — that’s right — 1370. 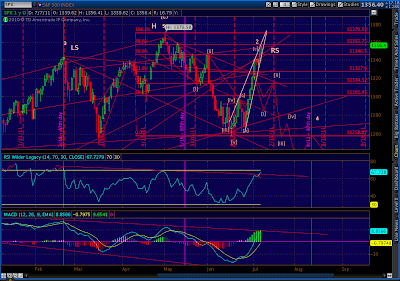 Will we get there?  No, I don’t think so.  From a fundamental standpoint, I believe all the “good news” is pretty much out there; and, I’m a fervent believer in buy the rumor, sell the news.  Further, the news we supposedly rallied on today is the same old crapola we’ve been fed for months, now:  falsified employment numbers (that’ll be revised next week) and impending “deals” that will make both our and Europe’s problems magically disappear.

We’re also nudging up against the next obvious turning point for this rally — the 88.6% Fib retrace of the 1370 highs at 1357.75.  And, the divergences in SPX are becoming glaring, as can be seen on the hourly chart above.  Put it all together, and it seems to me the rubber band has simply been stretched a lot tighter.  When we snap back, it’ll be bigger, faster and bloodier than would otherwise have been the case.

Juncker says the answer is to create an in-house rating agency, so Euro-zone countries don’t have to suffer from the “irrational” actions of those mean US-based agencies.  Luc Coene chimed in, adding that the downgrades (not the credits, mind you) “are bad.”  Kind of like blaming the sword instead of the pirate using it to force you to walk the plank.

In the meantime, a couple voices of reason (barely audible over the clapping).  From the Fed’s Thomas Hoenig:

Hoenig — who is set to retire October 1 — maintained his argument that monetary policy is not a tool that can solve every problem.  In fact, he said he is concerned that “in working to offset the effects of this devastating crisis and to restore the economy to health, an extended zero-interest-rate policy is producing new sources of fragility that we need to be aware of and allow for in our future policy choices.


Hoenig warned that the longer the Fed leaves its zero interest policy in place, the more assets will be defined by these low rates and the greater the negative impact will be once rates, inevitably, begin to rise once more.  With interest rates near zero and additional massive liquidity poured into the economy, all interest rates are affected, he said. This has had a knock-on effect on asset values of every kind are also being affected, artificially boost their value. “When — not if –the adjustment occurs, we will see a dramatic drop in values.”

And, more from El-Erian:

The Euro-zone is truly a multi speed economy. Countries such as Greece are struggling mightily due to excessive debt and an inability to grow; and the current policy approach does little to deal with these issues. And who would have thought that a Euro-zone country would have a rating (CCC) that is worse that a country such as Pakistan.


Portugal and Ireland face similar issues, though the magnitudes are different. These two peripheral countries are already in the Euro-zone’s financial ICU, having both had to resort to bailout packages. And just this week, a rating agency downgraded Portugal to junk status. Again, this was unthinkable just a year ago.

At the other extreme, Germany is doing well. In fact, it has surprised many. It is reaping the benefits of years of economic restructuring and sound liability management. Yet its well being risks being negatively impacted by repeated demands to bail out weaker members of the Euro-zone.


The question for the Euro-zone is how to reconcile these multiple realities; how to deal with multi speeds in growth and balance sheet dynamics. And it is a question that assumes added urgency given that the political decision to address the peripheral economies’ solvency problem using a liquidity approach has contaminated other important parts of the Euro-zone – most importantly the balance sheet of the European Central Bank. Thus, the concern you cite Brian about the integrity of the Euro-zone, including the robustness of the Euro.

The current approach of kicking the can down the road (I prefer rolling a snowball down a hill as it captures the growing size of the problem and its accelerating nature) will not last for much longer in my opinion.


If it wishes to avoid a really disorderly outcome, Europe will be forced to opt for one of two corner solutions: fiscal union, or debt restructuring and, possibly, a Euro-zone sabbatical for at least one (and possibly up to three) of the 17 members of the Euro-zone.  The more Europe delays this choice — and it is a difficult one — the greater the risk that policy makers may lose control of the situation.