The financials have been a huge part of today’s rise.  But, a quick look at the daily XLF chart shows a bumpy road ahead. 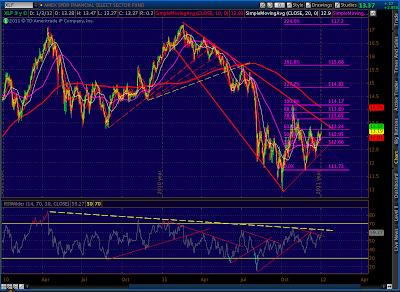 Note the proximity of the upper trend line of the descending broadening wedge.  The last two times that TL have been tested, a severe sell-off ensued.  Note, also, the bearish Gartley pattern that’s formed since late October.  The .786 reversal is at 13.65 — a mere .18 above today’s high.

But, the most damning evidence of all is the RSI trend line.  XLF’s rallies have all come from a break of the downward sloping trend lines over the past two years.  Each of them eventually peters out when the RSI rises to the trend line from the Apr 2010 high (dashed, yellow.)  It’s obvious that the current rally has virtually no room to run.

In other words, this rally should be very short-lived.  I wouldn’t be surprised to see a shooting star candle on the day, followed by a test of the trend line connecting the recent lows.  If it’s broken, watch for XLF to trade sharply lower towards single digits.

This morning’s rise has convinced me to revisit the channel lines guiding this corrective Minor wave 2.  The chart below shows the original in red, along with the revised lines in yellow.  The dashed line is the channel midline — the point at which the SPX has currently come to rest. 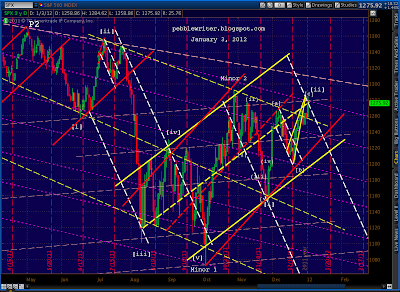 I think these channel lines do a better job of capturing the highs and lows in Wave 2, even though they result in a midline overshoot in the first few days of December.   A good test for validity of channel lines is how well parallel lines worked in the past.  In short — very well. 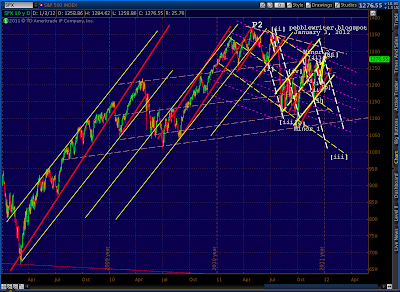 Here’s a close-up of the new channel.  Note the 3-way intersection of the midline with both rising and falling background channels.  It won’t matter to Wave 2 anymore, but trend lines of the same slope will play a role in defining the Minor 3 bumps. 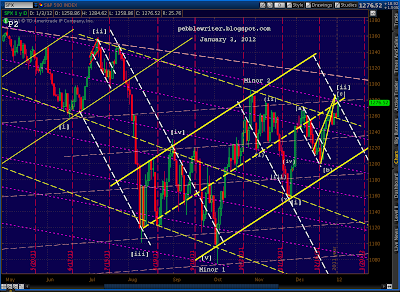 And, the longer term view of the revised corrective channels: 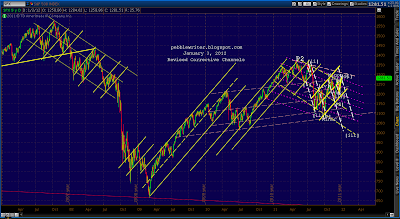 The fan lines from 2007 and 2009 (shown in log scale) do a very good job of depicting the two potential tops of Wave 2.  The red one indicates that a 1307-1330 top is a possibility, while the yellow one argues that the top is already in.  Some of you might remember the yellow line from previous posts, sometimes called the “fan line that just won’t quit.” 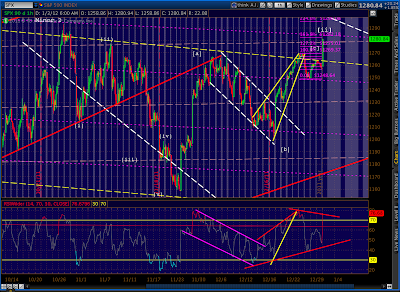 Any way you slice it, that makes for a pretty obvious 5 waves up from 1202.

We got slightly more of a move than I expected from the EURUSD, with a rise to the .886 (instead of the .786) and a perfect back test of the last fan line to have been broken. 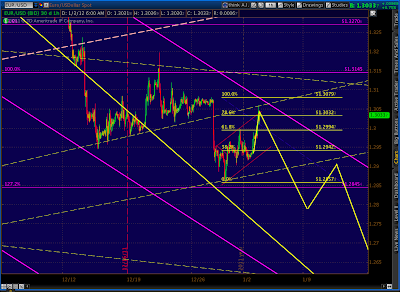 Consequently, the eminis have reached the 1.618 extension rather than the 1.272 which is much more typical of Butterfly patterns. 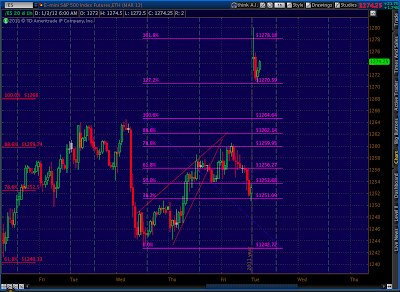 A similar move in SPX after the open would result in 1282 (the 1.618 extension) rather than 1275 (the 1.272).  It would also almost certainly produce some striking negative divergence across the board.  Can we still gap and crap before 1292 is endangered?  ISM manufacturing data will be released at 10AM.

[note:  this post was originally appended to the last Fractal Update post — which was getting a little unwieldy.  I’ve left it both places so as not to confuse folks even further.]

Looks like SPX left us with a Butterfly setup last Friday.  If it plays out, it would reverse around 1275.01 — which is dangerously close to a key Elliott Wave price level (we also have a well-established downward sloping channel line there.) 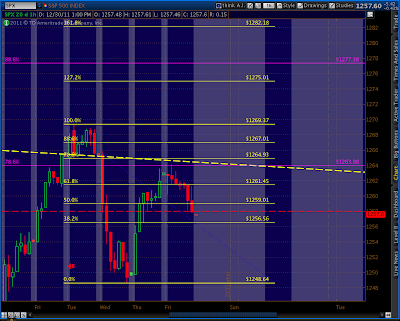 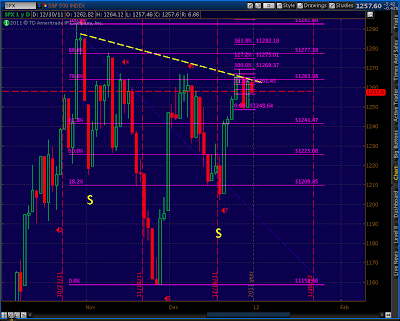 Here’s how the EW count appeared to me last week.  I wrote that we were about to commence Minuette (iii) of Minute [iii] of Minor 3 of Intermediate 1 of Primary 3. 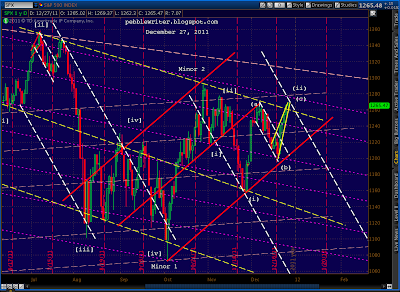 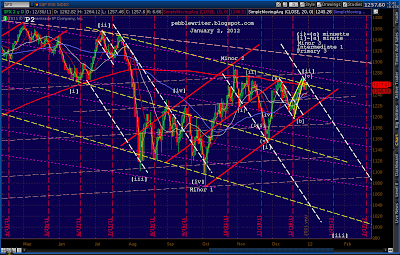 European stocks had a big up day, today, with the DAX up 3% and the CAC up 2%, both on light volume.  The DAX was boosted by a marginally better PMI reading which still indicates contraction rather than growth — particularly in the area of new orders.

The following are notes on the Euro from The Big Picture, posted earlier today:

Last, just a quick observation on the Euro.  Note how the fast lane we talked about last week is marked by a series of decisive breaks of parallel trend lines.  A reminder, this channel is exactly the same slope as the past three two, so I’m inclined to give it the benefit of the doubt. 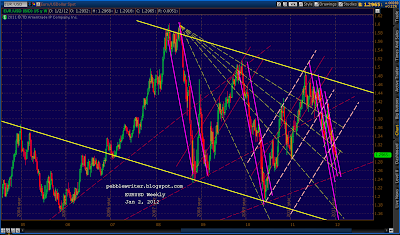 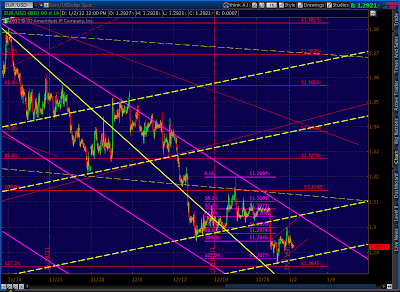 These are worth watching, as lately they are highly correlated with breaks in the US equity markets.  EURUSD seems to have established a new on on the 29th at 1.2857.  It has since rebounded somewhat, and could be tracing out a Gartley whose .786 Fib is at 1.3032 — right up against the channel boundary. 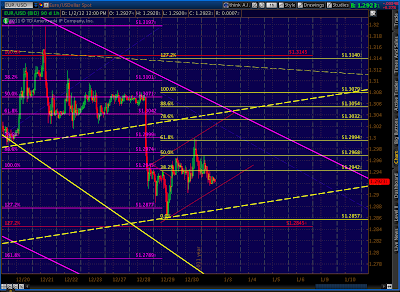 Whether it rebounds higher or not, a break of the dashed trend line is a great indicator of a bigger downdraft to come.  In the end, I expect EURUSD to fall faster than its sub-channel, crossing into the next one down at an accelerated rate as occurred in the last wave down in September. 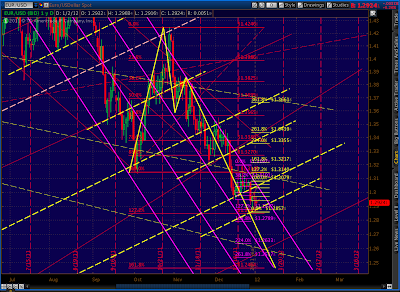 The ideal spot would be tomorrow, Jan 3, as that’s the peak of channel as it intersects with the trend line just broken.  A full back test to the above-mentioned .786 Fib would be the perfect fit for a robust reversal. 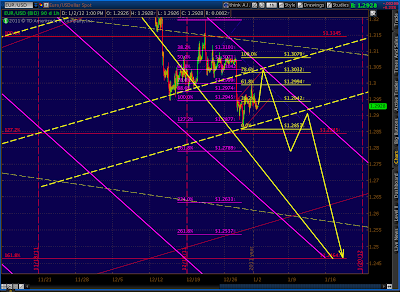 I’m still expecting completion of the Crab pattern (in purple) at 1.2464 sometime around mid-January — a 3.5%+ move that would correlate with a 10%+ move in SPX. 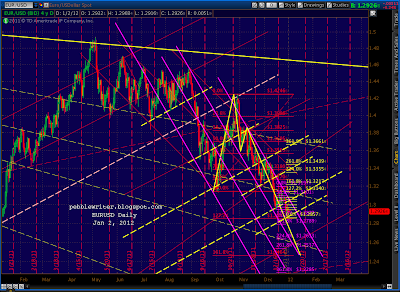 A couple of interesting news/opinion blurbs in the past few hours: 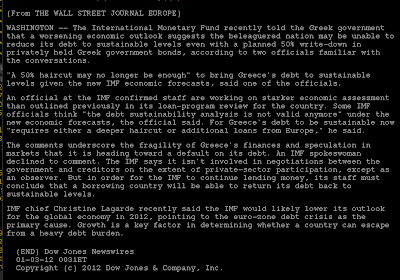 The IMF, stating that the 50% haircut that was supposed to alleviate the Greek debt crisis is likely not sufficient.  This, combined with the Spain not-so-near miss of its economic target on Friday should give Europtimists pause.  According to Lagarde, the IMF will likely lower its global GDP outlook.  As the article points out:  “growth is a key factor in determining whether a country can escape from a heavy debt burden.”  Yes, and in an obvious corollary: “growth is practically impossible when a country is overburdened with debt.” 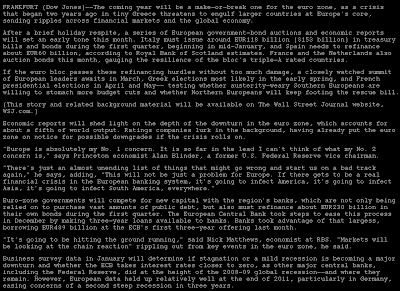 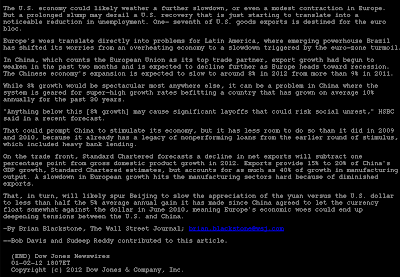